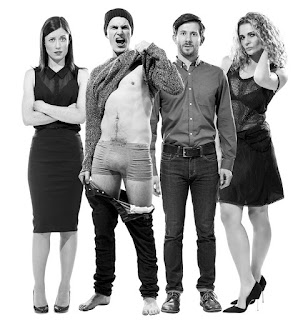 STRAIGHT is a play by British playwright, D.C. Moore, based on the 2009 film HUMPDAY, by Lynn Shelton. Lewis (Simon London) and Morgan (Madeline Jones) own a one room apartment in London, bought at the pointy-end of the market and consider whether they can begin a family. Before anything transpires in that Direction, Waldorf (Sean Hawkins) arrives, dangling his dick through the letter box of the front door and camps with them in a progressive over-stay. He, temperamentally, is a wild-child adventurer, maybe, coming to some conclusion with that persona, and after picking-up a hippy dope smoker, Steph (Danielle Cormack), introduces her to his straight-laced Uni-buddy and after, a puff more, or two, he proposes an 'art' project, where the two men-buddies, will perform for camera, sex, together.

We watch in the penultimate scene of this nearly two hour, one act play, a slow approachment between the two men in a rented luxurious hotel room. The scene has them negotiating how to do "IT" - to have sex together. We watch the slow removal of clothing, one piece at a time, a slow strip-tease, down to underwear, a big hug, and then a kiss, that grows, perhaps, more passionate as they tongue it out. Mmm? What ultimately happens is never shown. We have been baited into a very voyeuristic entanglement. Straight or gay? What are these men? Does it matter? Well, maybe, we need to consider the reaction of Lewis' wife, Morgan, before deciding absolutely about that.

The production is slow and made to be a slightly too excruciating sexual conundrum. Essentially,  STRAIGHT feels like a contemporary comedy of manners, that is yearning to be unleashed at a comic speed. The Director, Shane Bosher, however, seems to want to raise, for a languorous discussion, a more serious and uncomfortable, socially conscious set of questions with the material.

Certainly, talking to others, after the performance, one's own sexual comfort with this material will affect your reaction. If you identify as 'Straight' the play might be a confronting night in the theatre - could I do it with my best mate!? Especially uncomfortable if you are there with your girlfriend - would I let her know!? And even more especially uncomfortable, if you both turned up to this show without any inkling of what the play might be about - WTF?  If 'gay', you might want to shout out, part way through the lengthy hotel scene: "Turn down the lights, or off, and get into bed and get on with it, for God's sake."

The script felt like a screenplay, played far too slowly. One wondered why you would want to put it on the stage. Ultimately, I did't think it justified my time usage, or the use of the talent on stage.

Mr Hawkins, as Waldorf, is slightly over-pitched, especially as Mr London, as Lewis, is very comfortable with the naturalistic (slow) choices forced upon him. Perhaps, Mr Hawkins was slightly chaffing-at-the-bit and over-compensating with the possible alternative to the style and speed of the written text. Ms Jones is a little generalised in her offers and not as clear about her character's evolving dilemma as could be dramatically effective. Ms Cormack appears in only one scene and tends to play tv-acting details that have much more to do with creating for her self with little conscious flexibility in her playing with the other actors to develop the arc of the scene or the story. The character, and the playing of it, does not help the suspicion that Steph, dramaturgically, is superfluous to the needs of the story.

I had an equivocal experience with this production and the play. I would rather have seen the film - at least I could turn it off if I had wanted. Perhaps, the 2006, John Cameron Mitchell film, SHORTBUS, on stage, would be more relevant, I thought, as I walked down the stairs from the theatre, in Kings Cross.Turn it into a play - I dare you.

Go see what you think, there could be some lively debate whether 'straight' or 'gay' (too binary?) especially after a drink (or puff) or two!
Posted by Editor at 6:47 PM