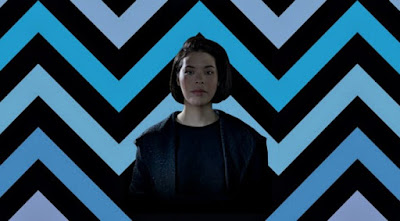 HURT is a new Australian play, and is part of The Hurt Trilogy (HURT; KIN; OUT THERE WILD WILD WORLD), by Catherine McKinnon.

HURT, is set in a hospital waiting room, Designed well by Isabel Hudson, a grey-blue fluorescent bleakness and spareness, lit suitably pragmatically, by Martin Kinnane - with warm spots of colour for character direct conversation with the audience (although, the actors do not always find them to serve their purpose clearly enough!) Three characters, a wife, Mel (Meredith Penman), and her estranged husband, Dominic (Ivan Donato), wait through the off-stage trauma of their child's operation after a car accident, with a relative stranger, Alex (Gabrielle Scawthorn), who has more 'connection' to the circumstances of the story, then first understood by the audience. All the performances are exceptional, deeply committed and convincing, though the play's harrowing dramaturgical concerns become a little overwrought, lacking any real relief, comic or otherwise, to sustain the audience's full concentration.

The design elements of this play and the intensity of the acting of the material of the writing reminded me of a recent production of BLACKBIRD, by David Harrower, that I saw on Broadway earlier this year. And it is in the writing of Ms McKinnon, though relatively skilful, that the quality of difference lies. For, like the characters in BLACKBIRD there is real human tragedy in those of HURT, and like BLACKBIRD, there is a suspenseful reveal of the circumstances of the story. That these characters in Ms McKinnon's play are all "HURT", we are, accumulatively, left in no doubt. But, sometimes, there is a poetic over-reach of image, overdrawn and uncharacteristic to persona, and more nakedly the persona of the writer: e.g. "pools of light" etc, and a risible speech that has Dominic declare that his marriage to Mel has turned to "ash" - for, as it stands in this production at the moment, it is a statement of florid melodramatic poetics, from the writer, Ms McKinnon, rather than the character, Dominic. Too, Ms McKinnon has not created or plotted, Alex's presence in the scheme of the play, with enough plausibility, for us to believe, without patient concession, the interactions that are 'forced' to unravel in the reel of the drama - the popular reputation that Real Estate Agents have accrued, especially in a Sydney context, of the drive to make a sale, is not rebutted by this play, unfortunately, at all!

Kim Hardwick has Directed this production of this play with her usual riveting attention to detail in all of its aspects, but cannot disguise the flaws in the writing of the play. Like the recent production of Louis Nowra's INNER VOICES, at the Old Fitz, this production for Old 505, and its performances are better than the writing. Though, what Ms McKinnon does demonstrate with HURT, the first play of her's that I have seen, is the capacity to tell stories of the real, unflinching pain of being human.
Posted by Editor at 11:24 PM