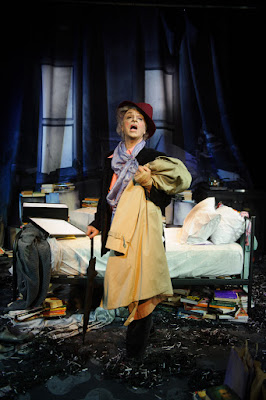 RESIDENT ALIEN is a monologue, a play, by Tim Fountain, revealing to us Quentin Crisp. Quentin Crisp shot to fame at the age of 60 with the publication of his memoir, THE NAKED CIVIL SERVANT. It was later made into a television film in 1975, starring John Hurt. Crisp moved from Britain to live in New York, fulfilling a 'dream', late in life, dying there at the age of 90.

This monologue introduces us to Quentin Crisp, living in New York, in his disgusting bed, watching Ophrah Winfrey, in a small, decrepit room. He chats to us while he changes into clothes to keep a luncheon appointment with a Mr Black and Mr Brown. A free lunch being, it seems, a regularity and a necessity for his survival, the cost to the curious who wish to meet him. They disappoint him and do not turn-up. So, we watch him undress, and prepare a frugal meal on a gas stove in his room. During that time we are regaled with Mr Crisp's views of elements of the society, the world he lived, lives in. Essentially bullied because of his 'effeminacy' all of his life, he decided to embrace his difference blatantly and defy the hostile world around him. He dressed as he wished, he said what he wanted. When his simple presence on a bus offended, he'd reply, "If you like, I will get off the bus at the next stop, but even people like me can't walk everywhere." Famously, he has said of himself: "If I have any talent at all, it is not for doing but for being."

The Director of this work, Gary Abrahams, in his Notes to the production says,


Quentin Crisp is a hugely conflicting and conflicted figure. On the one hand he was celebrated and lauded for his flamboyant style and unerring stance of self-celebration. On the other hand, he was viewed as a bitter, jealous old queen who lived a miserly and filthy existence, who refused to wave the flag for gay rights and liberation, and who held contemptible views on homosexuality and the aids crisis of the 70' and 80's.

Indeed, Quentin Crisp is not, necessarily, a very pleasant individual to know - in fact, many of us will have met others like him in our worlds. It was, in my experience of observation, best and easiest for most people, to shun them in their determined decision to be, uncompromisingly, themselves. They made no one's life better (or easier) to be in continual close contact - to be a friend. To know them, like it was to know Mr Crisp, was only for the most determined. It could be - was - difficult to be with them. And it is true that Quentin Crisp, kept people at a deliberate arm's length and died almost completely alone.

The question that Mr Abrahams poses is "So what can a theatre piece give an audience about Mr Crisp that cannot be already gleaned from his many books and the hours of footage of him so readily available on the world-wide web?" The answer after watching RESIDENT ALIEN is, not much, I'm afraid to say. The content of this work, by Tim Fountain, may be interesting to some who do not know anything of Mr Crisp, but for anyone else it can simply be a regurgitation of some acerbic, maybe, sometimes witty, usually cruel, observation about life or persons, but not much else. There is, true, the oft-asserted thrust of the work, which is to have us hear his maxim: to look internally, into one-self to find who you are really, and to be happy, as he says he was, with that owned identity. The unique identity that he forged defiantly, and then consequentially, stoically endured.

The reason to attend RESIDENT ALIEN then, is to embrace the skill and courage of Paul Capsis as he negotiates his way through this over honorific text. Made-up with the grotesque aged face and the signature hair-wig of the favoured image of Quentin Crisp, and re-creating, from close study of the actual man, all of his physical and vocal tics, at age 90, Mr Capsis brings an inner human capacity to the characterisation. Whether this warmth is one's response to Mr Capsis himself, or that of our learned response to Mr Crisp, is a point to argue about.

English eccentrics (any eccentric) are always a fascination. Last year, I attended a production of Australian musician, Malcolm Williamson's opera ENGLISH ECCENTRICS (1964), at the Sydney Conservatorium, Directed by Kate Gaul, and would thoroughly recommend your acquaintance with it. I have a fascination with these people but rather appreciate more, those eccentrics that have searched for their unique identity and had a talent that was satisfied with more than just 'being', to quote Mr Crisp, and, instead, made an effort to do something positive with that satisfaction, other than, occasionally, securing a 'free lunch'. I could no help but think of GILBERT and GEORGE and their eccentricity and their extraordinary output of 'Art' that will endure beyond the cult of their eccentric personalities.

Despite my reservations with the play by Mr Fountain, I would recommend that you go to see Mr Capsis, in all the glory of the Set and Costume Design, by Rosmanie Harper, and the Lighing of Rob Sowinski. Mr Capsis is as captivating as usual - his talent resonates and radiates this presentation of The RESIDENT ALIEN: Quentin Crisp.
Posted by Editor at 10:41 PM