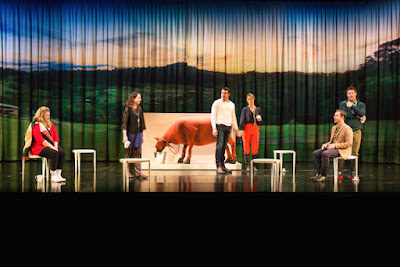 THE BEAST, written by Eddie Perfect, began as a project at the Melbourne Theatre Company in 2013 and has now been taken up by the Ambassador Theatre Group on a commercial run - a rarity in Australia, indeed - which is, at the moment, playing in the Drama Theatre, in the Sydney Opera House. This is a new production and new casting from the original. The publicity blurb on the web-site tells us that THE BEAST is a…

There are enough press-button subjects there to make a mark with most audiences of a privileged kind.

Three couples: Simon (Rohan Nichol) and Gen (Christie Whelan Browne), Rob (Toby Truelove) and Sue (Heidi Arena), Baird (Eddie Perfect) and Marge (Alison Bell), having the where-with-all to move from the city to live in a lush country setting in beautifully designed houses, have a dinner party using the meat of a 14 month-old calf, that they bought together and had raised, they believe, as an organically grown specimen. To signify their commitment - they go to witness the killing of their animal, but as the butcher is a no-show, they themselves, butcher the animal so as to keep to their tightly planned schedule for a gourmet feast. To say the least they are amateurs at the task and chaos ensues. Bloody chaos. Later, with beautifully matching wines they celebrate their 'good life' in Simon and Gen's home. But humans being human they cannot leave enough alone and over the mastication and guzzling of the fruits of their wealth, cracks of rivalry, reflecting the virtues of this privileged class: greed, envy, jealousy, covetousness, power dominance, bring an unhappy shroud of darkness and cruelty to the proceedings, culminating in the re-telling and re-enactment of the bloody murder of a man by some of these couples along with confessions of cannibalism!

I have always been a fan of Eddie Perfect (The BIG CON; KEATING! THE MUSICAL; DRINK PEPSI BITCH; SHANE WARNE THE MUSICAL; MISANTHROPOLOGY). His acerbic and ruthlessly outraged critique of some of the world about him (as writer and performer) has often been breathlessly and transfixingly paralysing as a slap-in the -face, a shock of the breaking of a taboo by speaking about it - so shocking that one's only reaction could be laughter. That this effect has happened for me - the permission for myself to laugh at his daring outrageousness - probably has to do with the Cabaret or Musical Theatre form that his work is usually cushioned with. The use of the music, maybe, softening the skewering, the ugliness of the truths that he writes of.

THE BEAST has been promoted as a play - it has no music, songs etc - and the Director, Simon Phillips, believes according to his program notes, that it has "the focus of David Williamson, Alan Ayckbourn or Neil Simon" and has the "iconoclastic extremity" of "Joe Orton, Martin McDonagh or even Ionesco" and asks us to think of Jasmina Reza's plays (ART, GOD OF CARNAGE). My experience of this performance is not so much of a play but, rather, a series of extended satiric sketches played over two and bit hours carried by cartoon caricatures of the type of the family Simpson and their familiars on television. There is little social comedy here in the sense of any of the aforementioned authors and their works, and it seems, to me, an enormous stretch to see it as anything more than social satire of the baldest and boldest writing - all magnified in extremis with no backstory or real plotting that 'a play' demands. Re-iterate: all of the characters are recognisable types in exaggerated circumstances - comic exaggerations with no naturalistic observations of dramatic construction of character-development or plot revelation, mainly mouthing comic zingers and inappropriate observations that are a kind of shock-grenade tactic to spark laughter. It never has a real world or real people to be shaped from. The world we meet in this production is that of a blazingly satiric strip comic. What a pity Marge in this work was married to a Baird, not a Homer!, I thought.

I guess I was less and less amused by THE BEAST in the Drama Theatre, having left the real world out doors, putting aside my concerns with the animal cruelty of the live cattle trade, or the Grey Hound Industry, or the terrorist attacks throughout the world witnessed on television in graphic human collateral damage, or the recent stabbing murders and injuries in the local suburbs of Sydney (even in my once local suburb of Ryde), and hoping to be confronted by the assured steadiness of Mr Perfect's usual balance of comedy and social comment. Rather, we were confronted with a work illustrated with storm showers of blood (especially if you were in the front rows) and a spray of shit, and been served up this material - this extended bloody killing of a calf on the stage, and the continued stabbing of a man - and finding the audience not shocked but laughing as if they had seen nothing so funny, so hilarious, ever, in their lives. I felt that I was, whilst being in the iconic building of the Sydney Opera House, sitting with the privileged in the city Capitol of Panem from the world of THE HUNGER GAMES, instead. The privileged few able to laugh at the brutalities on other species as well as ourselves without responsibility (or any pause from mirth, at all) - the continuation of the world of the laugh-out-loud regular humiliation of so much of our reality television shows. Mr Perfect, says,


I wrote it because I want to call up the worst of us so that we can see ourselves in it, laugh at it, deal with it, roll around in it and emerge relatively unharmed.

The observation I made of my audience, was that they laughed, but never saw themselves, never dealt with it in any confronting manner, and did roll about in it and, for certain, came out of it relatively unharmed. They had had a good night out, felt good about themselves and questioned not one of the politically incorrect 'cracks' but rather approved of them as funny hilarious, without any second thought of the satiric edge of it at all. In other words the satire seemed to have had no complex reality to give it a knife-blade edge to provoke thought of "What are we laughing about?"  They were probably Texting, Face-booking, or Twittering as they left the theatre to their friends that they ought to see this show - it is SO funny.

The work lacked the turning point, in either the writing or the direction, that may have shocked the audience to take more seriously what Mr Perfect was hinting at: that he "... finds humans embarrassing at best and downright detestable at worst. ... [that] we can justify all manner of ethical, moral and factual contradictions. ... [that, we can see] " a cute baby lamb at a petting zoo is fun one day and food the next. ..." For unlike the work of Williamson, Ayckbourn, Simon, Orton, Reza, perhaps even of Ionesco, this work by Mr Perfect simply encourages the audience to laugh, not think. He has not found the way with THE BEAST to have the audience to have the kind of shattering check to its unbridled response to the material that he has managed in his Cabaret or Musical efforts. I left the theatre extremely dispirited and slightly panicked. The Olympic (Hunger) Games of Rio de Janeiro was waiting for me on my Television and I guess I should ignore the social, cultural and political surrounds to that International event just as most of the audience ignored the social ramifications of that which Mr Perfect and Mr Phillips had served up for us at the Opera House. (Goodness knows what they would make of the Bob Fosse film of the Kander and Ebb's CABARET!)

All the performances are safely comic. Especially the bravura farcical creation of Heidi Arena at one end of the styles evoked by Mr Phillips, to the dry and clever work of Mr Truslove at the other end of the palette board. To me, the only performer who thought she may be in 'a play' and not sketch comedy was Alison Bell, and consequently, her good work appeared odd, in contrast to the others - despite some of her ball-breaking material. Mr Nichol was a consistently unvaried obnoxious antagonist, Ms Whelan Browne two-dimensionally insipidly downtrodden, and Mr Perfect did well enough with an inconsistently written turncoat. While Peter Houghton, in a number of different roles was vulgarly hit and miss with his tasks - particularly, unfortunately, with his role of the Skipper, he just didn't seem to know what notes to strike with it - to find the right tone (maybe this is where the audience was derailed, desensitised?) or is there a problem with the writing?

The Design by Dale Ferguson was a series of portable mobiles, on a black gloss floor, that the actors had to push-drive to create the different settings - they had a very busy night, as did the stage crew in mopping up the fluids and breakages of the action, even with one of the audience helping out by placing glassware back on the stage from the auditorium! All of the mobiles and furnishings are backed by scenic-illustrated, retractable curtains, looking like a-la-kind-of-paintings of a David Hockney 'brushmanship'. This Design was lit with a trendy commercial event  look - it has a kind of wealth gleam - with little human scale intimacy, by Trent Suidgeest. One should mention the Puppet Design and Construction of the fatted calf by Orlando Norrish - very, very Play School, Sesame Street.

THE BEAST, an extended television sketch show, will be a hit for some and not for others. It certainly fits the traditions of the Comedy Festival that emanates from Melbourne that is often on our television menus. Oh, for the sophistication of Ms Reza, the wit and play construct of Orton, the experiments of content, style and formulations of Mr Ayckbourn, the character and situation comedy of Mr Simon, let alone his musical expertise to create a laugh, the sociological and 'musical' accuracy of a lot of Mr Williamson, the political nouse and dramatic construct and character development of Mr McDonagh, - his ability to tell a story with satirical/political edge - or, of the sophisticated absurdity of Ionesco. Even, oh, oh, oh, for Mr Perfect and his usual marriage with music. Next time, perhaps.
Posted by Kevin Jackson at 10:00 AM