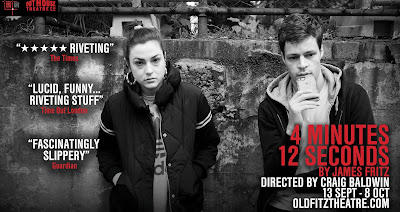 This is the story of a mother, Di (Danielle King), with a husband, David (Jeremy Waters), and their son, Jack - who we never meet. The son has had a Facebook post that has gone viral. The content is not pleasant, the ramifications are huge. Di, a 'helicopter' mum, decides that she must intervene in the social consequences and 'clear' her son's reputation. All is not as she has 'dreamt' and like an 'Alice' falls down a 'rabbit-hole' of confrontation that shifts all her presumptions of her life and her relational perceptions in it, in a devastating way. Social and ethical values are put under scrutiny in a very relevant and contemporary way as the play in short, sharp scenes drip-feeds information that changes dramatically the audiences impressions of what has really been going-on.

The Director, Craig Baldwin, with his Designer, Hugh O'Connor, has created an ambiguous space - one that is comfortably carpeted and often warmly lit (Christopher page), but uncomfortably, ominously, surrounded by reflective black walls, that creep up the sides of the seating banks, in which we can see, spectral reflections of ourselves. Minimum furniture and a Sound Design accompanied by computer images that startle one into the modern ethos of the digital world, of the fast and irrevocable communication that is at hand, on our personal iPhone-computer, creates a sinister edge to all that is happening.

New modern ethical risks, differences of generational perception of responsibilies, patriarchy, misogyny, class, and social-economic disparities are all called into the debate of Mr Fritz's play - the underlying distressing truth that, ultimately, we are all sentenced to solitude in our own skins. That each of our fellow companions are unknowable and that we all have secrets and prejudices which sometimes cause us to step off into morally betraying actions - relatively, innocently, crossing our own personal boundaries of what is right, for short term gain.

Both, Mr Waters, and especially, Ms King give dramatically dynamic performances within the short, punchy demands of the writing. Mr Fritz does not give much time for us to identify his characters beyond generalised clues, and depends on the swift telling of events for the performers to deliver, crisply and succinctly, the 'function' of each character in each scene, resulting then, in, ultimately, a 'pointillist' portrait in the playing of the characters. I never felt the internal 'backstory' of Di or David,, the fragility of being just a human animal in the modern maze of life - the play begins with swift comic recognitions of relationships and only gradually reveals the possibility of a whole person in dilemma. It felt, technically, a trifle Brechtian in this distancing affect. 4 Minutes 12 Seconds: objective theatre, a moral fable, told in the mode of a modern 'horror story'. A compassionate identification was not much demanded from the audience by the writer rather, it was a cumulative objective recoil that one took away from Di and David and their son Jack and the inner 'hope', perhaps, that having been forewarned by this story I might leave the theatre forearmed, to look closely at my own circumstances - interesting.

Kate Cheel, as the victim of the play, Cara, is feisty and empathic, although, it is the acting, the characterisation by Felix Johnson, as Nick, in two short scenes as a friend of the two youngsters, that takes the actor's honours here. His detail and accurate hitting of the opportunities in the writing were very impressive. His appearance and physical characteristics accompanied by a lived life-history of mistaken identity and discrimination forced one to empathise with this socially handicapped individual. One came to wish him well in an unfair world.

4 Minutes 12 Seconds, is a contemporary play, that confronts us and our lives in a very absorbing way. The Production, under the guidance of Mr Baldwin, delivers a 90 minute experience worth catching.

P.S. Just to share: On the afternoon I attended the production, an audience member became ill, and the actors had to suspend the performance. Re-grouping after the medical interruption, the actors called for focus, the line place to recommence from the stage-manager, and after the lighting had re-established in the setting, the actors, Ms King and Mr Waters, took a brief time as we watched them 're-possess' themselves of their characters and began the story from where we had been interrupted.

A privilege to see.

Lo and behold, we were interrupted again as a locked out member of the audience, who had gone to the aid of the ill audience member, pummelled a door, insistently, to be re-admitted. The actors dropped out of their 'possession' once again to facilitate the 'request', and, afterwards, once again, called for the cue to re-begin and we watched once more the 'magic' of an actor at work. I write this only to appreciate, publicly, what an audience rarely sees, the craft and artistry of what an actor is doing to tell that story for their audience every time they perform. I was moved indeed by the skill of the performers and their complete professionalism and vulnerability as artists. One is in awe at what an actor has to demand of themselves to do what they do for us. In deed, Amazing.
Posted by Editor at 10:25 AM