Back to Bite You 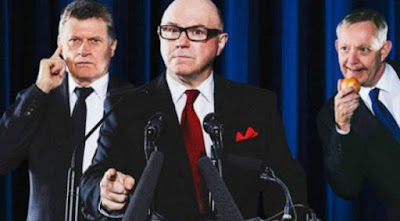 The annual Wharf Revue, this time with the banner title: BACK TO BITE YOU, from the inimitable usual team, Jonathan Biggins, Drew Forsythe and Phillip Scott with a guest artist, Katrina Ketallick opened last night at the Riverside Theatres out in Parramatta in its second tour stopover before arriving at the Wharf Theatre in Sydney, in late October.

Skills amazing, observational and verbal wit of an intelligent pun-filled, occasionally excoriating kind, with musical interludes using very famous music tunes (Little Shop of Horrors, My Fair Lady etc) with new (topical) lyrics are all on show. BACK TO BITE YOU, in its formula, is much like all of its predecessors over the past many years with the subject and treatment daring as comfortably middle-of-the-road, to please the pleasantly comatose who are used to their revue theatre to be enhanced in these modern times with a Glass(es) of Wine and not just a Cup of Tea and Bex! For, what isn't examined and lampooned from our cultural and political year by this team, this year, provides for a very interesting conversation afterwards. There is much controversy not even aluded too, with a preference for some relatively long look-back characters and set pieces substituting. One wonders why! And that, too, is an interesting conversation to have as well! You can, however, be assured of a chuckle filled night that won't have much to disturb the ire of many of its faithful audience or anyone in Canberra when it plays there in a couple of weeks. Little, to provoke one.

Mr Forsythe is in especially good form in all of his economic cartoon creations (e.g. Eric Abetz, Pauline Hanson, mostly everything he does) followed closely by Mr Biggins (an Abbot-like fan dance featuring glimpses of red budgie-smugglers!; a Donald Trump that is truly frightening as the text seems to be verbatim and not to need the satirist pen at all - being highlights) while Mr Scott accompanying on the Grand Piano strikes out some very astute lyrics (the Terrorist Song - hits a mark of a kind that I would like more of, I reckon.) Ms Retallick belts out her songs with great security, if she is not as adept with her comic creations.

There is some good Sound and Video design by David Bergman, on a formulaic Set Design by Barry Searle, that is brightened with some clever Costume Design by Scott Fisher and Nick Godlee. The Lighting Design by Matthew Marshall seemed to be still in a rough 'tour' look - not always 'covering' the action where and when necessary (- this is a Sydney Theatre Production,isn't it?!!!)

If you've never seen these extremely primed artists in this kind of work, it is worth thinking about (at least you can say that you have seen them), but, COME ON, those of you who have seen past shows know what you will get for your money and time.

P.S. There is a beautiful 'tribute' to Bob Ellis performed with great affection by Mr Forsythe.
Posted by Editor at 9:16 AM