Where Do Little Birds Go? 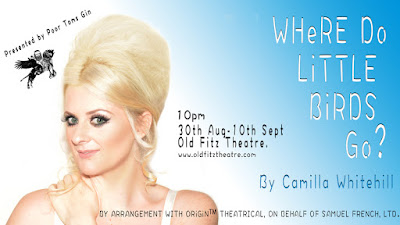 WHERE DO LITTLE BIRDS GO? is a short, one-act one-woman play by Camilla Whitehill. Written in 2015, it tells of the true story of a young woman who comes up to London from the country, gets a job in a pub - nightclub - that is frequented by the infamous, underworld killers, the Kray Twins , of the 1950's-60's, East/West End. (see MOJO by Jez Butterworth; or Tom Hardy's film, LEGEND.)

Our 'heroine' Lucy begins an innocent and perforce of economics, education and class, ends up a prostitute, who is kidnapped by the Kray twins to serve an escaped felon, Frank Mitchell, whilst he is in hiding from the 'coppers'. The play has a clean, clear unsentimental, uncluttered story construct of mounting 'horror' that is beautifully, charmingly told, impersonated, by Bishanyia Vincent. Lucy's dream was to be a singer/entertainer and constructed between some wistful singing (accompanied by Liam D Kemp) Ms Vincent avoids the melodrama of Lucy's predicament and high lights the simple-matter-of-fact acceptance of 'her lot' at that time in history (1966). The tragedy is all endowed by us.

It is presented on the Set design of John Osborne's, LOOK BACK IN ANGER (1956), and is a gentle antidote to the misogynistic bilge of that play. The historic time line is almost parallel. WHERE DO LITTLE BIRDS GO? tells of the cruelties that men did inflict on women of that time, by not judging them or her, but simply telling of the necessities, because of circumstance, of survival a person - a woman - must sometimes endure. Much like Alison and Helena endured in LOOK BACK IN ANGER, I guess. Still today, undoubtedly.

The experience is not proselytising nor is is it just an entertainment. It is a sympathetic piece of writing told naturally by Ms Vincent, gently Directed by Giles Gartrell-Mills. You know, dear readers, how much I abhor monologues, but this one woman show was a 'play' of some affect.
Posted by Kevin Jackson at 11:00 AM