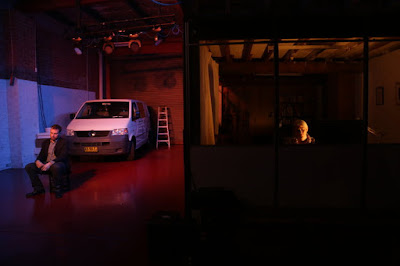 On a recent Saturday afternoon , after browsing for an hour or two in a bookshop, we were trudging through the wilds (wiles) of Newtown and then along Enmore Rd, deciding to have an ice cream and tea at the Turkish Hakiki Ice Cream Parlour, to then turn right into Wilford Street, past some groovy and hidden bars and graffiti walls and small cottages and then around another corner to Gladstone St, where one found a series of newish apartments facing the Old Flour Mill development, to finally come across a collection of old, smallish warehouse buildings, opposite the principal Sydney railway track, to find Alfie's Kitchen - only, usually, an eight minute or so  walk from Newtown Station. Out the front of Alfie's a canvas framed shelter housed a trestle table behind which sat three youths (in their twenties I estimate) - a gal and two guys - who cheerfully welcomed us, checked off our booking and then point us to some scattered chairs in the concrete driveway, where we met a young man called Constantine Costi (Con, to his friends), who cheerfully chats to us whilst we wait for some 17 orchestral musicians, a conductor, and six singers to get ready for a performance of Giacomo Puccini's one act opera IL TABARRO, inside the warehouse. One of my fellow audience, tells of his pre-performance journey into the space to find the bathroom, and of how friendly everyone was as they prepared and pointed him to his destination after a little chat - the hubbub of adrenalin charged energy and bonhomie and instrument tuning and dressing up. All of this in the back streets of Enmore at ten minutes to four on a Saturday afternoon! How amazing! How egalitarian are the arts. But then this is the bustling bohemian inner west at its best, perhaps!

IL TABARRO (the Cloak) is the first part of IL TRITTICO - three one act operas first performed at the Metropolitan Opera House in New York, in 1918. J. Walker McSpadden, in his1926 edition of Opera Synopses provides the following summary of the work:


This grim little opera has a Parisian setting, but the story of two men and one woman, ending with the murder of the lover by the husband, is entirely independent of background. The music is grimly passionate and remarkable for dramatic strength.

Noting Mr McSpadden's suggestion that the story is entirely independent of background, I supposed all these tragic events could happen, this very afternoon in one of the backyards, in the backstreets of Enmore, that I had just promenaded through, for real. The Director, Constantine Costi, has thought so, and adjusted the setting, costume and action of Puccini's opera to contemporary times.

Inside a warehouse space, with a gloss reddish/brown concrete floor, some raked seating of rudimentary chairs has been set out (maybe 40-50 seats). We take our seats and to our right is an enclosed one story office suite, that has the capacity to seat the orchestra above us on its roof (just how did they get that harp up there?, I wondered). The main 'stage' floor before us has a white delivery van, to which some of the characters load some meat during the action of our story.  Costume and Set Design by Isabella Andronos. Lighting Design by Nicholas Fry. What is remarkable about this production is that Mr Costi has found not only singers that can do 'justice' to this musical material but are physically, aesthetically realistically right-looking for the characters (although their ages have been lowered - instead of fifty-odd they appear to be in their thirties). Daniel Macey sang Michele, the husband; Geoffrey Knight, the lover, Luigi; Alex Sefton, the work mate and happily married, Talpa. His wife, Frugola, was sung by Jermaine Chou, whilst Blake Parham sang factory worker, Tinca. The tumultous wife/lover, heroine, of the piece was sung by Rebecca Claire Moret.

The acting performances Directed by Mr Costi were ultra-naturalistic and all the dramatic adjustments to this new period and location were entirely believable and seamlessly engaged. The singing was extremely impressive from all, with Mr Macey in the final part of the impassioned opera extremely moving. Ms Moret was extremely truthful in creating the 'melodramatic's' of the scenario -the 'internal' conflicts richly, subtly, explored. The sound balance in this intimate and pragmatically real space was remarkably achieved by the Conductor, Luke Spicer, guiding his orchestra with clean control. All elements were musically confidently prepared. The necessary musical sympathies were married to the dramatic necessities wonderfully. What is normally, on the operatic stage, sometimes described as Grand Guignol, in this carefully conceived production is a capture of the famed verismo style that Puccini is famed for.

Applause, congratulations, out into the afternoon daylight - it was only now a daylight saving 5pm - the crashing of the passing train, the sight and sound of an incoming plane for landing at Kingsford Smith, the jostling and early afternoon carousel of some customers - both men and women - coming from a 'hidden' bar in the graffiti covered wall spaces of the lane way, with the cooling spring wind of October, and, ultimately, the traffic rush of Enmore Road brought us back to the reality of our Saturday in 2016, slowly. The experience of an opera so lovingly prepared and performed, dealing with such passionate extremities of human behaviour, -the human/animal/bio-logical confusion between love and lust - had enveloped our imagination and feelings so fully that the adrenalin pleasure of the experience only gradually disappeared. We ate mussels and a cheese desert at a nearby Turkish restaurant before heading off to a performance of ANTIGONE - a "high-art" day out!

Mr Costi last year presented an eccentric, but also, wonderfully conceived, experiment in theatre last year called CANTERBURY TALES. Since, he has had an interlude of secondment with Barrie Kosky at his Berlin opera house and has worked with Opera Australia as a 'support' artist. I reckon he is someone to nurture and keep an eye on. This enterprising and successful production of IL TABARRO is a sign of an artist who has 'dreams' of ambition and the will to find the way to practise them. How else do you mount a production of a Puccini opera with a cast of six and an orchestra, counting the conductor of 18? Then again, as I mentioned his friends call Constantine: Con. He has the ability to beg, borrow and 'steal' - to con (perhaps) others to help create his dreams. It is exciting to declare that the result of all that, necessary 'conning', is definitively no con, for the experience of the production was more than highly pleasing - it was kind of suburban miracle. Opera in the backstreets of Enmore at 4 pm on a Saturday afternoon - who would have thunk?
Posted by Editor at 6:13 PM