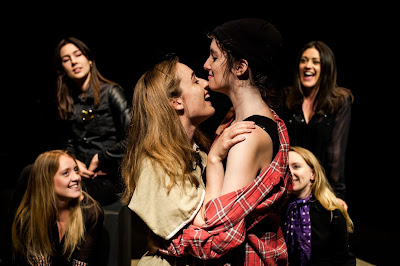 THRENODY, is the second work by Michael McStay that we have seen this year at the Old Fitz. The first having been: BRIGHT THOSE CLAWS THAT MAR THE FLESH.

In this work Virginia has been sequested all her life in the home (womb? - Ian McEwen's recent novel NUTSHELL!) of her mother, a writer. 'The Rider of the Diamond Horse', a cautionary tale, is their favourite work of hers. Virginia, a beige sad-sack of a girl, decides to venture out into the world, from her safe 'womb' to the 'City of Destruction', in search of her 'Rider', and through a series of modern day encounters - e.g. a bus ride, a drug-fuelled party and its aftermath - has a modern-day education.

Mr McStay has a distinctly 'religious', darkly spiritual influence in his work that seems to be investigating the ambivalence of God. For me, whilst watching, I was reminded of the questing Medieval play EVERYMAN, recently screened from the National Theatre of Great Britain, and of Christian's adventure in John Bunyan's 1678 work: THE PILGRIM'S PROGRESS From This World to That Which is to Come Under the Similitude of a Dream. Too, the 1967 film BEDAZZLED, an updating of the Faust story, by and with Peter Cook, Dudley Moore (remade, horribly, in 2000.) All of these, kept intruding on my live experience, for, I longed for a more contemporary insight or wit and less old-fashioned earnestness throughout this quasi-religious cautionary tale.

THRENODY is written as a poem (55 minutes) - the versification of Alexander Pope and the wit of his THE RAPE OF THE LOCK, came to mind, which made my experience of this work all the more disappointing. A chorus of six women: Josephine Starte, Lauren Richardson, Alex Malone, Georgia Wilde, Charlotte Devenport and Zoe Jensen deliver the text, with solo turns, and sometimes in unison, 'stepping-out' too, into characters (with props and costume, when necessary), as the 'adventure' demands of them. They are, mostly, fluent and well drilled but although they 'walk' and 'talk' the material with foreknowledge, they often forget to 'think' the thoughts for the text and merely end up reciting the text at high speed - one has to be extremely dextrous, as an audience (particularly between 9.30pm and 10.30pm), to keep up and comprehend what is going on. There is both drama and some contemporary satire going-on, I think! However, as you can read, I was more often imaginatively elsewhere (and pining for that elsewhere), easily distracted, than I was present in the Old Fitz Theatre, no matter how I tried.

It is encouraging to have an ambitious young playwright investigating these ideas and daring to write in verse but might I suggest, as I intimated at the last writing show of Mr McStay's, that he approach a Director - an out-of-the-fan-club head - to take charge of the production from the page to the stage, for at the moment both the skills of this artist - the Writer and the Director - need more room to develop without that double-pressure of audience dead-line. At the moment neither the writer nor the Director seem to benefit developmentally from the physical out-puttings. There is to be another in April, we are advised.

Dictionary: THRENODY - a song of lamentation especially for the dead; a dirge or funeral song. Hmmm! Those ominous tolling church bells in the Sound Design, overdone in their cuing, certainly had us grasp that idea if naught else.
Posted by Kevin Jackson at 7:29 PM