Who Speaks for Me? 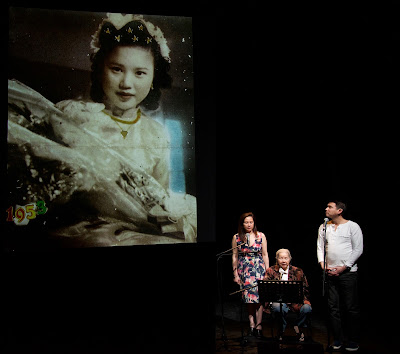 National Theatre of Parramatta and Performance 4a present, WHO SPEAKS FOR ME? devised from community memories by Annette Shun Wah and William Yang. 12 Oct - 15 Oct.

WHO SPEAKS FOR ME? is a theatre production that has been Devised and Directed by Annette Shun Wah and William Yang.

Three families now living in Australia having come relatively, recently from three different countries and cultures, tell multi-generational experiences of their origin and of the families' assimilation into this new country which has now become their home.

Simply standing in the spotlight, in front of standing microphones, at the side of a large screen where photographs recollecting their life journey  are projected, these three families: one from Bhutan - Ly Heang Seang, Vanna Seang; one from Vietnam - Ba Quoc Viet, Sophie To, William Uy Vule; and the last from Cambodia - Puspa Lal Acharya, Chandra Acharya, tell us, from a prepared (and edited) script with a straight forward simplicity and extraordinary vulnerability, which is often very moving, sometimes comic, too, of their histories. There is no manipulation of emotions going on in this performance, just the exposure of naked truths.

This is verbatim theatre delivered by the actual people, not actors, and like the recent Powerhouse Youth Theatre (PYT) productions: JUMP FIRST, ASK LATER and, particularly, TRIBUNAL, it creates a piercingly revelatory affect to hear such remarkable stories of survival, in both their original country, and then in Australia - their refuge. By being able to put an individual human body and face, just like one's own, to the often 'horrendous' circumstances of these people's lives, an overwhelming sense of wonder suffuses one, and self-reflection arises: 'Could I have maintained my faith, hope and dignity to achieve, against great odds, what these people have achieved?'  For them it seems to be just something that they have done. For the audience, for me, it is realising that what could be 'read' as an impossible and exaggerated fiction, especially, if it were told as a play, or as a film, - my cynicism, ever-present! - is neither impossible nor an exaggeration, for truth is stranger than fiction. WHO SPEAKS FOR ME? is evidence of that 'wonder'.

Congratulations to these performers: grandparents, parents and their grown-up children - their courage, not only because of their story, but by being willing to present this story to us, live, is an inspiration. Thanks to Annette Shun Wah and William Yang and Performance 4a, and, at last from the National Theatre of Parramatta, for a production that in its content and level of professional presentation creates an almost 90 minute experience in the theatre that seemed to be of no temporal length at all - it was delicately spellbinding, absorbing, illuminating.

One hopes this production has the opportunity to be seen elsewhere.
Posted by Editor at 2:22 PM