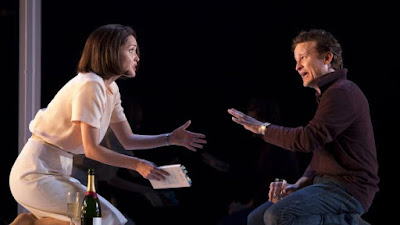 SPEED - THE - PLOW, by David Mamet was written in 1988 and starred Madonna in its first outing.

Act One: It concerns two lowly-runged 'goers' in the Hollywood hierarchy trying to get further up the ladder with the power to 'green light' the production of films. Charlie Fox (Lachy Hulme) brings to his ambitious friend/ally, the corporation favoured Bobby Gould (Damon Herriman), a deal for a Prison film with hot action man, Dougie Brown, attached. This Prison film might be the one, the project that will propel them into a higher place of regard and influence. Pitch it they will to one of the Top Guys. Whilst talking, Karen (Rose Byrne) a temporary secretary, brings in the coffee. When she leaves a bet evolves between the two excited men, for $500, whether Bobby can get Karen to bed! After Charlie leaves, Bobby goes into action, asking Karen to read a book about Radiation, called THE BRIDGE, and to give him a report as to whether there is a possible film in the subject matter, that evening, at his home! She agrees!!

Act Two: Later that evening at Bobby's place, Karen, with book-marked novel, sprawls on the carpet, drinking 'bubbly', and begins to persuade Bobby that there is important film potential in the book and he should green light it. They talk, they crawl and sprawl on the carpet, they drink more 'bubbly'.

Act Three: Next day Bobby tells Charlie that he wants to do 'good' and announces a change of mind and that he will drop the Prison film and champion the Radiation film. Charlie is aghast. Charlie questions Karen and she admits that, yes, indeed Bobby and she had gone to bed. That she had sex as a bargaining tool for her ambition. Bobby is bewildered. Shocked. Apparently, out-manoeuvred by a woman!!  The book is thrown out the door. Karen is exiled into the wilderness, through the same door. Charlie is victorious, The Prison film will be pitched. Although, he will be light of $500, after all Bobby did score Karen. A bet is a bet - business, a buck is a buck.

Says Mr Mamet in an article for The New York Times, DRAMA THAT BRINGS HOME THE BACON: '


I wrote [SPEED - THE - PLOW] some 20 years ago, when I knew little of Hollywood. I lived in the East and would go out there three times a year for a day or two, and sit in Hollywood with some director or producer or studio head, and talk about some project we would not make, and the thing was pretty clear: the movies were an industry, staffed by craven business types interested in only making a buck. ... But what about High Art?  ... I believe that the business of America is business, and the aim of drama is to put tushies in the seats; and the best way to do that is to write a ripping yarn, with a bunch of sex, some nifty plot twists and a lot of snappy dialogue. If you are looking for such, I suggest SPEED - THE - PLOW.

This is a ninety-minute three-act chamber piece with the signature ingredients of the Mamet play - 'a ripping yarn, a bunch of sex, some plot twists and a lot of snappy dialogue' in the mode of what has become known as 'Mamet-speak'. And business is business. Cast a celebrity/actress in the role, Madonna, and business will be even better. So they thought in 1988.

The choice of this play by the Sydney Theatre Company (STC), then, must have some merit in their belief that the text has all the hallmarks of a typical Mamet play and, so, worth producing. And the casting of a celebrity/actress, in this case, Rose Byrne, following the lead of the original production with  'the aim of drama [being] to put tushies in the seats' will make business - good business.

I have alway regarded SPEED - THE - PLOW as minor Mamet.  I would go so far as to say, second-tier Mamet. And, almost 30 years after its first production I would also say dated Mamet - a satirical cartoon, of its time, that has lost much of its punch today. Too much has gone on in the world, especially of late, to believe that there is any zeitgeist frisson going on here with this Hollywood fable of male misbehaviour - mendacity - to make it a must see for Sydney audiences, in 2016.

Why has this play been even considered for production by the Sydney Theatre Company (STC) in 2016? If it is as a star vehicle for guest artist, Rose Byrne, who plays Karen in this production - and she acquits herself well enough - who has been front-and-centre in all the publicity, it does not offer her much opportunity to be seen - tested - to star. Does the audience get their money's worth, in this opportunity to watch Ms Byrne?  Undoubtedly, the role of Karen is the catalyst to the dilemma of Bobby and his mate Charlie in the play but Karen's stage time is fairly sparse, limited and  is of secondary importance to that of the men in the action of the play.

Mr Uptown's debut production for the STC - was it 2008? - was the one-act REUNION (1976) by David Mamet, and there is, I propose, some reflection of the Mamet model of character - both male and female - and language efforts in Mr Upton's one and only original play for the STC, RIFLEMIND (2007), which I re-read recently, to believe Mamet to be a special inspiration. So it could be called 'neat' for Mr Upton to finish his Artistic Directorship at the STC with a Mamet as he had begun with one - a circle complete. David Mamet does not, generally, have a record of interest for female characters in his plays and if Mamet was the chosen playwright, because of Mr Upton's predilection, appreciation, for the writer:  SPEED - THE - PLOW has been "a favourite modern play for me and many writers ... a fabulous bit of writing" says Mr Upton in the program note, it seems a biased/odd choice when considering it as a vehicle to showcase Ms Byrne. It does not really give ample opportunity for the showcasing of Ms Byrne. Surely, Mamet's OLEANNA (1992) - seen at the STC with Geoffrey Rush and Cate Blanchett - or, the BOSTON MARRIAGE (1999), with three interesting female characters - a difficult play, never seen in Sydney in a major production - would have justified the hype/selling point about the publicity of seeing Ms Byrne. Carol, in OLEANNA would have been a worthy challenge for Ms Byrne and we would have seen more of her onstage, and any of the roles in BOSTON MARRIAGE would have provided a better exposure. A pity then that it is only Karen that we get to see her 'wrestling' with. Some audience may feel cheated.

Mr Herriman, is the actor in this company with a terrific track history (experience) in the theatre, and he acquits himself in the central role with some pluck, the early verbal sparring and Mamet music pinging well. Mr Hulme has the physical size - hulk -  to impersonate a bullying Hollywood hack convincingly, and comes into some power in the last haranguing episode of the third Act - at least with noise and physical presence if not much nuance of language (the fight sequence lacked conviction). And, as earlier mentioned, Ms Byrne, with not much theatre experience, creates a delicate and cinematic detail and presence on this stage that has some of the hallmarks of her ironic and subversive wit and intelligence, that we have relished in films such as BRIDESMAIDS, SPY and the BAD NEIGHBOURS series.

David Fleischer, Designer, given the difficult task of creating two sets for this chamber play in the relative vacuum of the Roslyn Packer stage is economical in his visual tropes, though the principal problem that he creates for the production for Mr Upton is the length of dead stage time he makes in his architectural solution to the play, with scene changes in the darkened auditorium that are immensely long. The production suffers from the lack of the gathering momentum of the satiric efforts of the writing that requires sustained energy to keep it afloat -to help it rise to a soufflé-like climax of comedy. To accommodate this Design  the actors are required to rewind the energy of the writing after each act-break instead of cresting on what has gone before. It becomes a kind of Sisyphean task for the actors and is no asset to the audience's continued involvement. This management, balancing, of Mr Fleschier's visual flair with the dramaturgical needs of the writing was a flaw with other work of his that we have seen in other collaborations he has had with Mr Upton: e.g. FURY, TRAVELLING NORTH, for instance. Mr Fleischer's offer/solution, with Mr Upton was, relatively, deadly to this production's efforts.

SPEED - THE - PLOW seems to be lost in the BIG space of the Roslyn Packer Theatre and would have been better suited in a smaller venue, and may have avoided some of the critical scrutiny the production and play have received. But then it would not have had the potential of reaping good business with all those 'tushies' in the seats, making the buck that Mamet talks about above. I don't believe any of the artists involved with this production benefit from the pragmatics of the choice of this theatre to play in. I don't believe the audience benefit from this choice of the business management of the STC, either.

Art or Business? Business or Art? Which rules? Charlie or Karen? Karen or Charlie?