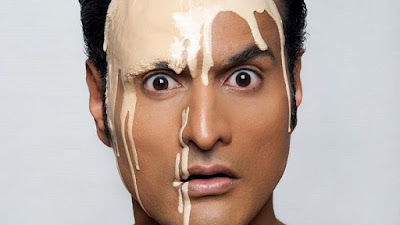 LIGHTEN UP, is a new Australian work from actor/writer Nicholas Brown and Stand/up comedian/writer Sam McCool. It is their first play/work as writers.

The origin of this play seems to have been a personal one for Mr Brown who after graduating from acting school (NIDA - 2000) found that the industry that he was trying to work in was practising, subtly, 'systemic racism'. So, as far back as 2005, he began to write this work trying to put his experience into some kind of public perspective. It began as a film idea but has gradually transmogrified into a play. What he found while writing, amongst other things, was a therapeutic watershed for himself that "helped [him] to embrace his mixed-race heritage": that of an Australian Indian heritage (he later went to India to play some lead roles in the Indian/Bollywood films SEDITION, PRATICHHAYA, LOVE YOU TO DEATH and KITES.)

From Mr Brown's notes in the program:


I decided to to make my story about an Anglo-Indian man with major identity issues falling in love with an Indigenous Australian woman who helps him come to terms with his skin colour. In 2012 after several years and many incarnations I approached comedian Sam McCool to co-write the story with me (he, too, is of Australian Indian heritage) as I knew the play's themes were heavy and that the only way to address that touchy subject was through comedy. LIGHTEN UP became a cross cultural comedy ...

Mr McCool in his notes writes:


In writing LIGHTEN UP, our focus was always telling an original 'Aussie' story, set amongst the multicultural suburban landscape both Nick and I were raised in, yet one which tackles head-on the complex issues of racism, prejudice, identity, career, ambitions, life, the after-life and destiny. .... The story is essentially a romantic comedy, impacted by the clash of cultures surrounding each character. It highlights the challenges for individuals trying to discover their sense of purpose and true identity in our modern culturally complex world, beyond what we were brought up to believe.

LIGHTEN UP, as it is on the SBW stage, is all of those things. I found the work engaging and funny despite the feeling that the performances were still, mostly 'works-in-progress', as is the text itself - some first night line 'fluffing' going on, suggesting recent re-writng uncertainties revealing themselves. The script has the structural foibles of a screenplay - a need for lots of actors - requiring three actors having to play not only a principal role but a scatter-gun of others. Bishanyia Vincent plays not only Janelle, the Aussie girlfriend, but some seven other characters. Ms Vincent manages to create a comic character of some note as Janelle but also convinces with astute choice of cliche gesture other identities to keep the play robustly flowing (I suspect with the scrutiny of Magda Szubanski's repertoire). I reckon the costume changes going on for these actors are worth noting as part of the intricate difficulties of the production. Julie Goss, has a triptych of characters, making the most of the Merle Oberon with exotic élan. Too, Mr McCool, besides his Indian film director, Anil, larks his way with four other characterisations, as best he can.

The genre is that of a romantic farce played at break-neck speed stacked with comic characters and cliches and jokes of a Marx Brothers/Monty Python type and rapidity, with a meaningful political undertow. The actors coping with 'heroic' costume changes and with the short swift structure of sketch-length scenes have not yet got it all under control in this space. Volume, pitch and the right pacing of the vocal demands still not completely harnessed for the best result. It is, as they say, all in the timing, especially with this kind of writing. Although, how far they will be able to solve this problem is in question in a Design space by Tobhiyah Stone Feller, that is all brick wall and wooden floor (no absorbent soft surfaces), that creates a reflective sound echo chamber that does not assist the clarity of all that is said - I did, however, like the cheekiness of the Design colour palette. Perhaps, as the company finds its rhythm and begins to land their jokes on the audience and are able to listen to their response, before moving on, it will reveal all the work's kinetic possibilities - which I believe are significant.

The contrast of sophistication of the comic writing and the balance between the comic and heart felt truths in LIGHTEN UP seem much more developed, more assuredly handled here, than in the Griffin prize wining play THE TURQUOISE ELEPHANT, which we last saw on the SBW stage. One wonders if the Griffin main stage management ever thought that this work was worthy of main stage care, rather than leaving it to an Independent company to bring it to life. For, it seems to be more astute in its comic political genre writing than THE TURQUOISE ELEPHANT, which supposedly had a concern about Climate Change - I wonder what Ms Edwards would have made of this text after watching her valiant attempt to find the way for Mr Carleton's play.

Mr Brown playing the role he wrote for himself, John Green, acquits himself well. While Katie Beckett, as Sandy, has a personable charm, she appears to be slightly out of her depth here, unsure as to when it is and where she is, in its playing stylistics. Vivienne Garrett, as Bronwyn, the mother figure, who is denying her heritage (her colour), has to find a balance to a character that could become the 'villain' of the piece. This, she mostly (nearly) manages - a scene to explicate her back story, earlier, would assist the problem, I reckon - dramaturg take note. Sam McCool, the other writer, has wit and energy in the many incarnations he has responsibility for, but it is that of a stand-up comedian rather than that of an actor - he has the disquietening habit, whilst in the mid-flow of his scene, to 'checking' the audience out, out of character. Perhaps, it is just inexperience and the habit of the stand-up comedian?

Shane Anthony is the Director and one hopes he continues to settle the production down as he hears the audience respond to the work and guides it to a clearer, landed experience. Mr Anthony has acted as Dramaturg to this development but has not found the attendant disciplines for staging this incredibly clever but difficult work. Comedy is hard but farce as we have seen in Sydney in this past month - A FLEA IN HER EAR, RELATIVELY SPEAKING, is even harder. It requires expertness in technique (solved with stricter casting) and lots and lots of TIME to get it right.

It is the way the 'politics' of the work is handled by Mr Brown and McCool in the torrent of the farcical comic elements that makes this play worth championing. Even if it is naive it has a pungency in it's revealing. It is not angry, it is human. This work has the passion of authenticity that reflects the lived experience of both these writers' lives - their Australian Indian experience. That they still have a sense of humour about it all is why the work is especially arresting. It has a cultural generosity. It is a look at other Australians' lives through a lens that is refreshing and necessary. It has a similar mixture of the recent Australian romantic comedy film, unINDIAN. There is 'something' in the air, perhaps. A maturing of an industry?!!!

John: Mum, please tell the truth. Where are we from?

Bronwyn: I wasn't born in England, John. Neither was your father. I came here in the seventies. From Bombay.

Bronwyn: I'll always remember it as Bombay. Your father and I are ... Anglo-Indian. Just like Englebert Humperdinck, Cliff Richards, Merle Oberon.

Bronwyn: When I arrived here, I had a funny accent and people made fun of me. I met your father. He'd experienced the same sort of thing. We wanted to assimilate. We both had white skin. Especially your father, and we decided to ... to move on. My mother told me when I was growing up that she was British and her mother did and her mother did too, even though we were all born in India. Same with your father's family. We're a mixture. Once India got back its independence from the British, we struggled. We were all messed up for being mixed up. Colonialism has a lot to answer for.


LIGHTEN UP, has the potential to develop into a work of much accomplishment. The Sydney Theatre Company (STC) has picked up the Griffin production of Angus Cerini's THE BLEEDING TREE, for the coming year of plays. It is an accomplished work, both the writing and the production. The STC have bought in a full proven package. One wonders if they would take LIGHTEN UP on and develop it further - I think they should. Someone should. In the meantime give it a look, for even with all of its rough edges it is a better night in the theatre than other stuff that is vying for your time and money.
Posted by Editor at 3:39 PM