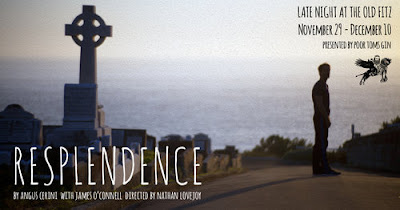 All you theatre goers in Sydney should respond to the name of this writer Angus Cerini, for it was he who wrote the terrifyingly wonderful THE BLEEDING TREE up at the SBW Theatre for the Griffin Company, in 2015, which has been curated by The Sydney Theatre Company (STC) as part of their season next year.

Written in verse this is a one person monologue of a very Melbournian angst - the play was first presented as part of the Melbourne Theatre Company's (MTC) NEON Festival in 2014 - it is a kind of "Night in the Life of a Loser" and won the Louis Esson Prize, in the Victorian Premier's Literary Awards.

No room for wondering who or what you might be.
Just one never ending, ceaseless bending of time that nevertheless sways.

And that my small friend sitting here amongst the voices from the grave is where the sermon has to end.'

This production is Directed by Nathan Lovejoy (he has also prepared the Sound Design), with actor James O'Connell. The production features the Actor and the Director at the expense of the clarity of the text. There is much sound and fury (emotional and physical demonstration) going on here, from Mr O'Connell and lots of Lighting and Sound, too, courtesy of Mr Lovejoy, and unfortunately, it is at the expense of the writer who is definitely no idiot telling this tale. After reading the text I believe Mr Cerini is as sure here in his writing as he was with the prize winning THE BLEEDING TREE.

In any performance the text should be at the centre, the primary objective of the communication. In this production it has the tertiary position. Actor is in primary position. Director, with his Lighting and Sound plot, secondary.

There is a devoted energy being given on this stage by these artists. But RESPLENDENCE is a much better play than this production permits us to share.
Posted by Editor at 8:34 AM