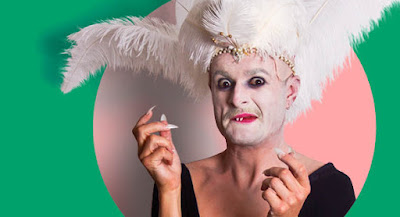 Griffin Independent with Virginia Hyam present NOSFERATUTU or Bleeding at the Ballet, by Tommy Bradson, at the SBW Stables Theatre, Kings Cross. 7-21 January.

NOSFERATUTU, or Bleeding at the Ballet, is a new work by Tommy Bradson, Directed by Sheridan Harbridge. This is a showcase piece written by Mr Bradson for Mr Bradson. It is a quasi comic piece with some songs supported by a live band/orchestra led by talented Steven Kreamer on keyboards- (Sally Schnickel-Brown, Cello; Olga Solar, Violin). Ms Harbridge and Brandyn Kaczmarczyk feature in two supporting roles.

This concerns a Creature, Kevin, who has for four hundred odd years craved to be a dancer. (I think that is what is happening. I'm not quite sure!) But his papa told him: "Kevin, dancing is for girls." At an attempted solo performance of Swan Lake an 'unspeakable' act is perpetrated on the Dancer and we the audience are then regaled with the ravings of Kevin and of his history, of his frustrated cravings. The text is full of imagery using a baroque vocabulary that is more often than not undercut with a vernacular vulgarism. It achieves some laughter early on in the show, but becomes, gradually, tiresome in its repetition of form. There are some very funny hi-jinks from all the players but the material wearies itself as it does not have a clear enough through-line of narrative for the audience to fully stay the running time - 75 minutes. One expected some satire, some statement about the world, perhaps, or, if not that, a more sophisticated piece of narrative/character writing. But this thinness of 'frou-frou' was all  that was to be on offer. The fire works of the comedy is not enough to keep one in a state of belief, I'm afraid - some story, even SOME content, would help.

The look of the show has been well prepared: Designer, Ashisha Cunningham; Lighting by the dependable Alexander Berlage. The performances are full-throated. Mr Bradson is impressive - just too much of him - edit; Ms Harbridge, with her remarkable comic truthfulness, both verbally and physically, blessed with a singing voice of some breathtaking range, steals the show every moment she is given opportunity - her technique, and skills are dazzling - give her more to do, I reckon; and Mr Kaczmarczyk gives a 'ballet' turn that makes his early demise a shame.  Loved the orchestra. The package looks trademark Sydney (THE TURQUOISE ELEPHANT).  It has the glamour of visual pleasure, and the writing has the cheap vulgarity of comic indulgence but lacks content of any meaningful kind. I mean using the popular meme of the 'Undead' needs more than just being 'Undead' nowadays, doesn't it? The fashionable 'Undead' imagery/metaphor  has run its gauntlet, has it not? We all have OD'd over THE WALKING DEAD and those arty French TV compendiums, haven't we? Certainly, in this NOSFERATUTU, the 'Undead' are not covering any new ground to keep us attentive.

The audience I saw it with applauded well. So, off you go if you have the time. One hopes that this is only the first of some production developments for there is much talent in this show - it just isn't astute enough, yet. Yet. A trifle too self-indulgent.
Posted by Editor at 9:22 PM