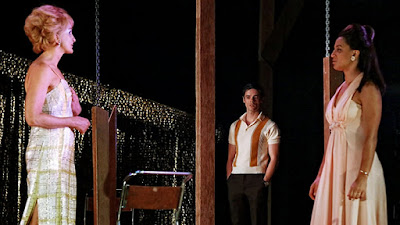 Michael Gow's AWAY is a 'classic' Australian play much loved by Australian audiences. I have seen some countless numbers of productions and, I believe, this is the fifth professional production that I have seen. I saw the first production for the Griffin Theatre Company at the SBW Stables Theatre in 1986, Directed by Peter Kingston. One for the Playbox Theatre in Melbourne in 1986, Directed by Neil Armfield. One by Richard Wherrett for the Sydney Theatre Company (STC), in 1987. Last year, 2016, in Sydney, from the Sport For Jove company, Directed by Damian Ryan, at the Seymour Centre.

Personally, I have always held AWAY, Ray Lawler's THE SUMMER OF THE SEVENTEENTH DOLL and Peter Kenna's A HARD GOD, as my favourite (nostalgic) Australian plays. AWAY, always resonating with my own Christmas holidays in Yamba, on the North coast of New South Wales, and a memory of my own mum, a surviving depression 'baby' partially recalled in Mr Gow's character of Gwen. And, as well, my own brush with the 'Nasho' Drafting lottery for Vietnam service - my number was chosen (and after medical inspection was rejected). The play and all productions have always been a critical cathartic recollection of events in my own life.

Matthew Lutton's present production in the Drama Theatre is a production of our times, for our time - a Trump/Le Penn/Brexit/Hanson-Abbott/North Korea/Putin time. One of dramatic uncertainty, not one of nostalgic 'romanticism'. The production of the play has been pitched in playing style in a kind of 'hysteric' dynamic with the characters reacting aggressively, unconsciously, to a social environment that is disorientating and bewildering. As true, possibly, in 1960's Australia, the setting of the play, as in the origin date of the play, the 1980's.

The Sound Design by J. David Franzke, for instance, is a mixture of the familiar: the Mendelssohn, A Midsummer Night's Dream, natural sounds of water, wind and birds (soothing), and of telephone, crowds and eerie jangling sounds that sit around the auditorium just below a clear perception identity. The latter sounds creating a subtle sense of unease throughout the performance. The familiar tunes of the dance music slightly 'pushed' in style and volume to challenge us, even though we recognise them: comforting and yet with David Lynch type-fracturing. Further, the actors seem to have their voices 'boosted' with electronic aids - unnaturally resonating, not quite human in tonal quality.

The Set and Costume Design, by Dale Ferguson: the first act, a brown-wooden-columned-shadowed space that accommodates a 'school' production of Shakespeare's A MIDSUMMER NIGHT'S DREAM to be inhabited by 'translated' figures with animal heads from the magic world of the fairy kingdom in frenzied dance, with a series of more abstracted, light contained (Paul Jackson) spare domestic spaces featuring a portable central cupboard (almost like the magic one of Narnia fame), becoming a near never ending source of costume for the journey away, which, ultimately, light-wise expands into the Gold Coast Hotel, gold curtained restaurant, where celebrations of a New Year, once again danced in ominous but familiar choreography (Choreographer, Stephanie Lake) seems to almost conjure a catastrophic tempest of storm, that converts the whole to a glaring white space with a huge back wall leaning ominously over all, featuring a single central, but normal sized doorway looming as the only exit - it is the exit that Tom finally "unburden'd crawl(s) to death" - the doorway representing the mythic door/gate to the other world - like the gate in the wilderness I recall from philosopher/film Director Terrence Mallick's THE TREE OF LIFE, where the spirits of the afterlife, on its other side, wander along the beaches beside the collective unconsciousness of the ocean/sea.

Into this sight and sound environment the emotions of all the characters, in Mr Lutton's production, take on an edge of blasted distemper, whether in reactive struggle or a kind of emotional despair. Gwen (a magnificent Heather Mitchell) in her famous scenes appears brittle to almost fracturing fragility; the usual semi-comic seduction, mutual masturbation scene between Tom (a beautifully calibrated performance from Liam Nunan) and Meg (Naomi Rukavina) takes on a threatening colour of violence/rape, recalling, for me, the BLACKROCK (1995) scenario mood of Nick Enright's beach play. The plight of the men of the play: Jim (Marco Chiappi), Roy (Glenn Hazeldine) and Harry (Wadhi Dona) highlighting the wary and weary, who struggle to hold onto normalities for solution to family travails, in an unravelling world, both personal and natural.

Tom the dying child/teenaged-poet acts, in this production, as a conjuror and observer of the play, recording/writing a witness to his last times on earth for us - he, leaving us to ponder how do we go on to live in these uncertain times, with the last scene, ominously, having school children/relative innocents - our futures - engaged in the great and disturbing conflagration of the world of Shakespeare's storm wracked KING LEAR. There is no interval, the experience of the play leaves no room for our exit - we must endure till the final 'curtain'.

All of the company have taken on the demands of Mr Lutton and bring a new perspective to the qualities of Mr Gow's play. That the play in all of the permutations that I have seen, can also expand into this dark contemporary re-visioning, with such ease of elasticity, convinces me further of the Classic qualities of Mr Gow's writing. Mr Lutton's production and his eight actors: Marco Chiappi, Julia Davis, Wadih Dona, Glenn Hazeldine, Natasha Herbert, Heather Mitchell, Lian Nunan and Naomi Rukavina rise to an exciting night in contemporary theatre with a thirty-one year old play. The women of the company bringing a focus of primacy beside the coaxing of Mr Nunan, especially.

This AWAY, is not to be missed.

It is interesting, for me, in watching Mr Lutton's use and conjuring of Shakespeare's A MIDSUMMER NIGHT'S DREAM, to recall Kip Williams' ambitions in his recent production, it being better realised, here, in AWAY, than in Mr Williams' uneven production of the Shakespeare play, last year.

P.S Just to follow up on my observations of the STC employment of Sydney actors that I mentioned in my blog on THE TESTAMENT OF MARY, At present the STC have nine actors on stage: four of them from Sydney -  five from Melbourne, this being a co-production with Melbourne's Malthouse Theatre. I noted that at The Old Fitz, THE JUDAS KISS, an Independent Theatre Production, has seven actors on stage from Sydney, three more than the STC. They are unpaid.
Posted by Editor at 9:59 PM