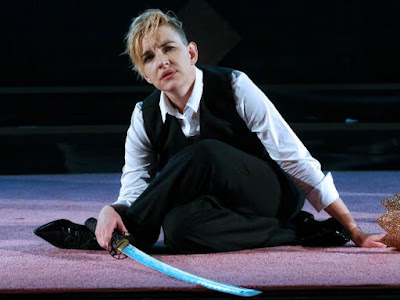 RICHARD III is a play written by William Shakespeare c. 1592, early in his career. The Bell Shakespeare present at the Sydney Opera House RICHARD 3,  a dramaturgical collaboration between Director, Peter Evans and actor Kate Mulvany using the Shakespeare original. The play has been hand-crafted with this actor and company in mind, it seems. This is their third collaboration, JULIUS CAESAR and MACBETH, being the previous two.

Kate Mulvany is also playing this Richard 3, and in this version's adaptation, Richard is centre stage, to such extent that at this production's end, it has been contrived that Richard, dead, after the sword duel  with the victorious Richmond on Bosworth Field (in this production using what look like Japanese swords - Movement and Fight Director, Nigel Poulton), reappears, crosslegged on the floor of the stage, and instead of the original ending where Shakespeare's Richmond, soon to be Henry VII, unites the Red and White rose for England's peace, we are given to an explanatory speech, taken from Shakespeare's Henry VI - Third Part, where this Richard 3 seems to want to justify his villainous career as a revenge for the disabled body he had been 'birthed' with:


I that have neither pity, love, nor fear.
Indeed, 'tis true that Henry told me of;
For I have often heard my mother say
I came into this world with my legs forward:
Had I not reason, think ye, to make haste,
And seek their ruin that usurp'd our right:
The midwife wonder'd; and the women cried,
O, Jesus bless us, he is born with teeth!
And so I was, which plainly signified
That I should snarl, and bite, and play the dog.
Then, since the heavens shaped my body so,
Let hell make crook'd my mind to answer it.
I have no brother, I am like no brother;
and this word love, which greybeards call divine,
Be resident in men like one another,
And not in me: I am myself alone.

In this Bell Shakespeare, Richard 3, appeals, in an epilogue, taken from another play, for empathetic understanding this Richard 3's 'crimes': "That all my witnessed behaviour has been a revenge from a bullied, disabled individual": "Then, since the heavens shaped my body so, Let hell make crook'd my mind to answer it." A conceit that is appalling in its baldness, but as it is made by one of Sydney's 'darling' actors (in a proper sense), it could be a final winning gesture of persuasion, for some to consider it.

This actor/adaptor, Kate Mulvany, like Shakespeare's Richard III, a great actor/manipulator, winsomely, coaxes us to her Richard's justification - indeed, she is a consummate player who can slip into any role with ease - and so, may have persuaded some of us to empathise with this infamous character. Indeed, on opening night there was a standing ovation at the conclusion of this speech (and the play). Wickedly, I asked later, "Was it for Ms Mulvany, or this Richard 3's appeal of understanding?" We do live in such a P.C. (and post-modern) world these days!

Ms Mulvany seems to be inspired by the opportunity given her to play Richard, Duke of Gloster (Gloucester), and gives a performance of some great arrest. The intellectual acuity of her textual reading, the startling vocal ownership of every word, the careful and utterly convincing physical choices are all impelled by a fierce and totally committed energy force that demands attention and keeps it. She often has her Richard directly communicate knowingly, wittily, with us, making us a kind of enabler through all and every convolution of the merciless ambition of this Duke of Gloster. It is a gripping performance.

There is no game of gender politics evident in this casting, it is, simply, the casting of an actor in a role. And Ms Mulvany relishes and justifies that decision. There is no male impersonation going on here, it is the expert possession of character. Great acting is a kind of permission of 'possession' by the actor to the invention of the writer. Ms Mulvany believes she is Richard (has inhaled him into every sinew) and the performance is absolutely invested with that belief. And it is here with the contrast between her startling work, as Richard, and the other performer's work lies a problem for the production.

Similarly to my many experiences of Michael Gow's AWAY, I have seen many Richard, Duke of Gloster's, so as to have a bench mark of expectation around this role. On stage: Antony Sher, John Bell (twice), and one of the most thrilling, Thomas Campbell in Kate Gaul's version in 2009, Ewan Leslie in the exciting 2010 Melbourne Theatre Company's production and Mark Rylance in the Globe production in the London West End (coupled with his remarkable TWELFTH NIGHT). Then, of course there are film versions of which Laurence Olivier's dominate one's memory. Ms Mulvany's performance sits in the same Ring of Respect that they all do.

The problem for Bell Shakespeare is that one needs an ensemble of actors that can match the powerhouse of the leading character. Ms Mulvany cannot carry this play by herself. Not any of her co-hort can match her energy, clarity, and brilliance, consistently. Not one of them offer Ms Mulvany's Richard with any stakes of opposition. For instance, James Evans' Buckingham has the intelligence of the text, can speak the verse well enough, but has no inner life or any energy to countermand the passionate offers of this Richard 3. The final interlude between these two criminals, Richard and Buckingham, is a dull exchange enlivened by only one of the participants. In the moments when Ms Mulvany is not in the thick of the action onstage the production falls into relative sloughs of inert dullness and, often, incomprehensibly.

The Direction, by Peter Evans, has collaborated with Designer, Anna Cordingley, and Lighting Designer, Benjamin Cisterne, to create a glamorous nightclub - a rich person's home bar? - equipped with a 'dumb-waiter' and a kind-of surveillance video screen, with the other nine actors sitting permanently around the Set, in costume of some wealthy finery, across eras of fashion, seeming to be involved in an evening entertainment of role-playing a Shakespearean play, as Mr Evans tells us in his reported program conversation as "a kind of party or convention". It is as if the characters of DOWNTON ABBEY are having an indulgent night of horseplay - my kingdom for a horse, indeed. Or, is it a fanciful exercise of a new BBC episode of THE CROWN, to explain some of the other history of the 'family' with Handel's 1727 Coronation composition ZARDOK THE PRIEST, (Composition, Steve Toulmin; Sound Design, Michael Toisuta), 'house-music-uped' and original, escorting us into the lugubrious presence of this House of York?

All the players are virtually on stage the whole of the performance and has their characters, hovering and haunting the space with their presence. The men: Gareth Reeves, Ivan Donato, James Lugton, James Evans, Kevin MacIsaac, get to play up to three personages while the women stay, bar Rose Riley (who is not only Anne but also a Prince), play the one character all the night: Sandy Gore (a ponderous vocally velvet tamed middle-class Queen Margaret - no 'Mad' Margaret here), Meredith Penman (an emotionally plumped Queen Elizabeth, easily reduced to naturalistic anger and tears) and Sarah Woods (a decidedly suburban-type, Duchess of York - reminiscent, to me, of the present Queen's late mother in temper). For the men the costume changes, unfortunately, do not efficiently demarcate the many characters that they are burdened with, and without much, if any physical adjustments by the actors, a pre-existent knowledge of the play is an absolute necessity to understand what is happening (WTF?) (It is an odd conceit to believe that the audience has a knowledge of the play as keen as the Director or Actor on stage, is it not? Some of the audience, if not most, will be meeting this play for the first time, and peeling off parts of clothing might not be sufficient clarity for story or character).  For all of Ms Mulvany's clarity the rest of the play production is mostly shrouded in a fog of half-hearted, half-energised charades.

What can one say?

To not see Ms Mulvany's extraordinary performance, as Richard 3, would be a loss, to regular theatre goers. So, I recommend that you study up the play (read it, or watch the Olivier version, at least), and then go with a prepared 'guide' to help you hurdle the conundrum of Mr Evans' Direction. It is a better job than his OTHELLO, at least. Mr Evans is his program notes tried to draw Mr Trump's presence into the production's validity. Might not Mr Putin or, considering recent events in Malaysia, Kim Jong-un be more appropriate? Ah, well. The more things change, the more things stay the same.
Posted by Editor at 12:08 PM