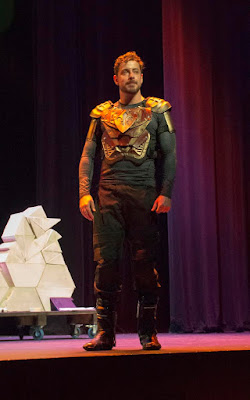 Says John Galea, the Director and Script Editor, of SUPERHAL:


When watching Henry IV, Directed by John Bell, "I could see that there was a fully fledged archetypical origin story, a mythic father/son conflict (the source of Mario Puzo's Godfather) sitting in between history and legend. ... As usual, my head was full of sic-fi, fantasy and Marvel. ... I was encouraged by the hugely positive reaction to the Puzzle's 2012 production, THE TEMPEST - Steampunked! The thought occurred - what if we made Hal's story a literal Superhero Origin Story. ...

An inspiration. An idea.

Unfortunately, the ambitions of Mr Galea seem far beyond his present capabilities. The best of this three and a half hour experience in the theatre (that includes an interval, at which some of the audience left) is the editing of the two sources, Henry IV and Henry V. Though, don't you think that if you were to write or produce a Sci-fi, Marvel fantasy, that it would be in half the time? In 90 minutes not 180? More courageous editing should have gone on, or, were you really wanting to do a Shakespearean production? The other better thing is, that there is some clear language handling by some of the actors - unfortunately, not from all.

I am writing this not because this production should be seen, but out of an admiration for the artists, especially, the actors who have toiled and committed themselves to this production. Three and a half hours a night - and all that rehearsal time commitment! My Goodness. It represents, for me, the appetite of these artists and the sheer bloody hard work that they have given to get the opportunity just to practise their craft. This work should not go un-acknowledged, therefore. Appreciated, one way or the other, at least. And, it is therefore with some sadness that I cannot recommend that anyone, necessarily, make an effort to see it.

Richard Hilliar, as Henry/Hal, steers, imperturbably, through this immense challenge. He has some support from Emily Elise, John Michael Burdon, Kieran Foster and Emily Weare.

Some of the costumes are, individually, adventurous, but fail to represent a world - Superhero Marvel , Game of Thrones reach, or not. The Lighting is awfully pragmatic. The Composition and Sound design woefully unhelpful - cued to dominate textual clarity, often. The famous St Crispian speech, for instance, lost in gratuitous noise! What, Mr Galea, were you thinking? The Set Design, also, by Mr Galea, inadequate.

Bravo, to go where angels fear to tread - on the gigantic stage of the Parade Theatre Stage. SUPERHAL, represents a vision of a fantasy - on lots of levels - on behalf of Mr Galea and the Puzzle Collective. It is indeed a puzzle that there was not more sage advice given to the producers. One knows the expense of hiring this immense space.

The courage and grit of the performing artists, I salute.
Posted by Editor at 9:08 AM