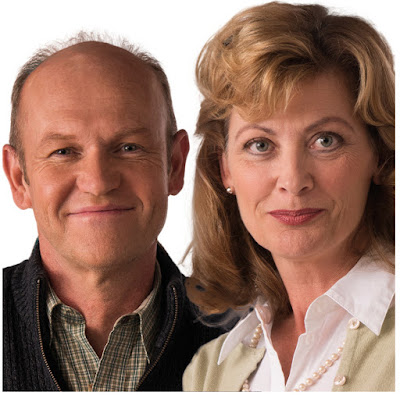 TWO is play by Jim Cartwright written in 1989. It is a play for two actors playing fourteen characters. TWO, like Mr Cartwright's first and famous play, ROAD (1986), comes from his identity and personal ownership of the private dilemmas of his community, focusing on the marginalised and disenfranchised. He was born in Farnsworth, Lancashire, and has lived in that 'Northern' area all his life. TWO, reflects the Northern community coping with the government of Margaret Thatcher and its effects on local industry and, consequently, the hardships, more often than not, borne privately in the suffering 'internal' domestic world of family relationships. It reveals through a series of solo and duet scenes the community spirit of those people surviving a day-to-day routine, that is fuelled by crisis and economic strain as reflected in the environs of the local pub.

This production at the Ensemble, Directed by Mark Kilmurry, has shifted its location to a pub in regional New South Wales (NSW), but still has set it in 1989. The production/play really gains nothing much by doing so, except a 'colour' of incongruity. The political and social conditions are so different in the Fraser, but mostly, Hawke Prime Ministership, of the Australia of 1989, to that of the Thatcher years in the United Kingdom, it seems to be, when reasoned, a shallow adjustment. It does save a dialectical burden for the actors, I guess. But, oddly, and certainly, the Australian dialect adopted by this company of actors sounds relatively 'posh' to that of a regional/country town in NSW, either now or in 1989.

The play begins with two characters, The Landlord (Brian Meegan) and the Landlady (Kate Raison), serving behind the bar of their jointly owned pub with a cheery/flirty public-face contrasted with a frustrated/angry private face. Their 'hostile' story is threaded throughout the play and concludes the play with a bleakly tragic conflict and confession of strained feelings of guilt and recrimination, concerning a 'lost' child. In between, the same two actors present vignettes of other community relationships between husband and wives and single survivors that are sometimes sadly funny or horribly vicious in subtle observation. There can be some laughs here, and my audience responded, sometimes with 'happy' applause at its cleverness (or, the cleverness of the actors, I'm not sure), that was contrasted with some melodramatic, heart-rending sentimentality, that, similarly, my audience responded to, with the cuing, by the Director and the Actors, to a respectful (but shallow) emotional shading to the reality of the events of the play.

The problem with this production is that Mr Kilmurry, has tended to treat the play as a boulevard bourgeoise entertainment instead of the gently but accurate forensic exposure of a community in strife against itself. Of the social fabric of the cornerstone of modern society, the family, under unbearable, petty, but inevitable animalistic reaction to the difficulties of close survival. The content of Mr Cartwright's play and its revelation of pain have been relatively 'lightened', superficially dealt with, avoiding all the anger and grief, as the well-spring of the writer's observations, choosing the lightweight distancing choices of middle-class comedy and sentimentality, to keep, strategically, I suppose, the audience 'happy' and in a mood of having a 'good time' at the theatre. The play should be pointed as a social indictment of a way of life forcibly weighting ordinary people with behaviours of an untenable kind. Examining the human cost of government economic rationalisations on ordinary people. (The play's basic contemporary relevance of community strain in the welter of the present internet/computer revolution could resonate powerfully as well for some of us.)

It begins early in Mr Kilmurry's Direction of choices, to keep this play from too much unsettling emotional confrontation and social criticism, when he directs Mr Meegan and Ms Raison in a comic duet of rancour in the opening bar scene, that is reminiscent in style and acted manner of the famous Noel Coward husband and wife backstage tussle in the comic one-acter: RED PEPPERS. At no time from that first introductory scene, or during the many re-visits to the Landlord and Landlady, throughout the play, do we have a hint of the tension of the tragedy that is underpinning the psychological logicalities of the petty cruelties that this couple inflict on each other. So, that when we do come to the last pain filled scene, that reveals the reasons for those personal tensions between the couple, the inherent 'melodrama' of the writing is exposed by the 'glancing' grasp and relatively, 'pretended' depths of the true tragedy, 'displayed' by the actors. It is this weakness of tonal choice from the Director, throughout the production, that culminates excruciatingly in this ultimate scene of human dilemma, so that the 'truth' of the realities are, relatively, played as soap-opera melodrama. The thematic concerns of the writer are undermined, the strength and celebrity of this writer's achievements, diminished. This production is one that values theatrical comic gesture and characterisation over and above the social realism at the core of the writer's gifts.

And Although, Mr Cartwright has not the utter 'courage' of a Ken Loach, a fearless British film-maker working in the same area of concern (RIFF-RAFF (1991); LADYBIRD, LADYBIRD (1994) where the 'truth' is told in unflinching reality, TWO is still a play that ought to send, similarly, messages of protest about a social system that is so merciless and so deliberately anaesthetised in its elected governmental actions. That our world is still in that flux of hypocritical societal concern for economic profit over human consequences, Mr Loach produced the award winning I, DANIEL BLAKE, in 2016. (I wonder, how many of this audience elected (elected) to see this important but difficult and confronting film?) This Ensemble production and the acting of TWO seems to have elected to entertain its audience with mild sentimental catharsis instead of the stark tragedy.

This production pleased the Ensemble audience I was with and I guess the Artistic management knows what style of 'horse' will make a winning at the 'post'. I note, that many of the critics have concluded, as did my audience, that this production of TWO is a good time in the theatre and well done. I, just, cannot understand why this play was chosen for the season, if it's social critique was to be reduced in its human impact, and presented, instead, as a relatively, light entertainment with a warm-hearted comfiture.

Mr Cartwright has written, in 2016, a sequel to this play called TWO 2. By the way, his most famous play is the fantasy escapist: THE RISE AND FALL OF LITTLE VOICE (1991). Some of you may remember Jane Horrocks and Brenda Blethyn in the 1992 film.
Posted by Editor at 8:30 AM