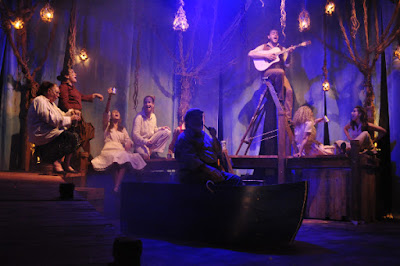 The Genesian Theatre, like the New Theatre, are two of the oldest theatre institutions in continuing practise in Sydney. Both are classified as Amateur Theatres.

The definition of 'amateur' in my Macquarie Dictionary provides an idea I cherish:


One who cultivates any study or art or other activity for personal pleasure instead of professionally or for gain.

This can define most of the participants who toil for these companies. However, it should be noted, that even in this supposedly sophisticated city, these theatres (and other organisations) are also, still, important places which nurture the aspirations of young artists by providing opportunity for 'real' activity, helping the honing of skills and artistic vision, where no other resource exists. Several artists in this production of UNDER MILK WOOD are such aspirants. Hence my attention and attendance. I was invited. I wished to appreciate their commitment.

UNDER MILK WOOD, by poet, Dylan Thomas, was written as a Play for Voices - a radio play. It was an unfinished text when the writer died, prematurely, in 1953. Staging it is a challenge. The Sydney Theatre Company (STC) did so a few years ago with mixed results. True here, too, the production by Ylaria Rogers, has similar hits and misses.

The Set Design by Martin Searles and the Lighting by Liam O'Keefe provided a very attractive dream scape to present the many, many characters and stories of this Welsh sea-side town through the cycle of a one day time. Nine actors create some fifty four characters. The Costume Designer, Pheonuh Callan, has wrought tiny miracles, as these valiant actors pop-off and pop-on in different modes of apparel to distinguish their tasks, rapidly. It demands a very busy - hectic? - effort for the actors.

It may account for the text sometimes lacking specific concentration, resulting, again sometimes, in an emotional 'gist' of communication instead of a careful identification and ownership of the words and so, accurate portrait of character and revelation of 'story'. There is much 'love' here, but not enough objective clarity. The play flattens out and drifts into a generalised and disengaging mood mode rather than thrilling particulars of evolving detail.

One begins to wonder of what is happening back-stage, for the actors to change and to pop-off there, to pop-on over there, in what seems to be no time at all (a kind of NOISES (less) OFF, going-on!) Sandra Campbell and Martin Searles were my favourite purveyors of this attempt to present the dream world of Mr Thomas - careful, intelligent vocal moulding of image and feeling.

It is always interesting to attend these sometimes neglected theatre companies and to be arrested by the work. The productions always are at the mercy of the skill of the Director and the available artisans and hence the 'quality' of the work can be very erratic and when one decides to support these theatres it can be a bit of a 'pot luck' experience (no less true, I suppose, with the so-called Professional Theatres - haven't we borne that blight recently?).

It is interesting to note, that my experience at the New Theatre, last year, was fairly horrendous, but this year I, and it, are having a very good run of production success (THE LITTLE DOG LAUGHED; CONSENSUAL, for example). Still, it is only April, isn't it?

I should declare that both the Genesian and the New Theatre provided me, as a young ambitious artist, some early opportunities and a deep 'love' and priceless education for the theatre. Many, many other professionals of renown can similarly recall their beginning in the Amateur Theatre theatres. Keep your ear open - it is word-of-mouth that alerts one to possible unexpected treasures.
Posted by Editor at 4:48 PM