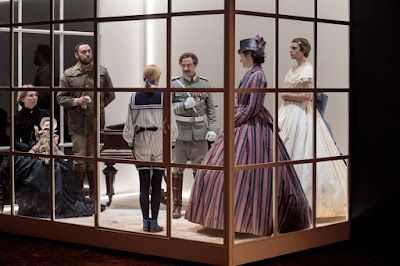 Let us begin at the top. This is the BEST production I have seen at the Sydney Theatre Company (STC) for many a long year. Get your self a ticket ASAP.

This production of CLOUD NINE, a play by Caryl Churchill, written in 1979, Directed for the STC by Kip Williams (their new Artistic Director), with Matthew Backer, Kate Box, Harry Greenwood, Anita Hegh, Josh McConville, Heather Mitchell and Anthony Taufa  – is an absolute "knock out".

To begin where all things in the theatre (and cinema) begin: The Writer and the Play. Caryl Churchill has been an idiosyncratic leader in the development of form for contemporary English theatre. In content, she has mostly explored the abuse of power with a bent to feminist themes and ideas highlighting issues of gender and sexuality.

CLOUD NINE is an early play in her oeuvre and was written for Joint Stock Theatre Group under the Direction of Max Stafford-Clark. The Joint Stock Method was to set up a workshop in which the writer, director and actors research a particular subject. The writer then goes away to write the play, before returning to the company for a rehearsal and rewrite period. The workshop for CLOUD NINE was about sexual politics. Ms Churchill tells us:


When I came to write the play, I returned to an idea that had been touched on briefly in the workshop - the parallel between colonial and sexual oppression, which Jean Genet calls 'the colonial or feminine mentality of interiorised repression'.

So, the first act of CLOUD NINE is set in Victorian Africa, where Clive, the white man, imposes his social and cultural ideals onto his family and the natives. In this act Ms Churchill sets up further insights by requiring cross-gender and race casting and it is, besides being hilarious, a pertinent contemplation. The second act is set in London in the time of the play (1978-9) with its burgeoning changing of attitudes towards sexuality, and, although, this is some 38 years ago, the act today, still, has much relevant confrontation to astonish and move one. (Although the two acts are 150 odd years apart the characters are only 25 years older.)

I had re-read the play before attending the performance and had felt the play was interesting but not arresting - as the Director, Kip Williams says in his conversation in the program notes;


When you read a Churchill play, you really only comprehend one layer of its meaning off the page. In her theatre, the performer is central to how the text makes meaning.

Any production's success is dependent on the quality of the actors and Mr Williams has found a cast that brings this text to vital life. The acting from this company is remarkably good, each a gem of great worth, but, all, in ensemble, a 'tiara' of rare quality - thinking, inspired, by Queen Victoria's jewellery!

Josh McConville brings a stony rigidity of sexual hypocrisy to Clive, the patriarch of the Victorian family in the realms of steamy colonial Africa - a man of his period exercising his privilege(s) - and gets to contrast this male power by having to play in the second act a young girl, Cathy, hardly out of her infancy, full of wilful exploration and explosive energy.

Harry Greenwood is breathlessly brilliant and disciplined in the cross-dressed role of Betty, the wife of Clive, with a hankering for infidelity with the local derring-do hero, Harry, and then is subtle and gently moving as the son Edward sensibly coping with his floating sexuality in the second act.

Anthony Taufa embraces Harry Bagley, a repressed sexual explorer - pan-sexual - with confused charm, to contrast as Martin, the husband of Victoria, a superficially engaged feminist male who can't help trying to dominate his wife - a marvellously difficult challenge which Mr Taufa meets with some grace.

Anita Hegh playing the Victorian mother-in-law and inhibiting arbiter of behaviour, Maud, blossoms appealingly with a growing, if reluctant, taster of sexual freedom as Victoria in the second act - it is a remarkably subtle and detailed 'drawing' of character development.

Matthew Backer, playing the self-loathing blackman-servant, Joshua, (Ms Churchill stipulates that a white actor play this role) balances this 'angry' tragedy with the blundering sex-ploiter Gerry, trying to find his true self in the dominating charge of his sexual appetite. Mr Backer creates another superb performance for us this year, the other, his recent 'turn' in ONLY HEAVEN KNOWS , at the Hayes Theatre.

Heather Mitchell is truly delicate and pathetic in the 'trouser' role of young gay Edward in the first act of the play and is positively radiant as Betty, in the second act, finding her independence and rights with gathering confidence and joy. The final moments of the production are worth the cost of the ticket and Ms Mitchell once more gives us a gift of storytelling and character that is devastating in its fine judgement and inhabited realities. Glorious, as usual.

Kate Box, playing a duo of women in the first act of the play, Ellen, a repressed governess, in the wiles of Africa, a victim and 'slave' to the conventions of Victorian expectations, and Mrs Saunders, a widowed, emancipated woman of courage cutting a swathe through the jungles of Africa and the conventions of the period. She is remarkable in the powerful contrasts between confused, gentle and desperate Ellen to that of assertive, confident Saunders. The demarcation of each is immaculate and breathless in its finely judged timing - the speed of her costume changes are astonishing in their achievement, just in themselves! However, in the second act, she 'tops' those characterisations, when as a single mother-lesbian, Lin, Ms Box creates a woman finding her self with a delicate, compassionate insight that reveals an actor with consummate skills of intelligence and emotional truth with a finely managed vocal and physical characterisation. Collectively, it is a stand-out performance.

It is a simple joy to write of this company of actors who bring such humour, insight and compassion, skill, to the satiric writings of Ms Churchill, and credit must go to Mr Williams in his astute casting ability. That this company of actors can bring such individual and ensemble gifts to this production one wonders what they, if they were a core to an Ensemble Company, what could they bring to the STC stage on a regular roster. (I have a further list  of actors to add to that co-hort!)

The Set and Costume Design are by Elizabeth Gadsby. It was with a sense of 'oh, no!' that I greeted the white, windowed box, set in an upstage corner, and although one was appreciative of the metaphorical conceptual statement of the idea-image, it is in the staging practicalities that it fails. Scenes in the 'box' lost vocal clarity and dynamics - the temperature, tempo of the play dipped every time it was used - one was always grateful when the actors came out and we could engage once again with the full sound of the embodied voices of the actors instead of coping with a cool and confused echoing, broadcast (?) shallowness of sound emanating from the box. The soil floor of Africa in the first act was covered by a 'grass' floor of the London park in the second. The stage-management must have been relieved, although it is the elaborate period costuming of the first act that 'suffers' the most 'damage' with that soil(ed) choice - it is a usual preference in the aesthetics of Mr Williams (e.g. THE GOLDEN AGE, FALLOUT.)

An intricate element of the production's success is the Music Composition of Chris Williams and the Sound Design of Nate Edmondson, whilst the Lighting Design by Alexander Berlage is subtly supportive and beautiful.

CLOUD NINE is a must to see. One might think that this 38 year old play might be slightly dated in its sexual political concerns - and in the contemporary detail of the evolving sexual platforms of our age that is quite true, but in the cultural overload of traditions still affecting us, nothing much as changed - look at our own governments' prevaricating on same-sex marriage, for instance - and if the 'old' powers could, the 'Victorian' ethos would be reverted too, no doubt. CLOUD NINE is as relevant as ever. Besides, artistically, you will not have seen better at the STC for some time - the quality of the Acting and delicacy of Directing is astonishing and all inspired and supported by great playwriting from one of the living Giants of our time: CARYL CHURCHILL.

P.S. It is of interest to me that all the actors are graduates from the National Institute of Dramatic Art (NIDA), that is 'old' NIDA, and that the Director, Set and Costume Designer, Lighting Designer and Sound Designer are, also, graduates. I should declare that I, once, taught at NIDA, and have watched these actors grow over the past years with interest - I do have 'inside' knowledge and observation of these actors over many, many years. It is, however, not prejudicial favour that caused this production's reportage by me, and you can best judge that, by seeing for yourself.
Posted by Editor at 2:29 PM