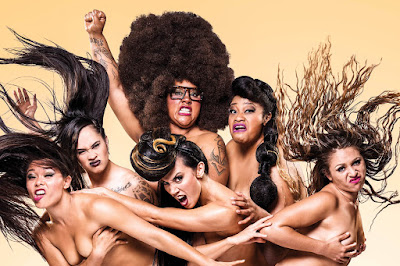 HOT BROWN HONEY, is a hybrid burlesque/cabaret 75-minute performance featuring dance, poetry, comedy, circus, striptease, song, hip-hop, beat-boxing and political effrontery of a hilarious and rousing kind, all of it with a serious intent. There is much (possible) 'offence' offered but it is couched in the most embracing warmth of activism that no-one could really take umbrage and, rather, only 'grow' in a 'bracing' perception of the daily oppression of being 'a hot brown honey' in a white patriarchy. In truth the show, ultimately, spreads its intent for the recognition of the debilitating plight of all women in much of our habitual cultural behaviours. Says, the Leader/Mc of this hive, Kim "Busty Beats'' Bowers: "We do this for the women who cannot speak. We are taught that silence will save us. But we will make noise!"

In a strip tease emanating from a maze of ostrich feathers we see layer upon layer of political stereotypes removed until the women stand before us in maids costume - black skirt and tops with white frilly aprons. We watch a reverse striptease of an exotic island maiden that distills the sexist 'romanticism' of such cultural cliche with hilarious ingenuity (Lisa Fa'alafi). A visually confronting costume is animated by Ofa Fotu, has she belts out the familiar lyrics of IT'S A MAN'S MAN'S MAN'S WORLD - the song for the rest of time will be heard by you in a completely new and alarming context. And late in the show, Crystal Stacey performs a circus/burlesque 'strap' act that becomes much more than that. It gradually transforms into a horrifying exhibition of a woman enmeshed in a web of physical abuse. Says 'Busty Beats', "Will you stay the same? Or, will you rock the boat?" To the RnB/soul tune of ROCK THE BOAT (Hues Corporation-1973) all of us are urged onto the performance space to dance together in a unified stand-up for enlightenment and justice - for rights. Enriched and inspired, perhaps.

With all this political confrontation the show in a welter of boisterous tongue-in-cheek ferocity using the beat of uplifting music and a sense of empowering optimism invites and permits all of us to experience the exhilaration of the whole combined tone of the evening with a hope and faith in the possible energy of/for an enlightened change. The six Australian women in this performance troupe: Kim "Busty Beats" Bowers (co-creator) Lisa Fa'alafi (also, the Director and Co-creator), Mateharere Hope "Hope One" Haami, Juanita Duncan, Ofa Fotu and Crystal Stacey come from heritage ranging across Aboriginal Australian, Samoan, Tongan, Maori, Indonesian and South African. It is a combustible mix of perspective that is as important as it is entertaining for the era we live in. The time seems ripe for such a show.

Political burlesque/cabaret with an exuberant intention to awaken its community to some of the unpleasant realities around us. Should see.

P.S. The Costume Design is especially amazing - I mean amazing. The Set and Lighting Design is, too, a major contributor to the energetic thrust of the performance. Can't find the names of these artists! in my research! Thanks for the ingenuity. (Daniel Anderson, Lighting?)
Posted by Editor at 9:14 PM