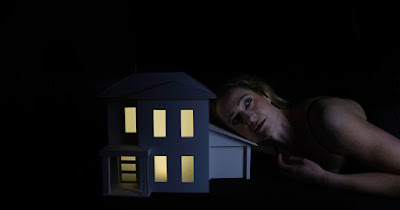 LITTLE BORDERS is a new Australian play by Phillip Kavanagh and was the winner of the 2011 Patrick White Award.

This production at The Old 505 was wonderfully good. Director Dominic Mercer have with his Designers: Charlie Edward Davis and Jeremy Allen, a clean dropped cyclorama unrolled onto the stage floor forward towards us, decorated only with a small circle collection of 'toy' model houses that can be (magically!) lit from the inside. This space was brought to eerie life with an atmospheric Lighting Design by Emma Lockhart, mostly, with a bluish (ghost-like) tinge - ominous - supported well with Composition and Sound Design by Clemence Williams.

Two young actors: Lucy Goleby and Brandon McClelland, individually brimming with acute craftmanship and astute sensibilities to the writer's affects to achieve his attentions, have a remarkable empathetic chemistry and seamless concentration of delicate insight, a duo of wit and satiric gentleness, each dressed eloquently by Isabel Hudson for the shifting storytelling. They are a formidable and talented duo. An outright bonus for us, indeed. All of the elements of the production are exquisitely shaped by Mr Mercer.

LITTLE BORDERS has us meet a modern couple full of modern paranoia and mania. Elle and Steve are recognisable in the world we live in, if not in the mirrors of our own home - quell the horrors of that recognition, and be grateful for your own control and restraint, I presume and hope! The play is a direct conversation to us, the audience, in duet and in monologue. Regular readers of this blog will recognise my dislike of this 'modern' common formula of playwriting. However, so gifted were this duo of actors, and the accurate precision of the musical tempo conducted by Mr Mercer, I was transported into the centre of the play without emotional hesitation or my usual prejudices about the playwriting-methodology pricking my consciousness - I was involved, 'lost', in the storytelling by these characters - these actors and Director.

This is the first production of this remarkable prize winning play of 2011 some 6 years after its celebration by the Patrick White Award. Says Mr Kavanagh in the notes to the newly published text: 'At the time of writing it felt speculative--a satirical world we could soon end up inhabiting if our political discourse continued on its rhetorical path of division; if we were encouraged to give over to fear and panic; if the violence we perpetrated outweighed anything that was aimed at us.' And, when one reflects where we are as a culture - civilisation - in 2017, that is what seems to have, more than less, manifested, and it makes this play and this prescient playwright worth attending to.

Certainly, I need to see a new production of REPLAY, by Phillip Kavanagh, the play produced at the Griffin, a few years ago, which was for me a confused and mystifying experience. One sensed the talent of the writer and that was despite the production on the stage. Watching this first play, LITTLE BORDERS, has made me extremely curious about the possibility of a different, new production of REPLAY, to discover what it is saying.

LITTLE BORDERS at The Old 505 was a pure gem of theatre making. I wish that you were able to catch it, but, alas, the short season has finished. But, who knows? Will keep you informed, if it has a resurrection.

P.S. Phillip Kavanagh's LITTLE BORDERS is the first official 8th Buffalo play script to be published. It is a text for two young actors with some wonderful monologues. Contact: 8thbuffalo@gmail.com
Note that Sport For Jove also have self-published some of their original texts e.g. Chekhov's THREE SISTERS, in a new contemporary Australian translation by Karen Vickery; ANTIGONE, a new text by Damien Ryan. Check their site.
Posted by Editor at 7:38 PM