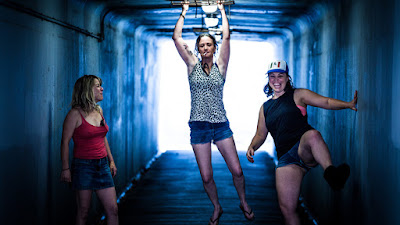 SHIT, is a play from Patricia Cornelius, that was seen, briefly, as part of the Sydney Festival, in January, this year, brought back to Sydney, for a short season, by the Seymour Centre.


Ten vital female theatre makers with vast work histories have come together to bring a cast of three into a daring and powerful theatrical experiment with female characters whom we rarely see. These are women who defy gender demarcations, who transgress the boundaries and restraints of social order and expectation. Their language is brutal and uses a grungy poetic style to offer moments of beauty and relief.

Nicki Wilks, Sarah Ward and Peta Brady play three women (Billy, Bobby and Sue) who have never had a real chance to be any thing other than SHIT. They are 'mean, foul mouthed, down trodden, hard bit, utterly damaged women'. These women simply are, are, products of a society that have neglected, and still rejects them with bureaucratic formality and lack of human recognition and concern (rights).

With the 'poetics' of Ms Cornelius and physical 'choreography', Director, Susie Dee, with Design by Marg Horwell, and Lighting by Rachel Burke, presents these women existing in an 'underclass' world of rigorous prejudice that is cruelly demanding and unforgiving to any kind of 'weakness', even in their own created milieu.

The content and language of the work is angry and confronting but seems to have become, in performance, a little too rote. The performance I saw lacked the raw power of what they were crafting, rather it was routine and superficially experienced, allowing the audience to be more easily detached than they, maybe, should be. They performed, they were impersonators, we watched, intellectually attached but viscerally, relatively, untouched (in any way). They did not seem to be experiencing an existence of a real nihil - a thing of no value, shit.

This explosive uncompromising work requires explosive cauterising inhabitations by the actors for it to have a truly powerful impact. I never believed that I was experiencing the life of Billy, Bobby or Sue, rather watching well drilled performers. The play better than the acting.

Disappointing.
Posted by Editor at 4:14 PM