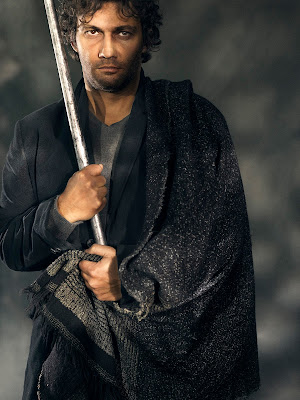 Opera Australia present PARSIFAL, an opera in three acts by Richard Wagner, Libretto by the composer, in the Concert Hall at the Sydney Opera House. August 9,12 (matinee), 14 August.

Leading the Opera Australia Orchestra, Pinchas Steinberg, as Conductor, harnessed an impressive cast of performers to give a concert version of this work of real beauty. Jonas Kaufmann sensitively (carefully) sang the leading role of Parsifal, supported by Michelle De Young, as Kundry; supported by an impressively powerful Kwangchul Youn, as Gurnemantz; Michael Honeyman, as Amfortas; and Warwick Fyfe, as Kilngsor (his physical inhabiting of the character and his function a theatrical wonder). In fact, all of the singing offers from this large company were of a uniform quality, including the Opera Australia Chorus and the Children's Chorus.

Wagner (1813-1883) saw opera as 'Gesamtkunstwerk' - the total work of art. For Wagner, the orchestra should have as many colours and textures as the singing, the drama should be paramount, and the stagecraft, including scenery and costumes, should have equal weight to the music.

I have seen this opera in performance once before at the Metropolitan Opera in New York with Placido Domingo, Jessye Norman, Kurt Moll, James Morris and Ekkehard Wlaschiha in the early 1990's. One would have to agree that the work in the theatre is a powerful ritualistic experience resonant with a religiosity of deep feeling. In concert, the lack of the visual staging, the scenery and the action of the characters (in mime with orchestral 'speaking'), can hamper the full appreciation of what Wagner had envisioned. Much of the religious impact is diminished because of the lack of the visualisation in the staging. Still, though, the music from the singers and the orchestra gives one an experience of wonder and appreciation. Wagner is a unique artist.

PARSIFAL, a live concert experience of a memorable kind.
Posted by Editor at 8:24 AM