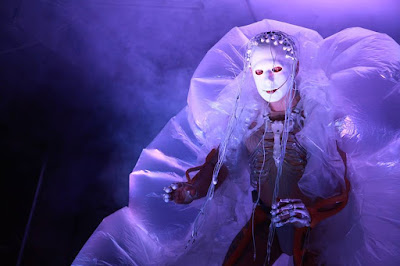 
Justin Shoulder is an artist working in performance, sculpture, video and nightlife/community events production. His main body of work the "Fantastic Creatures" are invented alter-personas based on queered ancestral mythologies. These creatures are embodied through hand crafted costumes and prostheses and animated by their own gestural languages. Shoulder uses his body and craft to forge connections between queer, migrant, spiritual and intercultural experiences. He is a founding member of queer artist collective The Glitter Militia and Club Ate, a gang of Asia-Pacific sissies.

A few weeks ago I travelled to Blacktown Art Centre for the opening of BALIK BAYAN, a curation of works by Filipino-Australian artists as part of the Philippines Art Project (until November 2). I went, particularly, because there was a video work that involved Justin Shoulder. I have been a curious fan of Justin Shoulder's work over the past few years. His imaginative urges combined with a creative skill has impressed me with his weird and wonderful costume creations. The theatre works have always been arresting visually if not always 'mechanically'. But, the wonderful thing, for me, the other night, was to see Mr Shoulder, not just with a 'mind-blowing' imaginative creation and execution of costume, but, also, a development of maturity of control of his physical skills. It is this gradual and determined possession of movement craft disciplines that demarcates this work, for me, as real progress/advancement.

In the program notes there are some artist statements about the political inspiration and aspiration of this work, and they may, for some, bring some clarity to what this Performance Artist and his collaborators Victoria Hunt (Mentor and Artistic Collaborator), Matthew Stegh (Costume and Set Design), Corin Ileto (Composer) and Benjamin Cisterne (Lighting Design), were aiming to deliver to us. In my experience of the performance the meaning of the work was of secondary importance, although, not negligible, even in its present opaque resolutions.

There were, for me, some 'problems' with the second section of the work that was over simplistic and a little underwhelming in its artistic conception (on the other hand, a couple of my companions loved it) - although, I embraced the lengthy silent costume change with imaginative 'grace' - some have complained of it.

The first costume, and the linear exposition of its 'secrets' were remarkable and when re-connected to, in the latter part of the show, was a rewarding extension. However, it was with the third costume, that was of a living 'rock'-mountain that metamorphosed into a predator with a sphincter like head and mouth, that a true awe was achieved. The Lighting Design by Mr Cisterne and the Musical contribution by Ms Ileto lifted the work into a sphere of childlike wonder.

It is so rewarding to attend projects that offer other ways to create art. The Livework Festival, an annual presentation from Performance Space, curates from the 'happenings' and investigations of artists outside the 'traditional'. CARRION is a hybrid cannibalisation of various performance modes - in this case, at least, costume-sculpture and movement/dance.

What is interesting in the curation of this kind of Festival is that artists of daring, courage, weird idiosyncrasies, often existing - struggling, more often than not, struggling - way out on the margins/fringes of our art/performance networks are invited to present to a public showing of the progress, the newest iteration, of their obsessions in a very public space to, sometimes, a very discerning and experienced audience.

The thrill, and more often than not, the frustration of attending this kind of work, is that failure is as great a possibility - an option - of the experience, as success will be. But that engagement with a puzzled/angry audience can be, for the real artist, an invaluable lesson in defining how they are 'communicating', as much as an unmitigated success can be. It is the Performance Space curation teams' integrity, that is of paramount importance in helping the  development of the work of these artists of evolving curiosities and skills, even at the risk of failing its audience. It should, however, be, I reckon, the risk of witnessing failure, of suffering boredom, that is part of the 'contract' that a Liveworks Festival audience engages in. For me, watching CARRION, was to witness the continuing (and pleasing) evolution of the work and, especially, skills of Justin Shoulder.

CARRION was not perfect but it is building on the opportunities that public showings 'force'. I reckon Time and Perseverance will deliver us an artist of unique achievement. I will be glad to have been part of his fan club. An act of faith and hope in the future.