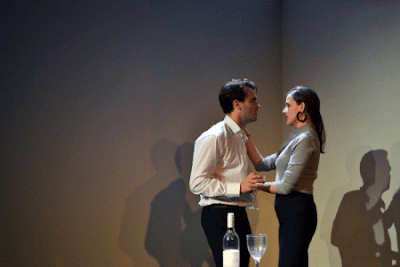 PLASTIC, is a new Australian play, by Mark Rogers.

This play tells us the story of a young scientist who has an altruistic belief in his work and that it will be of enormous benefit to the world. His only problem is that the theory cannot be verified by successful experiment. Caught up in his own ego and the pressures of corporate industry - the subsidisers of his research - he dares to publish and in a public presentation is unmasked as to be practising in a fraud, euphemistically known as, 'scientific misconduct' - which, of course culminates in an enormous scandal.

The Writer, Mark Rogers, and the Director, Sanja Simic were both fascinated by the examples of real fraudulents (e.g. Diederik Stapel in social sciences, Haruko Obokata in stem cell research) and to "what was going on in their heads, what drove them, and why", and hoped that PLASTIC would give some answers - insights - to those questions. The writing amounts to a clear, but, relatively superficial narrative of cause and consequence with next to no incisive interrogation of the character motivations, reasons for the why, or much conversation as to the ethical debate that such circumstances must throw up. Ms Simic, contributes to the shallowness of the interrogation of the people and issues in the writing by encouraging an overtly comic/satiric tone to the bravado of the actions of the characters in the forum of the play action.

All the actors: Nick Bartlett, Hannah Goodwin, Harry McGee, Doug Niebling and Michelle Ny, have been well drilled but lack back story to give their responsibilities much dimensionality. The play remains mostly a comic strip and thread bare enlightenment. Nick Bartlett, as the misguided ethically bereft scientist, has charm.

Sparely Designed this is not a difficult night in the theatre, but it is a disappointingly shallow one.
Posted by Editor at 8:25 PM