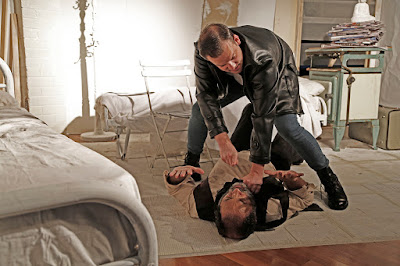 It seems a while since we have seen a play by Harold Pinter. Oh, no, there was the Sydney Theatre Company's NO MAN'S LAND and more recently, BETRAYAL at the Ensemble Theatre. It is THE CARETAKER (1959) that we have not seen for a while. This play is one of the earliest of his successes along with THE BIRTHDAY PARTY (1957) and THE HOMECOMING (1964) that propelled Pinter into the pantheon of one of the British greats. 'That he occupies a position as a modern classic is illustrated by his name entering the language as an adjective used to describe a particular atmosphere and environment in drama: "Pinteresque"', informs the program notes to this production by its Director, Courtney Powell.

In this small but comfortable playing space, Ms Powell has contrived a modern rendering of the play, divesting it of the overstated, usual, shackles of the reputation of the writer as 'an absurdist' and instead emphasises the basic humanity of real people marginalised by poverty and education who still have aspirations for a good life. At its heart, THE CARETAKER is a character study, an observation of three men in a house, two of them brothers: psychologically damaged Aston (Andrew Langcake) and 'bovver-boy' Mick (Alex Bryant-Smith), and an invited homeless man, Davies (Nicholas Papademetriou), struggling to find connection, identification and a sense of 'belonging'. There is, in a series of scenes, little plot but much mystery as the characters gradually reveal their strength and weaknesses, that evolves into a senseless power struggle in a deprived world. There is in the watching of the play a growing sense of a sinister tension that gratefully dissipates by the play's end.

One can see the truth of Pinter's observation of a community he knows in the nineteen-fifties in a recovering blitzed London, squatting in their damaged homes with a collection of found and hoarded objects/debris. But what Ms Powell does with this production is make, through the gentle work with her actors, bring us a world that feels unsettlingly contemporary and close by, reflecting the divide of the Australian-Sydney moneyed classes, the have and the have-nots, with an insidious resonance.

The performances of these actors are scaled for this space with a naturalistic intent in an abstracted white set, by Natalie Hughes. Mr Papademetriou draws a quietly detailed perplexity of experience of reactive defence with his creation of Davies, whilst Mr Bryant-Smith's Mick is mysteriously a physical threat and menace, that fortunately reveals itself as more bravado than intended action. Mr Langcake, as the damaged electric-shock victim, is uncannily distressing in the passivity, the 'flatness' of his choices as Aston - it is a very interesting (and daring) reading of the character.

This production is a modest offer but a very satisfying experience. A great play, a classic play, I believe, is always proved by the elasticity of interpretation made plausible and possible. Throwingshade Theatre Company have done that with this production of THE CARETAKER..
Posted by Editor at 1:16 PM