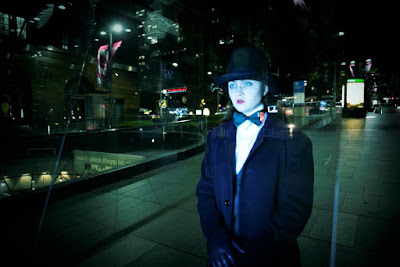 This is a version of Charles Dickens' A CHRISTMAS CAROL that is so opposite the Belvoir delight of a few years ago that a proper regard of the company title that is presenting this new work at the Kings Cross Theatre (KXT): Lies, Lies and Propaganda, ought to be fully digested before considering taking your children.

The writer, Melissa Lee Speyer, along with her Director, Michael Dean, and probably the full team of collaborators (including Assistant Director, Jasper Garner Gore),  have taken the genius of Dickens: his framework and characters, and given a contemporary twist to this telling of the well loved story fully informed by the events of this year, this annus horribilis, 2017 - you know of what I am referencing -urgh!

Christmas Past, Christmas Present and Christmas Future is presented to this Ebenezer Scrooge (Bobbie-Jean Henning) with a great deal of sauce/source whose ingredients are mostly satirical, cynical and, especially by the time we get to Christmas Future, bleak and very, very uncomfortable - and not far from the possible consequences of those 'someones' with power and access to a 'button' having had a tantrum. This is a piece of 'propaganda' that only the most aware might want as part of their Christmas carolling and bonhomie.

For this 'black' take of the story there is a black and white costume themed design, with shades of grey, fluidly managed in the space, with some tight choreographic Direction from Mr Dean, (Lighting Design by Christopher Page), and song supported by a live sound accompaniment by Miles Elkington, that is a major influence to the affect of the production - a live improvised urgency.

This is A CHRISTMAS CAROL, for the jaded and dejectedly concerned members of our community - and there should be many of you out there that ought to enjoy this work very much.
Posted by Editor at 10:47 PM