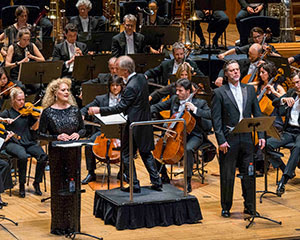 Sydney Symphony Orchestra presents BLUEBEARD'S CASTLE, with Bach and Brahms, in the Concert Hall, at the Sydney Opera House. November 29. December 1 and 2.

BLUEBEARD'S CASTLE is one of a concert item from three B's of the music world: Brahms, Bach and Bartok. Besides the initial B as a common denominator/cue for this concert it is also a presentation of three works that involves the human voice supported by an orchestra.

The first work was from Johannes Brahms: Alto Rhapsody, Op.53 with mezzo soprano, Michelle DeYoung and Men of the Opera Australia Chorus. A leader in the Romantic movement of the nineteenth century, Brahms wrote this work as a wedding gift to Julia Schumann, it being, it seems, a gesture of his own undeclared love for her. The text is from one of Goethe's "Wanderer Odes". I do not appreciate the work of Brahms and probably need a guide to assist me to him. This work, even though I have read of its high regard, did not really move me or hold my interest.

To follow was a work from our second B, Johann Sebastian Bach: Ich habe genug - Cantata, BWV B2. Baritone, David Greco was the soloist with the orchestra. Bach is one of my delights. The Saint Matthew Passion one of my all time favourite pieces of music. This work was composed in February of 1727 for the Feast of the Purification.

From the program notes, by Gordon Kalton Williams "the text of the Cantata No 82 is connected with the words of Simeon which are interpreted as: 'after the Saviour has appeared, man can die peacefully, putting his trust in the act of Christ's redemption.' The music is of the usual hypnotic pleasure from Bach, featuring, as well, the oboe in a beguiling central place in the music.

Having just read a new book of history: THE DARKENING AGE - The Christian Destruction of the Classical World, by British historian, Catherine Nixey, I was particularly alert to the text of this work and when the voice reaches the final verse I could not help but whisper to my companion, despite my love of the music, that it was a further repetitive recitation of Christianity as A Death Cult, for the life on earth is one of misery and the more misery I have here on earth, the greater my joy in the other world with God. So hurry up death!:


I long for my death,
I wish it would come soon
Then will I be freed
From earthly bonds of misery.

Rather a joy of life I reckon, which gratefully, the music of Bach nearly always gives me.

Using the story written by Charles Perrault, in 1697, 'Barbe bleu', Bela Bartok in 1911 with a libretto by Bela Balazs (influenced by the Symbolist playwright Maurice Maeterlinck and his libretto for Paul Dukas' ARIANE ET BARBE-BLEU), wrote a psychological study of male-female relationships and the elusive quest for a beloved. Bartok's treatment of the story is not that of a wife slayer as in the original Perrault story, but of man searching for a soul-mate of equal standing that will not lead to destruction of the psyche of one or the other, or both. In a letter to his mother in 1903, Bartok wrote:

I prophesy, I have a foreknowledge, that this spiritual loneliness is to be my destiny, I look about me in search of the ideal companion, and yet I am fully aware that it is a vain quest

(The musical motifs for each of the four wives of Bluebeard contain musical allusions to works dedicated to his own former loves; the first to Felicitas Fabian, Bartok's first love, the second to his beloved Stefi Geyer, the third to Irmy Jurkovics. Judith is, of course, Marta Ziegler, to whom it was dedicated: what a wedding present!)

Seven doors within the castle are opened, by Judith, one by one, to reveal the nature of Duke Bluebeard. He, beside her, takes her into a deeper and deeper revelation of his inner self which she, like the three other brides, fails to grasp - her fear of what she sees preventing her to truly understand what it is the Duke needs - intimacy that is soul deep - Judith joins the other wives in a chamber of memories, while, he, the Duke, recedes where "henceforth all shall be darkness, darkness, darkness.'

The music of this great small work is powerful (and lush) in its radiating orchestrations and full of the foreboding ratcheting tensions of the need of the doomed quest. John Relyea with his powerful bass sound and dignity of stance developed the tension of the work with great dramatic construct leading Ms DeYoung's Judith through the challenges of each of the rooms. It was a fabulous journey, from Mr Relyea, Ms DeYoung and David Robertson and the Sydney Symphony Orchestra.

The opera a tremendous concert experience in the theatre.
Posted by Editor at 5:45 PM