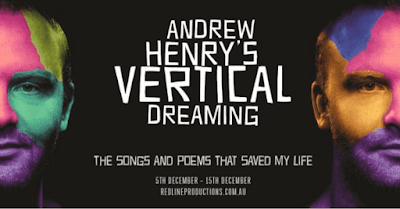 Andrew Henry - an actor/artist - has, from a very personal experience of depression, curated a dream of a vertical kind: a digging down and up into the psyche, using some found poetry, adjusted, sometimes, for his own 'truth', with 'the simple goal that this encourages others to talk and share and understand that it is ok not to be ok. ... That it is normal, and you are not alone.'

Mr Henry informs us in the program notes, that this work has been inspired by the following texts particularly:


AUDIOBOOK, by Neil Hilborn.
HANGOVER THOUGHTS, by Matt Coonan.
LIVING WITH DEPRESSION, by Dan Roman.
LETTER to a new crush, by Sean Patrick Mulroy.
RULES for a functioning alcoholic, by Shane Hawley.
PASSON , by Michael Lee.

These contemporary poems found in a book at a mental health clinic were an initial inspiration to a search and revelation. Deeply committed and emotionally naked, transformed into an incandescent speak, Andrew Henry uses poetry and songs, with the support of a music quartet - Lenore Munro, Paul Prespitino, Matt Ralph and Simon Rippingale - to take his audience into a conversation about the conscious rigours of a vulnerability that may trigger a feeling of worthlessness that sometimes poses, aggressively, the question: "What is it all for?"

All art, whatever its form, comes from the daring artist's need to express themselves through self revelation. Art never comes when it is spurred by an escape mechanism from self or life.  It demands that you tell a truth and not pretend. To work as an artist requires the ability to recognise what you know as the truth within you that will illuminate the task you have at hand, and then to have the courage to use it. To work as an artist, at the highest level, requires an accepted fragility and risk intensive choice. It is difficult enough to admit to knowing yourself and it takes real courage to reveal it.

(To name a few great artists at work that I embrace with care: Beethoven and his "Eroica" and "Ninth Symphony", Michelangelo's "David", Jeffrey Smart's paintings, Shakespeare's "Hamlet", Nureyev and Fonteyn's dancing, Olivier's "Othello", Hanya Yanagihara'a novel, A Little Life, all the film company of "Moonlight", and recently, locally, Ivan Donato in A VIEW FROM THE BRIDGE, or Ursula Yovich in BARBARA AND THE CAMP DOGS. - all of these works of art have caused me to weep with a recognition; there are others, believe me, as well.)

Great art can come when the artist dares to cut through nakedly to the edge of the abyss, the pit, the void and point it out, tell of it, and utilise it, as a tool to be possessed by, to be touched by lightning, to guide the rest of us to an assurance on how to live our life. (Chekhov, O'Neill, Miller, Shostakovich). Too, to help us, his witnesses, to draw the courage to endure our travails, both good and difficult. An artist has to dare at the edge of personal comfort, sometimes safety, to give the audience, the viewer, the listener a mirror to see themselves and to be given the knowledge that they are not alone and that it is okay to be not okay. That to be human is okay and that, perhaps, 'feelings', harnessed by 'reason', is the formula to balance. One, of course, need not to be an artist to explore the outer edges of depression - one simply has to be human.

In Andrew Henry's VERTICAL DREAMING, he gives us that gift. Feeling, balanced by the reasoning of the 'poet', in verse and song. The experience is short, only 50 minutes long, but is a balm for hurt minds and is of a generous proportion in all ways. Alexander Berlage has lit the show and Directed Mr Henry, in this intimate space, to an expression of some importance. Mr Henry's courage is great, the experience thought filled - shattering - for some, an assurance.