BROKEN GLASS is an installation and performance that has been four years in development. The stories of the artists, Lily Shearer, Liza-Mare Syron, Andrea James, Aroha Graves and Katie Leslie are used 'to remind us of the impact of colonisation on ancient practices associated with death and mourning in New South Wales and Victorian First Peoples' communities' and are based on their personal experiences of death and knowledge of historical accounts.

We meet at the Blacktown Arts Centre, are given some hospitality, and then taken by bus to the historic church and cemetery of St Bartholomew (1841 - built by William Lawson, one of the explorers who crossed the Blue Mountains, in 1813), in Prospect. The renovated church sits high on a hill surrounded by a very old grave yard, looking over all the country around it.

It is still Daylight and we were ushered into an old fashioned wooden hall, where we were greeted by some of the family of a recently passed 'Auntie', and we are invited to pay our respects, in the midst of which we have an insight into a light-hearted set of 'unseemly happenings that often follow formal funeral proceedings" , among family. It is 'folksy' and humorous, highly recognisable, but we are soon distracted by the appearance of a 'spirit' in purple dress, asking in 'language' for aid -food -whilst clutching an old hat box.

We are drawn to follow her and we travel outside to observe a modern practice at a mortuary. A body of an indigenous woman, naked, except for her grass skirt is laid on a gurney and two contemporary morticians describe to us in scientific jargon and fashion of what transpires. From the 'folksy' we are taken to a clinical 'science', that is part of the inevitable happenings around  death, imbued, however, with respect and a dignity of identification.

The 'spirit' re-appears and beckons us further, and we enter the old Georgian, restored church, where we sit around the edge of the space, that has a number of burial mounds, of sticks and branches, dressed with kopi ( traditional object (stone) used by women as part of the mourning process), lit from beneath, as by now the sun has set and twilight is engulfing us. Katie Leslie, accompanied by a musical composition by Brenda Gifford, dances a spiritual interlude that explores the physicality of grief historically performed by many First Peoples women. It was particularly gripping, intriguing and intensely moving, magically sustained. In contrast, we were then invited to move to the gathered front pews and are asked to join in several hymns of a Christian church service. This blending of the traditional custom of The First Peoples with that of the Church practice of the Colony was poignant in its side-by-side presentation. Before we leave this space we are invited to observe the Wailing of a woman in respect for the many dead in her family and community. It is a strife of self-inflicted 'violence' and mourning.

Once again the 'spirit' coaxes us further and we re-enter the world outside and are ushered to beautifully lit trees, serving as a backdrop to three graves decorated with broken glass, glistening and sparkling in light signifying the 'light' of the spirit passed. Ms Syron tells us of the history of the spirit that has been our guide, a spirit from 1797, who died with her child while seeking aid from a catastrophic epidemic of disease. There is some 'song' and the women turn from us and face the world beyond the peak of this hill.

It presented a wonderful 'metaphor' of the history of these women artists who have a heritage of the traditional life of the First Peoples and the 'grafted' one from the people of the colony, for they stand with the weight and beauty of their historic story, as if of another time, whilst in front of us the traffic of the contemporary Great Western Highway and the M4, noisily rushes past in the head-lighted darkness, balanced by the sound of a jet plane flying over-head, whilst behind, the silver 'slipper' of a new moon looks down on us. With this the installation and performance has grown to an experience of some great profundity.

We are invited back to the first wooden hall, where tea and damper with jam and cream are served and we meet the artists and each other. The effect of the work has been a significant individual journey and as well an enveloping group dynamic of transformative inspiration. It is simple in its concept, sophisticated in its process, and priceless in its giving to expanding our perception of the history of this land. It demonstrates a great generosity and empathy of spirit. - a heartfelt gift from these artists.

We boarded the bus to take us back to the Arts Centre, to the railway station, and to a perception of our history that one is grateful for. One has been changed. I am not the person I was a few hours before.

Moogahlin Performing Arts and Blacktown Arts have achieved a unique event and it is indeed more than what they intended, I believe: "A tribute to all our grandmothers, from time immemorial." It is also  an outreach to the unification of our entire community.  Knowledge can create understanding. 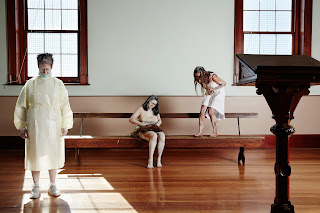