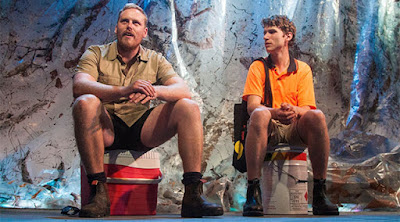 BURIED is the overarching title for the Australian Premiere of two short plays: THE SANDPIPER and SMOKIN' JOE, by new comer, writer, Xavier Coy. It is an auspicious debut. Both plays have distinct character voices within the context of a very dramatic arc of storytelling that keeps one suspended and enthralled.


In THE SANDPIPER and SMOKIN' JOE I am exploring (the idea of) trauma in your formative years following you into adulthood. For Hannah (in THE SANDPIPER) it has manifested itself in feelings of not being good enough and for Dylan (in SMOKIN' JOE) it has resulted in him being unwilling to change from his known culture for fear of being rejected again ... BURIED is an exploration into fear, loneliness and the search for companionship. Most importantly, its about people trying to move out of the shadow of past and into who they want to be in the future, if that's possible...

Hannah (Amelia Campbell) in a session with a psychologist confronts her doctor, Amy (Tara Clark), with a shared past that turns the table of the scenario upside down dramatically, in THE SANDPIPER. Finn (Nicholas Denton) arrives at his first day of work as a landscape gardener and meets his supervisor, Dylan (Xavier Coy), and has a journey that takes him into a series of new experiences that does not end well.

The promise of the writing is first class, and that is not to say that there are not areas for improvement - e.g. the tightening, editing of the action of SMOKIN' JOE. Mr Coy in his notes mentions the influence of Alex Buzo's NORM and AHMED and Edward Albee's The ZOO STORY, and there is a traceable 'fume' of play structure and character development in the BURIED writing that is discernible - what better 'mentors' could you have?

The writing is supported with acting from all the players that is committed and accomplished, elicited by Director, Johann Walraven, even though there are 'staging' problems, especially in THE SANDPIPER, that sometimes prevent the audience from easily entering the story with earlier empathy. In the longer of the two works (the entire evening is only 80 minutes long with no interval) Nicholas Denton, as Finn, gives a fascinating and erudite characterisation as an 'intellectual enthusiast' with not much 'street-wise' knowledge and Mr Coy, as Dylan, brings a sophistication of a struggling persona reaching out for a 'healthy' resolution but submits to fear that prevents developmental relief as a great step forward in his own life.

The Design team: Renee Halse (Production Design), Liam O'Keefe (Lighting Design) and Jessica Dunn (Sound Design) make a contribution that supports but does not intrude on the drama of the stories.

Mr Coy is a writer of some exciting interest, besides the fact that he is also a very intriguing actor, able to create a shape-shift that can demand empathy one minute, or revulsion the next. I recommend a visit to The Old 505 to see the team of BURIED in action.
Posted by Editor at 4:29 PM