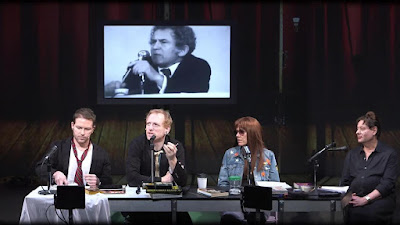 The Wooster Group grew from Richard Schechner's The Performance Group in 1980, under the leadership of Elizabeth Lecompte. It works in a deliberate theatrical form of experimental presentation. Its reputation is formidable and the fact that the theatrical explorations/methods of this company have been an inspiration for similar groups such as The Sydney Front (1986) and other participants regularly appearing in the Performance Space repertory - now seen mostly at Carriageworks - is tantamount to their acumen.

THE TOWN HALL AFFAIR, employs a mixed-media collage with five actors using a 1971 black and white Documentary TOWN BLOODY HALL, by Chris Hegedus and D. A. Pennebaker, which is projected in an edited form on stage and lip-synched by the actors, with the distraction, as well, of glimpses from a Norman Mailer colour film MAIDSTONE - written, starring and Directed by Mailer (in a scene with Rip Torn).

The TOWN BLOODY HALL documentary records a public debate monitored by Norman Mailer (Ari Fliakos and Scott Shepherd) with some leading women feminists of the period, in the case of this production, featuring: Jill Johnson (Kate Valk), Germaine Greer (Maura Tierney) and Diana Trilling (Greg Mehrten). The documentary has been explored by the Wooster Group with an edited skew to feature Jill Johnson's participation - she being a stand-out Lesbian/poet/activist of the time. Ms Valks is supremely inspired and makes of her opportunity an indelibly witty and 'possessed' impression. Maura Tierney, not attempting to look at all like Germaine Greer, is also formidable in capturing the essence of the young Greer in her first public appearance in the United States (as part of a tour promoting her book THE FEMALE EUNUCH), while Greg Mehriten captures the spirit and strength - dignity - of the New York Literary and Cultural critic, DianaTrilling. Counter-balancing this formidable intellectual and feisty energy, Norman Mailer - author, playwright, journalist, political activist: he had recently published a book, THE PRISONER OF SEX - is represented by two men: Ari Fliakos and Scott Shepherd - the patriarchal male in all of his misogynist arrogance hopelessly flailing in his intellectual elitism to keep abreast, afloat, with all that unleashes about him.

This production is only 65 minutes long and does require close attention from the start. I had an absolutely thrilling, stimulating time in the theatre. My companion and I were so excited to be provoked by a production on stage that one felt was so much 'smarter' than ourselves. Afterwards, standing in the foyer discussing and debating with other members of the audience, and days later, having the ideas and outrages simmering, bubbling, sitting deeply in our consciousness, and festering an activist frustration within oneself in January, 2018 was/is a great reward.

The Town Hall Affair took place in 1971 and 46 years later in 2018, one feels that the conversation that these women and Norman Mailer were having then, is nearly exactly the same conversation we are having, vigorously, today. Not much has essentially changed, it seems. Food for thought. The elitism, the entitlement, the arrogance of the 'predatory' verbal intellectual stance of Norman Mailer represents the position of men of power today who refuse to acknowledge that their view, stance is inequitable and in need of radical change, comes through with overwhelming and shameful force. The present 'revolution' of women and their shout for change and equality could not be more encouraging. The pulse that The Wooster Group have tapped is entirely prescient in its significant presence at the Sydney Festival.

Whatever the experimental forms employed in this presentation by the Wooster Group it was of little interest (perhaps, because the methods are very familiar in contemporary Sydney Theatre e.g. Roslyn Oades' work, Version 1.0), for, it is the content that strikes one, and illuminates this performance as a special experience. In the pre-occupied self referencing of so many artists' work that we get to see onstage in Sydney it was a breath of fresh air to be made to attend to something in the theatre bigger than the artist and to be provoked with issues of great importance for the cultural, sociological development of our world.

A highlight.
Posted by Editor at 9:30 PM