There Will Be A Climax 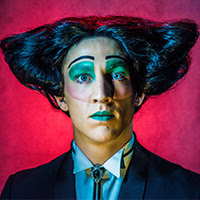 Red Line Productions in association with the National Institute of Dramatic Art (NIDA) presents, THERE WILL BE A CLIMAX, by Alexander Berlage and The Company, at the Old Fitz Theatre, Cathedral St, Woolloomooloo. 9th January - 3rd February.

THERE WILL BE A CLIMAX, began as part of the 2016 Directors and Designers Graduating Productions at the National Institute of Dramatic Art, written (devised?) by Alexander Berlage - also the Director - and The Company of performers: Toby Blome, Oliver Crump, Duncan Ragg, Geneva Schofield, Alex Stylianou and Contessa Treffone.

On entering the theatre we meet a red curtain which, when the performance begins, retracts to reveal a gold backcloth, surrounding a clockwise turning revolve, upon which the six actors, dressed in black suits and white shirts with different types of tie, and a half face mask with different colours of eye-shadow and lip-stick, and an individual 'glorious looking' black wig concoction of absurd tortures on their heads, choreographically dancing to the Dead and Alive's YOU SPIN ME ROUND.

It is some feat to dance and move and interact with each other, and an ultimate avalanche of props, whilst the revolve - wheel - earth?- keeps spinning. The Company of actors have each developed a 'clown' persona (one of the actors, Duncan Ragg has studied at L'Ecole Phillipe Gaulier) and using only gibberish for nearly 60 minutes sustain a performance that might bring you to helpless laughter or great perturbation. You might find a 'clown' that becomes your favourite ("Oh, he is so cute"), you might find one that irritates you, or, one that just gives you the creeps - clown-phobia! In the end, or, during, you might be on board for it to never stop, and as the performing platform begins to revolve in the opposite direction you might cheer or otherwise cry out: "Stop the World I want to Get Off".

The show looks great with Set and Costumes by Nicholas Fry, with those outrageous wigs by Luke D'Alessandro. Mr Berlage has established himself as a Lighting Designer of some skill and this show demonstrates that further. (This is his Directorial task (Graduating task?) as well.)The Sound Design, by Katelyn Shaw, is quirky and serves the Director and the choreographic efforts of Toby Derrick well.

Just what is THERE WILL BE A CLIMAX about? Discuss in the bar afterwards, perhaps. Is it just a mindless escapade in ridiculousness? Have these young creators still the ebullient optimism of youth and not yet have any agenda except fun, fun, fun, silly, silly, silly? Are the world events just passing them by whilst they sit in a state of clownish oblivion? That is alright, I suspect. I, too, remember my carefree provincial life as an excited young actor. Nothing wrong with that but this show is so beautifully supported by so much eccentric talent, that one, while one was watching, just wished for more muscularity (intellectual muscularity) in the opportunity that they were indulging in (or, if they were saying anything, that it was less opaque?) The night before I had seen the Wooster Group in THE TOWN HALL AFFAIR, and had had such a brilliant time, both as an entertainment and intellectual provocation, that I really was in the mood for something more substantial. Too much to ask? Perhaps, perhaps. But then after FAG/STAG the other night at the SBW Stables for Griffin, I began to wonder just what does the Australian artist think about, outside their personal realms.

Last year at the Old 505 we saw a performance by a Mexican Clown, Gabriela Munoz, in similar eccentric garb and make up, speaking only in gibberish, and like this company interacting with the audience. It was called PERHAPS, PERHAPS ... QUIZAS that not only had a persona of much humour but also a persona of tender passion and human fragility that all of us could absorb and leave the theatre not only entertained but 'plugged' into the vibrations of what it is to be a human in the spinning travails of the planet earth. Too, being at the Old Fitz in this tiny space, I recalled the performances of Lindsay Kemp's Company in the tiny space of Downstairs Belvoir (besides the spectaculars at the Valhalla Theatre in Glebe, before, that) and the affect that they had on us with their personas - sobering, intriguing and spectacular - world shattering.

THERE WILL BE A CLIMAX, will divide your audience in response, but if you are positive to the event it will be a delight of much fun, if, otherwise, it could be a long time spent in the theatre waiting for something to happen, for that promised climax of the title to happen. Or is that its point? There isn't one.
Posted by Editor at 8:09 AM