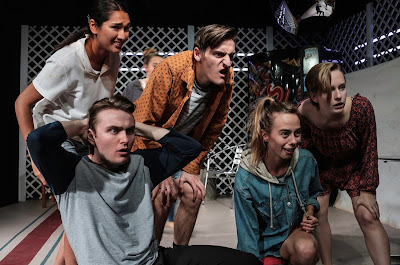 Fraser Corfield, the Artistic Director of the ATYP tells us in the introduction to the published texts of this play program:


Australian Theatre for Young People (ATYP), the national youth theatre company, is committed to commissioning and developing plays that young people can perform. ... INTERSECTION 2018 is a collection of short stories for the stage written by some of Australia's leading young playwrights. ... INTERSECTION is an annual program, each year offering new characters, situations and scenes.

Following on from a selection of writers a week long retreat helps focus and develop the work: seven-minute scenes for 17-year-old- actors. Actors are found, a team of creatives come on board and together they prepare a showcase of the new work.

Rachel Chant has taken up the Directorial reins to bring the 11 pieces of writing into a cohesive world for the audience, with the image of the CHRYSALIS - where the characters are evolving their 'adult selves' before bursting fully formed into the world - with a team of Creatives: Set and Costume Design, Tyler Ray Hawkins; Lighting Designer, Emma Lockhart-Wilson and Sound Designer, Brett Smith, and has deployed and guided eight actors to inhabiting the characters and creating place to deliver event, action or theme.

All of the writing is interesting and all of the actors give a shape to the characters and situation that will differently impress the audience at different levels of communication with their 'juvenile', developing skills. We all will have our different favourites.

It was a recent treat of a very high order to engage with one of Australia's great actors, Noni Hazlehurst, in a one-woman play written for her by Daniel Keene called MOTHER. It was an example of the wonderful 'marrying' of the writer's talent with an actor. The words on the page sprang to life with the embodied and insightful maturity of the actor and her 'learned' skills, so that the writer and actor's work became a seamless intertwine to take the audience into a complex and compassionate experience (Directed by Mat Scholten) - a word-by-word, moment-by-moment revelatory thrall.

One hopes that these young actors, who, generally, have enormous potential are able to witness Ms Hazlehurst's artistry. To learn from the objective example of a 'master' using the language that her writer has given her to create character and story to reveal 'theme'. Most of these actors in INTERSECTION 2018: CHRYSALIS gave nervous 'performances' of thrilled impressions of the characters that they were playing, mostly, only, an energetic gist of the writers' creation and not necessarily a word-by-word revelation of evolving character or action-storytelling. Their excited energy tended to blur any clarifying internal detail for the audience to own and create together with them - the ideal objective of the actor's craft. They tended to be 'Performing' and, so, not reaching the appearance of 'being'.

For my experience, Cait Burley, in the solo work, #NoFilter, by Pippa Ellams, was most effective in moving me into the world of the character and her dilemma. Jeremi Campese and Ben Tarlinton, as Isa and Tim, in Joseph Brown's Lights on the Water, too, create a delicate interaction of character and situation, while Clare Taylor as Bec in Alexander Lee-Rekers' The Witch in the Window, makes an impression of torment and guilt.

INTERSECTION 2018: CHRYSALIS, works as a collaborative pursuit to developing the skills of young writers by having their writing brought to living form on the stage to communicate with an audience to help us see and hear the concerns of the 17-year-old's of 2018. Each audience member will have their favourite successes as I have had.
Posted by Kevin Jackson at 1:14 PM