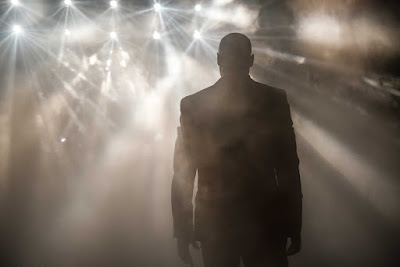 VISITING HOURS, by Australian team John Harrison, Constantine Costi and Michael Costi is receiving a second life after a successful debut for VIVID in 2016. It is an art installation, site specific work that takes us to an off-the-grid medical facility where a Doctor is performing a new operation.

We, an intimate group of 20, arrive at the top of William St - the famous Coca Cola sign gleaming across the road - at the entrance to the DIVE BAR, where we are met and given 'triage' - a coloured and number coded wrist band - and ultimately are escorted into an induction space where a 'Lynchian' behaved nurse medicates us (and herself) to begin a journey through the locations and events of this 'hospital'.

During the course of some 75 minutes, or so, we meet a jazz quartet and singer singing songs with themes of dreams. Some of us are swabbed, eye tested and mouth cleared, all are given face-masks, and ultimately meet a patient who has had a procedure that has 'youthened' her - she had the procedure in the '80' s and though it is now 2018, looks spunky in her early 30's still - one has expectative thrills reminiscent of imagining mad Doctor Moreau's experiments.

Some of us - those with the red band - take a trip in an Hawaiian themed elevator, up to a room where we find the others waiting and are taken through a series of medical procedures and tests given by a staff that seem to, accumulatively, medicate themselves into a kind of 'oblivion' crisis. We are ushered from that 'debris' into an operating theatre to witness a procedure which ends when the spirit of the patient rises from the gurney to guide us into a gloss walled room, densely 'hazed' and lit in the 'mists of time and space' where we meet a mysterious figure that holds a white lighted globe and speaks portentously of, I think, spiritual profundities.

Next, we find ourselves in a medical janitor's space and are 'rescued' and released back into our own reality, which happens to be the Roof Top Bar of the Kings Cross Hotel, with spectacular views on a warm summer night, and drinks.

VISITING HOURS has a spectacular visual style Designed handsomely, by Anna Gardiner, and lit with all the suggestive tension packed splendour needed to help create an intriguing atmosphere, by Benjamin Brockman. Directed by John Harrison and Michael Dean it moves seamlessly and safely through all of its locations and creates vignettes of activity in each of the spaces with a wonderfully drilled and empathetically committed group of actors of some 22.

From a state of wonder at the aesthetic of the Design and the focus of the actors, one, however, began to feel time pall, beginning essentially in the operating theatre sequence, and losing us completely with the existential attempt at universal profundity in the beautiful long misted room. One longed for some proper drama, theme or meaning. One began to wish for something, like the gothics of an American Horror Story type vibe, or the ruthless satire of the 1971 Paddy Chayefsky film THE HOSPITAL, starring George C. Scott and Diana Rigg. There is no real dramatic action thread comprehensively going-on to keep us present after the initial admiration of the spaces.

Ultimately, VISITING HOURS is a triumph of STYLE over SUBSTANCE.

One enters the Roof Top Bar with an impression of design and execution excellence that is empty of any rhyme or real reason for all that effort. The writers need to re-examine what they were wanting to say. Surface is not enough, really.

Still, the Production is in the installation 'form' of a theatrical engagement, that for the uninitiated could be very exciting to participate in.