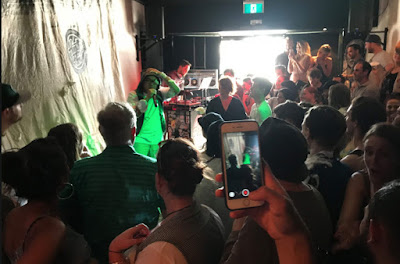 SHAKESPEARE DANCE PARTY, was a rapper's gig incorporating the mysterious beats of DJ Jimmy New, using a Shakespearean monologue, taken in a faux competition between some 16 or so artists. It was an experiment in taking Shakespeare back to the 'rabble', hosted by MC Jag. There were 4 heats, of micro-phoned Shakespearean speech dictated at rapper speed from the DJ, interrupted for more drinks, with an ultimate play-off between two crowd selected competitors. There was a winner, claimed by the noise of the rabble in rsponse !

And rabble, humoured with those autumnal afternoon drinks, and mostly friends of the performers, it was. The audience provided with 'cream pies' (the artillery) to barrage the performers in appreciation or otherwise, created a Mob rule of good humour and generous support (one reflected, amusedly, on the energy in the space in contrast to one's last visit to the Bell Shakespeare, as one wiped away the cream from the shoulder, hair, nose etc.)

The urge for this 'mad' event came from the posing of some serious questions from Curly, of the Leftovers Collective: What is True acting? Is it Art or is it Competition? Is the actor disposable? Can anyone act? No answers surfaced during a hi-jacked Q & A session that followed, if even, seriously, the questions were ever heard.

Yes, Virginia, there is a rebel heat out there in the arts, and this collective is a regular provocateur on the Sydney scene.
Posted by Editor at 1:39 PM