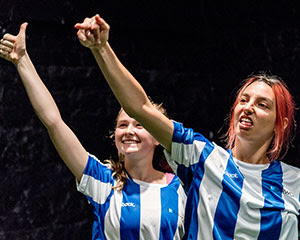 THE WOLVES is a first play by American, Sarah DeLappe, written in 2016, a finalist for the 2017 Pulitzer Prize.

THE WOLVES are a female teenaged indoor soccer team. We meet nine of them them over several pre-game warm-up sessions, exercising like crazy, not only their bodies, but, also, their tongues that can, at any one time, manage to negotiate conversation about their studies concerning the Khymer Rouge, to their 'history' with tampons, abortions, and facts such as the new girl lives in a yoghurt (meaning yurt)! The conversations are overlapped and shared equally by most of the girls and what surfaces is a gradual pattern of verbal indirection that undramatically, slowly, reveals, the idiosyncrasies of each, as they move forward in time from their 'girlishness' to the cusp of maturity, signalled by the breathless anticipation of being 'scouted' - separated - for a college team. THE WOLVES is about a team and only one of the girls is named. We come to recognise them as individuals distinguished otherwise only by their player's number.

Ms DeLappe creates a story in an environment that is physically energetic, with dynamic content shifts from the very personal, that can be both hurtful and endearing, to the altruisms of their world's social studies. The robust energy of these soccer players is captured with an uncanny accuracy, in a tight 'musical' writing construct by Ms DeLappe that requires an orchestration of the voices and subtle shaping of the material, supported by an 'invisible' stage choreography for dramatic focus, from the Director.

Jessica Arthur, the Director has found a soccer drill for each of the scenes that has the effect of dance routines - pleasing to the eye. What she hasn't yet managed is the harnessing - disciplining - of the energies of some of her young cast that tend, as storytellers, to obviously indicate the dramatic 'turning points' of their responsibilities, not trusting that the writer is clearly in control and is expert in revealing those changes without the over earnest need for the actor to demonstrate/indicate them for the audience. There is a pattern of excited robust acting (by some of the actors) that breaks the skilful subtlety of the writing and takes us out of the absorbing belief in the 'reality' to have us register, unconsciously or not, that we are in a theatre, watching a play. Too, the necessary 'choral 'conducting' of the voices, by the Director, has not yet found a seamless harmonic utterance for the ensemble of these actors - they sound, mostly, like individual instruments, not an egoless orchestra.

As a result, in this production, the play loses its accumulative impact, for much like an Annie Baker play (also, a contemporary American writer) - say, THE FLICK or JOHN - it is in the undramatic, unremarkable, untheatrical repetition of the verbal and physical action that the power of the life force of these young women can be - is - perceived. Much like a Chekhov play, THE WOLVES, should appear to be about nothing much until it is all told. Some of Ms Arthur's actors haven't the discipline to trust their writer and pre-empt the whole by overplaying the parts - their parts.

However, this production is full of explosive energy both individually and collectively - it is hard to resist the generalised atmosphere engendered by this company in such a small space as the Old Fitz, and Designer, Maya Keys (Set and Costume), along with Veronique Benett with her Lighting Design, have created an exciting space, that, in the scene black-outs is enhanced by the propelling Sound Design from Clemence Williams.

This ensemble is not all in the same play, Ms DeLappe's refined play. The most interesting of the actors are the instincts of Brenna Harding, as #24, the team captain, negotiating her way through the petty politics of her charges and the off-stage coach, dealing delicately with a growing personal knowledge of a particular sensibility; Nikita Waldron, #46, the new girl from the yurt, with a talent for the sport, and Cece Peters, #7, the ambitious but frustrated team member buffeted early in life by 'injury' of both a physical and psychological nature.

This production of THE WOLVES is not as good as the playwriting but is worth the visit.
Posted by Editor at 2:52 PM