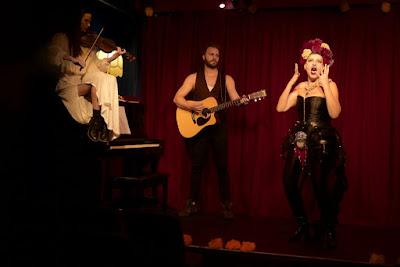 CARMEN Live or Dead is a Music/Theatre piece conceived by Greg Harwood and Natalie Gamsu and has a Book by Greg Harwood, with Music and Lyrics, mostly, by iOTA.

The work introduces us to Carmen Frida Leon Davidovich (Natalie Gamsu), the (fictional) love child of Frida Kahlo and Leon Trotsky. It is on the last day of her life and Carmen takes us on a reflective journey of remembered discovery - an orphan, a refugee, an hermaphrodite, a human. Beginning in Mexico, landing somehow in Morocco, ending in, believe it, or not, in Woy Woy!

In a beautifully designed canvas tent of receding proscenium, hand painted with many images, including that of Frida and Leon, and a hand-'dropped' curtain onto which images are projected (Set Design, Dann Barber), Carmen, in some deliciously provocative costume (Costume Design, by Shauna Lovisetto), aided and abetted by two musical helpers: Andrew Kroenert (guitar and piano) and Stefanie Jones (violin and svelte physicalities) coaxes us through a history.

The text is best in its zingy one-liner sketch comedy exchanges, between the three of the players and the interactions with the audience (clumsily staged by Director, Shaun Rennie), but falls drastically short on clarity of plot narrative and in its interest in sustaining content - it was a bit of a tease to have a 'chat' with the descript by Carmen as to her preference to be called 'hermaphrodite' or 'intersex' - this is a 'modern', 'contemporary' content, I thought, but, alas, it went not far, and, nor did much other content except in the usual areas in a sentimental, 'maudlin', classic indulgence about sex and death!!

Now, I am not sure, whether this underwhelming experience was the consequence of the writing or the lack of heft from Ms Gamsu - who is, in deed, very proficient - but seemed to have only half the wattage required to really pull this wildly bizarre character/set of ideas off (one wondered what the wattage of a Bette Midler might have done with this evening in the theatre). Definitely, the wattage on the the Hayes Theatre stage was not enough to distract from what CARMEN Live or Dead, at the moment, lacks. As it stood, this musical entertainment stood still.

As is mostly usual in Sydney of late, it was the Design, the Look, the 'Surface' of this theatre piece that was a runaway triumphant hit: The Set, Costume and Lighting Design (Benjamin Brockman), bravo. Not the book, not the music or lyrics, not the performances.