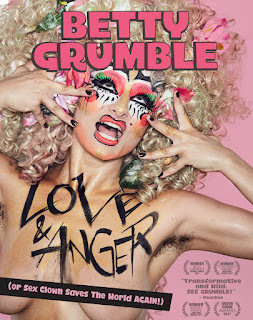 Griffin Theatre as part of the Bach Festival presents, LOVE AND ANGER, by Betty Grumble, in the SBW Theatre, Kings Cross 28th April.

LOVE AND ANGER, is vividly described in Griffin's publicity as a


Womanifesto, call to arms, and long hard kiss from surreal showgurl, obscene beauty queen and sex clown, Betty Grumble. Witness her ecosexually charged riot of dancing dissent, disco and deep push back-ery, where pleasure is a radical act and the body a bloody love letter. Prequel, sequel or freak-quel the head-spinning LOVE AND ANGER is a 'reclamation of the feminine spirit in all of its juices, jiggles and joy.


The last act of the Griffin Bach Festival, late night: 10pm (more like 10.20), is the spectacular underground artist that some of us have come to love and celebrate: Betty Grumble. It is a FULL House and some, pleasantly softened with the 'craft' beers and/or wines from the bar foyer, meet a crazily be-wigged and made-up woman/clown dressed in a nicely designed white flared skirt/suit with iterations of scribble dispersed all over it, pacing, and reading a book that, once we have all sardined-in, we are told is a copy of The SCUM Manifesto, written by Valerie Solanas, of 1968 (Ms Solanas also, shot Andy Warhol). This book is quoted throughout the performance:


'Life' in this 'society', being at best an utter bore, and no aspect of 'society' being at all relevant to women, there remains to civic-minded, responsible, thrill-seeking females only to overthrow the government, eliminate the money system, institute complete automation and eliminate the male sex.

The Lights go-down and the first image is that of Ms Grumble skirt-over-head revealing two large cartoon eyes and extravagant eye-lashes stuck to her bare arse, with her head between her knees and her hands manipulating her "pussy' to lip-sync to "You are beautiful. La-la-la-la. La-la-la-la." etc. Most of the show Ms Grumble gives naked. Absolutely, naked. Ms Grumble's nakedness is exquisite and is as comfortably disported and normalised as any costume you have ever seen. The performance is given with thoughtful integrity and construction of revelation of frustration and argument. Some highlights: There is a quasi strip sequence. (ironically, I contemplated the 'historic' strip clubs of the Kings Cross precinct, objectifying women, not more than a few hundred yards away, then and now). Sometime later she smeared her lower body with brown 'shit' (probably nutella) and squeezed out a long piece of shit (modelling clay) which she gladwraped and handed to a member of the audience as a souvenir. She also smeared her vagina with red paint and stamped out many, many copies of it onto A4 paper and gave the 'art work' away to the enthusiasm of her audience. She remembers her mother in Kogarah and her pink bikini body building costume and dons it. She stands on her head, arms supporting her, her legs spread-eagled with a vase inserted into her vagina, into which a volunteer audience member places some flowers while she sings softly:

LOVE AND ANGER is a magnificent no-holds-barred political entertainment of huge intelligence and confrontation. Betty Grumble is, assuredly, full of LOVE for all humankind, no matter the gender identification, but carries a history as a 'human' that could only be expressed, too, with ANGER.

I wondered what this audience was making of this late night barrage. For those of us in the know it was more of what we admire. (Annie Sprinkle lives!) For the first-timers, some of them observantly comfortably bourgeois, I wondered what they were experiencing. This kind of theatre is around, to be seen in Sydney (and elsewhere), it just isn't ever, ever, seen on the 'main-stream' menu. Sydney mainstream needs to see more of it.

Betty Grumble has an agenda armed with an intelligence and a glorious set of physical skills to propel any audience to stratospheres of brain-tingling re-wiring and hopefully societal re-considering. Sitting with the Griffin Artistic and Administrative Staff at this single performance on the SBW Stables stage one can only reflect on the usual tepidness of the 'political activism' of this company and the Belvoir and Sydney Theatre Company's usual repertoire. Not all the work on the Griffin Stage (or any other stage) can be like this, but, maybe, one project in/of the season to come, will be. Could be. Should be.

The comfortable bourgeois de-construction, non-confrontation of the courageous Erdman and sociological critic Brecht in the Belvoir's adaptations of SAMI IN PARADISE  (nee, THE SUICIDE) or the Sydney Theatre Company's THE RESISTABLE RISE OF ARTURO UI was, I felt, so offensive to the reputation of the original writers that I, urgently, wanted to check both their graves to see how many times they had turned in an attempt to object to what was purported to be their literary stand/observation of the world they knew. The Belvoir and STC Australian 21st Century offers were feeble in their theatrical impact.

Here is an artist, Betty Grumble, who says what it is and puts all of her self on the line to say, unapologetically, like what it is - take it or lump it! Told, fearlessly, with LOVE AND ANGER.

Bravo, for the curation of this amazing important artist and work.

The Bach Festival seemed to be a great success. I picked and chose what I wanted to see and did well. The audiences I were with were young and enthusiastic. The theatre is ALIVE.
Posted by Editor at 9:45 PM