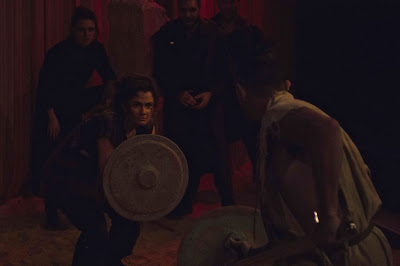 Secret House presents TROILUS AND CRESSIDA, by William Shakespeare, at The Depot Theatre, Marrickville. 9th May - 19th May.

TROILUS AND CRESSIDA, by William Shakespeare, is notoriously known as a 'problem' play and extremely difficult to bring to life. It is very rarely attempted. I last remembering seeing this play in a Bell Shakespeare production, in the Olympic Games Year of 2000, Directed by Michael Bogdanov. So, when announced in the present season of play at The Depot Theatre one's curiosity was triggered.

Of the great titled lovers in Shakespeare's repertoire: ROMEO AND JULIET, ANTONY AND CLEOPATRA, TROILUS AND CRESSIDA is the most unknown. Though in the language of our culture, 'Troilus' has been handed down to us famed for his fidelity and 'Cressida' infamously for her unfaithfulness. It is foolish to be accused to be a Troilus and damnable to be a Cressida, it seems. How so? why so? one needs to familiarise oneself with this source - for it is almost Shakespeare's invention. Troilus makes only a cameo appearance in the ILLIAD, and Cressida is never mentioned. The best-known and most influential source here would have been Chaucer's poem TROILUS AND CRISEYDE for Shakespeare to take up.

This production from Secret House does not elucidate any more clearly this play and its pre-occupations  despite the valiant aspiration of its Director, Sean O'Riordan, who has faced 'the question of what to cut, what to re-write, what to leave for the Actor and Director to make understandable' and the admittance that 'there have been many changes, cuts and rewrites in order to bring this production to the audience tonight'. One leaves The Depot Theatre as much puzzled as one, possibly, was before entering it. It requires academic reading, perhaps, to begin to grasp its intentions.

It is in the genre of satire and the cynical tone of disillusionment about everything from sex to war that has urged scholars to regard this play as surprisingly 'modern' in its outlook, at the same time that it grounds itself in the action of one of Western civilisation's founding events, the Trojan War. The audience in the actions of this play is confronted with a tremendous loss of idealism, with a debased ideal. The loss is on two levels, political and personal, war and love. Nothing in this scenario is what we hoped and have believed in as a civilised person: love and war, romance and history proves to be ugly.

This large company, of 19 well-drilled actors, (N.B. There is gender blind casting) harnessed by Mr O'Riorodan in a robust concept - terrific Sound Design (not credited?) - Set and Costume Design, by Maya Keys; Lighting, by Mehran Mortezal, with a palpable discipline present, are admirable in their individual commitment, but do not have the sense of the play as a whole or what it might have to say in a refined, distilled clarity. It does not assist the production that not all the actors are on top of the skills necessary to illuminate the language of the play (vocal work).

Best work (it is relative) comes from Alec Ebert (Hector), Matthew Bartlett (Troilus), Charles Upton (Pandarus), Danen Young (Thersites), and Shan-Ree Tan (Ulysses), although they can do little, individually, to make this a comprehensive night in the theatre. But, then, not very many companies have had a way to find enlightenment for this play. The Bell Shakespeare was a memorable frustration and failure, I remember.

Then, this night in the theatre with Shakespeare's TROILUS AND CRESSIDA, can be and may be for the aficionado, of interest. No-one else much, except loyal family and friends. The choice of this play was a brave undertaking and it certainly piqued my interest to attend. This is a rare opportunity to ponder the play as it was meant to be seen: staged. Make of it what you can.

N.B. A new source for my preparatory reading has been SHAKESPEARE AFTER ALL, by Majorie Garber - Anchor Books - a division of Random House. 2005.
Posted by Editor at 6:44 PM