The Beginning of Nature

Merrigong Theatre Company present, THE BEGINNING OF NATURE, from The Australian Dance Theatre (ADT), in the IMB Theatre, at the Illawarra Performing Arts Centre, Wollongong. 28 -30 June.

I love going to Dance. No words to listen to - what a relief! No words mangled by skills under-prepared, by actors, who are, skills-wise, only half ready!!!!. (Take a deep breath, KJ.)

Last time I went down to Wollongong and the IPAC Theatres was to see LOST BOYS, the new Lachlan Philpott play, commissioned by Merrigong Theatre Company, and I noticed that the Australian Dance Theatre (ADT), from Adelaide, led by Garry Stewart, was giving some performances of a new work: THE BEGINNING OF NATURE. I have always regarded ADT as one of the more exciting contemporary dance companies in Australia and have always looked forward to seeing their work. Why ADT does not get into Sydney for performance is a mystery to me, as it is, I understand, a Dance Company held high in artistic repute - esteem - and is often sold out in the International scene as soon as it is announced that is coming - both in Europe and the Americas.

The opening performance was at 6.30pm, which meant I could catch a train from Sydney Central (4pm), and sit comfortably in one of the "Quiet Carriages", where I could read (I'm reading Colleen McCullough's first book: THE FIRST MAN IN ROME, in her seven volume MASTERS OF ROME series (of nearly 1,000 pages, each) - it has been highly recommended to me!), or have a 'nana'-sleep, or 'dream time', for an hour and half. On arrival, it is a short walk to the theatre to have some food in their restaurant, watch the performance, and catch a train (and read some more!), to be back at home just after 10pm. Bliss.

Garry Stewart in the program notes:


The work is based upon the rhythms in nature. These rhythms permeate all aspects of the material universe including day and night, the seasons, the tides, as well as flocking and swarming patterns of various species, the rhythmic patterns within the body and the patterns that constitute bodily morphologies. THE BEGINNING OF NATURE also situates humans as creatures. On a fundamental level, we exist inside of nature and are not outside and separate from it. 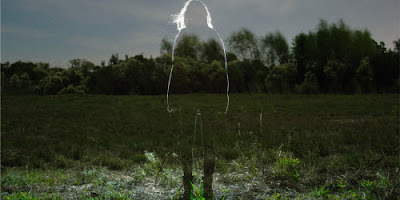 In a Lighting Design by Damien Cooper that features green and purply-blues, the dancers moving to a musical composition by Brendan Woithe (recorded by The Zephyr Quartet) with two live Singers: Heru Pinkasova and Karen Cummings, singing a libretto in Karuna, which is the Indigenous language of the Adelaide plains region where the company is based, with much of the music having subtle referencing, glimpses, of other Asian cultures connected, nearby, to our continent, to create (perhaps) the emergence, from the pool of primordial gloop, the organisms that evolved into the flora and fauna of our world over many, many millennia.

ADT is asking through the investigation and creating of a physical language for the dramaturgical narrative' of THE BEGINNING OF NATURE, its audiences to have a meditation on how we in an age of Global Warming can collaborate with Nature for environmental sustainability:


What does it mean to be human, in a period when destruction of the planet is rapidly redefining the laws of nature? Contemporary culture largely regards the natural world as objects to be bought and sold, rather than as an integrated, living, co-evolving whole. As humans, it seems as though we often forget that we are a part of nature, not apart from nature.

This company of dancers have a "stocky" muscularity, that, say, is in contrast to the relatively 'sleek' look of Rafael Bonachela's Sydney Dance Company (SDT) dancers, but, both, are staggeringly fit, and imbued with a stamina and access to unique expressive physical beauties that are almost 'freakish' in their manifestation and in their frighteningly fierce concentration. ADT has only nine dancers to sustain the nonstop choreography (70) minutes), which with Garry Stewart, the Artistic Director and Choreographer of ADT, have developed together to illustrate and narratively 'tell' the dramaturgy of THE BEGINNING OF NATURE, whereas the SDT has fifteen dancers to share the task of their artistic interests.

ADT has a choreographic energy that is low to the ground but sinuous in its patterning and athletic in its execution - tough, fierce and relentless. Concentrated. Added to the 'muscular' look these dancers in mode with the costuming by Davis Browne have constructed a 'feral' look where the make-up and wild-freedom of primitive hair choices become telling sign-posts for uncomfortability of contrast for its bourgeoise audience, at this 'modern' stage of evolution, sitting in their modes of comfortable 'disguise' in the theatre. From the forces of the beginnings of nature, before even consciousness of tribal groupings have saturated human behaviour, perhaps, we were once this: forces of 'blind', feral, primitive energies - with all the other life existences that wondrously take another path to become plants instead of animals - the accidents of evolutionary 'chemistry'.

"Is the dramaturgy of more importance than the choreography?" "Is the choreography of imagery too often repeated?" "If so, does that subtly undermine the impact of the work?" These are questions my companion and I ruminated on as we sat in our carriage, on our way home, with some dark chocolate and a rhubarb and pear muffin, which we shared.

This was a worthwhile effort to have made, to attend to a remarkable Australian Dance company in the regional but local theatre in Wollongong. Bad luck Sydney not to have joined us. Good luck to the Wollongong audience, I reckon. Its happening in Wollongong - where art and community commune, seriously.
Posted by Editor at 6:27 PM