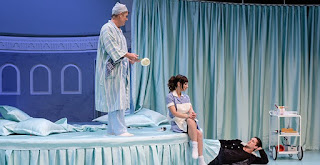 Moliere's LA MALADE IMAGINAIRE, retitled as THE HYPOCHONDRIAC, in a new Australian version by Hilary Bell.

Moliere is regarded as the greatest playwright in the French language. His acting company gained the favour of Louis XIV (The Sun King) and was protected from censorship and threat of closure as the Theatre du Roi (The King's Troupe), for Moliere had an unsparing eye to the major pillars of his community and revealed with scolding wit and accuracy its flaws and foibles. His plays were both celebrated and coruscated: TARTUFFE (1664), critiqued the hypocrisy of the Church; LE MISANTHROPE (1666) revealed the ridiculous behaviour of the wealthy; and LA MALADE IMAGINAIRE (1673) - THE HYPOCHONDRIAC, was an attack on the medical profession, doctors and pharmacists. Powerful people, revealed as 'pretenders', naturally, fulminated to have the work of Moliere banned.

Hilary Bell has adapted THE HYPOCHONDRIAC, says Ms Bell in her program notes:


There were two impulses behind the adaptation. The first was my desire to work on a comedy ... beneath THE HYPOCHONDRIAC's frivolity is a critique of a society obsessed with quick fixes. I refocused Moliere's concerns to encompass our co-dependent relationship with a pharmaceutical industry eager to overprescribe, to have us believe all our woes can be cured by a pill - and as has been recently exposed the cosy relationship that exists between certain drug companies and some doctors" ... The second impulse was to empower the female characters in the story, particularly the maid, Toinette, and the daughter, Angelique.

Ms. Bell tells us that she has "taken great liberties with this adaptation ... "

This production of this text had many problems and it was difficult to discern if it was the writing, the Direction or the acting. The design by Michael Hankin, who is one of the first rate artists practising in Sydney, is not a reflection of his usual high quality concept and execution - the space of the Eternity Theatre and the demands of the action of the play seems to have defeated him. Similarly, the always ingenious Lighting Design from Verity Hampson has, mostly, failed to produce her usual highly prized aesthetic contributions to the storytelling.

Ms Bell has created new Lyrics for this production's song interludes and they (probably) were lambasting the contemporary pharmaceutical industry. However, the Music by Phillip Johnston does not help clarify the text, and it seemed to me that the actors' preparation of the songs was lacking in unified vocal work. The lyrics were mostly incomprehensible and accompanied by a type of musical theatre presentation woefully uncoordinated - neither the word (clarifying) suiting the action or the action suiting (clarifying) the word - there was, interestingly, no choreographer or movement artist acknowledged in the program. It might account for the 'mess'.

The original Moliere company were exploring and breaking away from the Italian Commedia dell'arte, a style of acting that employed character mask, improvised text around a  loose narrative structure and physical characteristics to 'semaphore' to the audience the cliche of the personas of the story. Moliere's company rarely used mask, employed dialogue in Alexandrine verse structure (witty in its execution) and the physical life, apparently, was highly articulate and extremely skilful. Unfortunately, most of this Darlinghurst Theatre Company lacked the discipline or skill to create much of an impression, and the text lacked the witty word play.

It was staggering to watch Darren Gilshenan, in the principal role of Argan, making less than a comfortable contribution - for he is famous for his physical skill - and here is where my confusion of fault observation began. The famous opening monologue from the hypochondriac (imaginary invalid) was sadly astray - not funny, at all. Was it the writing or the performing? Mr Gilshenan never really recovered - he seemed to look vainly for a comic partner in each of his scenes, to develop his character and satire - for one cannot do it by oneself - but either the other actors or the actual staging by Director, Jo Turner, did not help to facilitate that spark of engaged interaction for he and, consequently, the play, failed to take confidently off.

The best work came from Jamie Oxenbould as the 'horrible' husband-to-be for Angelique: Doctor Thomas Diafoirus, outrageously comic in his consistent physical and vocal offers - a shining light. Mr Oxenbould is a consistent contributor of startling creation and technical skill in the Sydney theatrical scene.

Too, Gabriel Fancourt, playing a triple bill of characters: Cleante, Bonnefoy and Beralde, managed to hilariously skewer each type with a keen sense of employment of the traits of each, for satirical economy and accuracy - sometimes playing all three in the one scene!

Most of the other work from the other actors seemed to be 'at sea' - unsure on how to create and deliver. The Toinette of Lucia Mastrantone, a classic character type from the Moliere (and, by-the-way, the Rossini and Mozart) repertoire, a role, that would usually sit comfortably within the skills of this artist found no traction to score the comic laughter - of course, it requires the empathetic interplay of the other actors to ignite.

This Darlinghurst Theatre production of THE HYPOCHONDRIAC was not a good night in the theatre. It had all the ingredients for success: Moliere, Ms Bell, Mr Turner, and, mostly, actors who one expected to pull this material off with flair and ease. Perhaps, one went expecting too much.

One never sets out to fail. Every company begins and strives to succeed, but to be able to do so, as those who toil in this 'arena' know, it is more often a conspiracy of hard work and a rarity: a soupçon of good luck. The Moliere repertoire is a famous one but also infamous for its level of difficulty. A friend told me - she had seen the Comedie Francaise give Moliere's DON JUAN, in French - that it really requires the French actor to bring it to life, to demonstrate why Moliere's plays are so highly appreciated - they have, as performers, a certain 'je ne sais quoi', which we 'anglos' can't find, don't have, it seems, to give this material ballast.