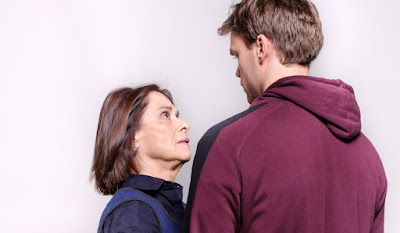 I am Directing a new Australian play at The Depot Theatre in Addison Rd. Marrickville. It previews Thursday night, 16th August, and opens on Friday, 17th August, playing Wednesday to Saturday, until September 1st.

MUM, ME and THE I.E.D. is a new Australian Play by James Balian and Roger Vickery. Produced by Collaborations Theatre Group.

All of these artists have been remarkable to work with.

It is inspired by a short story written by Roger Vickery based on the circumstances of an acquaintance of his. A mother, who has a son home from war.

Like Arthur Miller's stylistic conceit in his play, AFTER THE FALL, this play is told through the mind set of its principal character, in our case through Rob Harrison - a soldier (Medic) returned from several tours for the Australian Army in Afghanistan. Rob is struggling with injuries of the mind, what has been, in our modern times, identified as Post Traumatic Stress Disorder - PTSD. PTSD is an illness that is of the mind that when 'triggered' takes the individual out of their 'present' and back to the 'past', to the trauma(s) of origin. Beside the violence of the psyche which is often demonstratively distressing, the unpredictability of the triggers are a principal 'danger' to the person.

This new Australian play takes us into the mind of a particular soldier as he attempts to find a way to acquire an equilibrium to be able to function in his world. He is, like all of us, an unreliable narrator. Recalling and shuffling his 'triggers' that may make sense for himself of what has happened and what IS happening to him. We only have one voice in a conscious PTSD state talking to us. Most plays, that I have read around this issue, avoid the mention of PTSD. Mr Balian and Vickery's play bring it to vocal underlining - it is said out loud, often, it is not a mysterious unnamed illness. The audience will experience the result of psychological injury. It is a roller coaster horror story.

I have been concerned for some time about the relative lack of support for the mentally 'injured' soldier who has until recently been stigmatised as a 'malingerer' or 'pretender' of injury. The Australian Army, the Australian Federal Government seem, to me, to be publicly recalcitrant in its  belief in the scale of the issue of the soldiers who have returned with this 'injury'. A missing leg, arm, eye, any Physical evidence is regarded with some kind of undeniable respect and compensation - but that of the mind is suspicious and debatable. It is, probably, a serious BUDGET issue for the Government and Defence Force, and to deny, or under report the issue is a pragmatic action of immense expediency (and cruelty.)

It is urgent for me to bring onto the stage an Australian play that may be a conscious source to begin a more public consideration/conversation about this terrible problematic 'epidemic'. To give aid and compassionate respect to the veterans of our services.

There is a kind of poetic irony to be rehearsing and later, playing this work, in The Depot Theatre, in the grounds of the Addison Road Community Centre, which was once an army base. To enter the site one passes a Historical Guide Post/Sign that tells us of The Save Our Sons (SOS) organisation, set up by Nareen Hewett in the era of the Vietnam War, in June 1965, until, it finally ended in 1972. Said Ms Hewett

Too, we park our cars in what was probably the Parade Ground where the young 18-20 year old draftees and volunteers were inducted into the necessary automaton of Army Preparation and Service. Our Mary Ellen and our Captain Crowe, our Rob and Brownie, feel, spookily, the ghosts from the past been resurrected in Mr Balian and Vickery's play. We feel the responsibility of the conversation that this play in its pertinence is having.

I accepted to work on this play because I could not find a contemporary work that was Australian that could authentically speak to us today in 2018. THE MODERN INTERNATIONAL DEAD, by Damien Millar (2008), at the Griffin, and then THE LONG WAY HOME, by Daniel Keene (2014), at the Sydney Theatre Company, were the last Australian plays of quality that took me to a conscious space of social alarm. I was reading American and, especially, British plays that touched, investigated these themes. I needed to find an authentic Australian voice concerning the Australian issue.

PTSD is a modern term for what we, in my family called, "Shell Shock", that went back into the history of my family, back to my Great grandfather, a survivor of World War I, to my uncles and dad who survived the Kokoda Trail and the Navy, who behaved in most peculiar, moody, ways, especially on ANZAC DAY, when they seemed to lose the plot with their past comrades of war in drunken reunions. I thought they were just stupid men, and now in hindsight comprehend the horrors of war and the comradeship that was welded into their lives. The possibility that they were coping with shell shock, PTSD, never entered my head. It was the education I had had, my Primary School Social Studies classes, which never spoke about the real casualties of war and Empire making. It hid the permanent psychological damage: for the glories of Empire (British) were taught to us as achievements of greatness, which we excitedly celebrated with 'Cracker Night' on Empire Night (Later Commonwealth Night) around street bonfires! I need to assuage my ignorant guilt in my behaviour to my progenitors.

In reflection, I have come to appreciate the behaviour of Barney and Roo in the iconic Australian Play THE SUMMER OF THE SEVENTEENTH DOLL, better. I long to see a production of the Australian play, THE TOUCH OF SILK, written in 1928, by Betty Roland, concerning an Aussie soldier returning from the Fields of War in France, with a French wife (it is not only a PTSD story, but also a Refugee story!).

This is 2018, one hundred years since the end of the First World War, the supposed War to end all Wars. How many men, generationally, apparently, returned from war physically uninjured, but, are living daily in 'tortured' states? Hiding in rooms, the bush, the outback? In our research for this play we have shared the poetry of writers of war experience.

"FOREHEADS OF MEN HAVE BLED WHERE NO WOUNDS WERE" - Wilfred Owen, Poet and World War I veteran.

This is still the stigma of the contemporary PTSD veteran. There are no visible wounds. It causes shame, guilt and anger in these men and women.

I have encouraged the writers of MUM, ME and THE I.E.D. to expand the impact of PTSD into the ripple affects on the family and community at large. With Katie Pollock as their dramaturge, the writers, James Balian and Roger Vickery worked through some 18 drafts of the text before they brought it to me. We are now working on what I estimate be the 26th Draft of the writing - amazing resilient, generous writers. AMAZING! The actors of this production with their voluminous research and discoveries becoming the latest urging and opening of the finished/evolving script.

We have come to realise that all of us whether war veterans or not, in the pell mell of our present pursuits of living in the modern world, consciously or unconsciously are walking through, metaphorically, fields of IED's that can trigger in our psyche and take us to places of danger and erratic behaviour, at any time.

Grief we are told will pass, but in truth it sits within us permanently and may be triggered by the most trivial experience as the recent play and production, AIR, by Joanna Erskine, at The Old 505, taught us. We believe we have 'moved on' from that trauma but in reality it sits permanently within us hidden, locked away, until it is 'triggered', sometimes by a trivia, and strikes us as an IED of the mind.

Of course, I have always pointed out that the writers FREUD and JUNG wrote to help, through therapy, to solve life problems for patients in their clinics, and at the same time that STANISLAVKI wrote his books to solve artistic problems for actors - skills for acting. The modes to solve these problems, for life or art, are extremely similar. The actor is always searching his 'past' to solve his 'present' needs to channel entry points to find truths to create for an audience. It is where the artist searches for the 'triggers' to creative belief. The actor needs to be mentally 'healthy' to willingly take on the risk of injury. It is one of the dangerous "mysteries" of the craft of the actor - the necessary channeling of our personal and cultural traumas to be able to tell stories convincingly. It is why acting is HARD.

I hope you can join the conversation with us in the coming weeks.