The Widow Unplugged, or The Actor Deployed 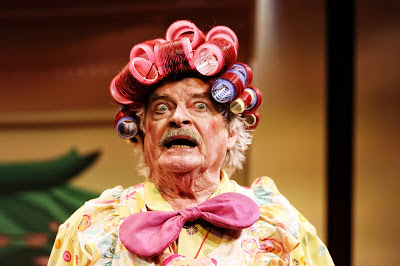 Reg Livermore in a one man show, written by him and starring him - what a tempting theatrical coup for the Ensemble Theatre: THE WIDOW UNPLUGGED, or THE ACTOR DEPLOYS.

Reg Livermore, is a major participant in Sydney's theatrical history. He was a founding player of the Ensemble Theatre, welcomed by Hayes Gordon, the creator and guiding light to that company, which is 60 years old next year.

My personal history with Mr Livermore goes back to witnessing a Revue at the old Phillip St Theatre, called A CUP OF TEA, A BEX AND A GOOD LIE DOWN, with Gloria Dawn and Ruth Cracknell. I saw him as part of the Tribe in HAIR. I remember that he was in a production of CABARET, as the Emcee, somewhere in Kensington, when I was an Acting student at NIDA - I so envied his gifts, I so wanted that role! One cannot forget his outrageous performance as King Herod in JESUS CHRIST SUPERSTAR, in the rescued Capitol Theatre, or his Frank N Furter in THE ROCKY HORROR SHOW, for Harry M. Miller. But best and most stunning of all was his devised shows for entrepreneur, Eric Dare, beginning with the first BETTY BLOKK-BUSTER FOLLIES, in April, 1975, at the Bijou Theatre, in Balmain, which was an iconoclastic outrage of character that shifted the psyche of Sydney audiences from the conventional to the vivid experience of 'the other'. The revolution in Sydney theatre had, ultimately, arrived. Sydney divided for and against, the outrage of Mr Livermore, you were in one camp or the other - it was a grand time to be alive and his theatre was electrifying. Betty Blokk-Buster became, for some of us, our Saint Joan, storming the barricades of convention. The "For's" won (for a while). Sydney was certainly never the same!

Mr Livermore did much else, writing musicals etc, retired to the Blue Mountains, was on a garden show on TV and seemed to be gracefully retiring, dare one say: 'dwindling away'. Then, last year I saw Mr Livermore give a terrific, astonishing, Alfred P. Doolittle, in MY FAIR LADY, back at the Capitol Theatre.

THE WIDOW UNPLUGGED, gives us an old actor called Arthur Kwik, who it seems is performing in a retirement home. Since his big time break as the Widow Twankey at the Tivoli Theatre in 1969, his career as been in a downward curve. He has fond memories and re-introduces us to that persona with stories, jokes that gradually decline into a pathetic hospital patient with, maybe, delusional flashes of a past life that he will never have again. Old age can be cruel.

This play has all the promise of some of the Old Times and Flashes of the Betty Blokk-buster era. Or, that is what I hoped? The performance dexterity, the flesh is so willing and able (still), but, except for a few jokes in the second half the writing, the content of the show, has none of the contemporary chutzpah and unsparing eye for social satire and confrontation that rattled his audience in the late seventies and turned me Mr Livermore into a Star. THE WIDOW UNPLUGGED, or THE ACTOR DEPLOYS, is not going to cause a revolution. It feels out-of-date, way off the pulse of the zeitgeist of 2018. It reaches for sentimentality, ultimately, and is a disappointment, for the reveal of Mr Kwik's true state was intuited by most of us many, many minutes (hours) before.

Director, Mark Kilmurry, has created with Designer, Charles Davis, a versatile setting with the nostalgic echoes of theatre gone-by - inspired by the gentle possibility of 'the swish of the curtain(s) - inside a sterile hospital space of pragmatic needs. The material itself yearns for a time of Music Hall parody and comedy - the jokes of the Widow Twankey, things of a tradition, now, mostly, sound and feel inappropriate (sometimes, in the present 'political correctness' time, even offensive) - and it does make for an uncomfortable sitting, but not in the same daring and culturally confronting manner that Betty dealt-out.

Excitement could not be roused to match my expectation. I hope this is not the last time I can see the extraordinary theatrical gifts of Mr Livermore - and I hope the material is equal to his gifts.

One wished that the night was more contemporaneously astringent.
It wasn't.
One hoped that it was not going to become maudlin in tone.
It did.
Posted by Editor at 9:20 AM