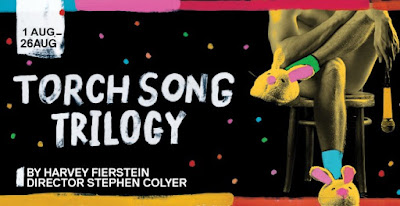 This production of the 1981 TORCH SONG TRILOGY at the Eternity Theatre is the fourth production of this play that I have seen. The first with Harvey Fierstein in New York, the next with Tony Sheldon at the Seymour Centre, in 1984. The last was in 2013. That production was led by Stephen Colyer as Director and starred Simon Corfield, as Arnold, featuring the live musical support of Phil Scott - and all three are the leaders of this new manifestation of the play.

TORCH SONG TRILOGY is made up of a three play omnibus: THE INTERNATIONAL STUD, FUGUE IN A NURSERY and WIDOWS AND CHILDREN FIRST, and illustrates some episodes in the life of Arnold Beckoff - a Jewish New York sometime drag queen with a penchant for the agonies (and beauties) of the classic torch song repertoire. In an environment of the Gay world, prior to the Aids epidemic, Arnold represents an unusual, uncommon identity of the 1970s who 'wants a special someone to create a family with and raise a child - essentially the life his parents had.' In 2018, says Director Stephen Colyer:


In the aftermath of marriage equality (2017), Arnold's example of resisting bigotry and being proud of his life seems more relevant than ever.

The war for the valuing of sexual equality may have been won for now, but, the battles of descrimination over what has become a revolution against the traditions of the sexual binary with the admittance of a 'fluid' sexuality continues fiercely in some sectors of the community.

Conceptually this production has been expanded with a 'package' of cabaret snippets of some famous torch songs. And it is cast cast with some of the young stellar of the Sydney Musical Theatre scene: Hilary Cole - playing Laurel (CARRIE, MURIEL'S WEDDING), Tim Draxl - playing Ed (ONLY HEAVEN KNOWS, THE SOUND OF MUSIC), Stephen Madsen - playing Alan (HEATHERS, MURIEL'S WEDDING) and Imraan Daniels - playing David (POPSTARS), accompanied by Phil Scott on a baby grand in the upstage alcove of the Set Design by Imogen Ross. Not only can these artists 'torch' the selected tunes with empathetic ownership they, also, have the third string of the Musical Theatre Actor - the ability to act. These 'song-birds' support Simon Corfield, as Arnold, and welcome Kate Raison as Ma Becker, in the third play with seamless conviction.

The tone of this production is one of a steady reality, often eschewing the Broadway brassiness of the comic potential - I noticed it, for instance, in the fine Design detail of the rabbit thematics of Arnold, tea pots etc, and especially, in this production's choice of the 'rabbit' slippers which are sedately elegant and relatively invisible - there is no gaudy gay visual cartoon joke in the Eternity Playhouse that I remember being on the Broadway stage in the Little Theatre - it is straight blandness, white mesh with white pom-poms.

This deliberate approach to tone pays off in the cumulative affect of the long evening in the theatre - some 225 minutes which included two intervals. The approach does not help the first play, THE INTERNATIONAL STUD, which proves to be fairly 'rickety" - dated - in its point and style (I don't think in modern times it is salvageable), and just survives in the thinly observed - written - second play, FUGUE IN A NURSERY, ( because of some theatrical invention, from these artists, in the staging), but scores a Bull's Eye in the last. The 'battle' between son and mother in WIDOWS AND CHILDREN FIRST is not just a family principle divide but a socially political generational division, devastating and cruel, ignorant, in its individual cries from the heart. As the evening wore on, one was drawn in, becoming more involved with the (dodgy) dramaturgy of the trilogy, the sensibility of the aims of this production team.

All of the company are terrific in their tasks and fill the relative shallowness of character with some imagined brio. Tim Draxl is especially sophisticated in his imaginative invention, while Kate Raison plays with scorching conviction, whilst balancing an unrelentable conviction of life values, against, with, the Jewish comic humour of the familiar New Yorkian stage invention (think Neil Simon, Woody Allen), that one shudders at the trenchant ignorance of the mainstream in Ma's attitude to 'the other', even if it is her own flesh and blood, with some sense of the guilt of appreciating the shocking wit and laughing.

This is Simon Corfield's second go at Arnold and he inhabits this character with endearing and convincing veracity with a detail of offers that are telling in their vocal, physical and emotional identifications - the years-long 'marinating' of the essences of the character (5 years for goodness sake) are present for all to see. One believes and gives empathy to this extraordinary man and his needs.

Although, Mr Corfield seems to have adopted a vocal characteristic for Arnold - maybe, attempting a craft gesture to 'honour' the infamous throaty-hoarse sound of the originator of the role - Harvey Fierstein - and in the larger scaled Design of this production in the Eternity Theatre is, relatively, weak in consistent vocal communication. As a result the necessary central drive of the 'big' personality of Arnold is under delivered and prevents this production from completely 'taking off'. The performance has heart but not the required volume of chutzpah of affect. This was not observable the last time I saw Mr Cornfield in this play in the smaller Hayes Theatre space, a few years ago.

Mr Colyer has brought a complex Set Design for each of the plays with Imogen Ross and its details are many, and as I stayed in the theatre during the second interval and watched the BIG change emerge as the cast and crew put it up together, I was mightily admiring of it. The Costume Designs are neat and pertinent for the stylistic conceits of the overall concept of the production. While Bejamin Brockman creates Lighting pictures that enhance the production glowingly.

At 225 minutes one was certainly given 'quantity' for money (only $44.00 concession) and one was won over gradually to the 'quality' of the experience, even if one had qualms about the consistency of the writing qualities. The 'parts' cannot bear too close an analysis but one surrenders to the 'whole'. However, I don't believe I need to ever see this play again.

If you've never seen TORCH SONG TRILOGY you'll not see it more lovingly made than with this production.
Posted by Editor at 9:13 AM