A Double Bill: The Intervention; and Good, Die Young 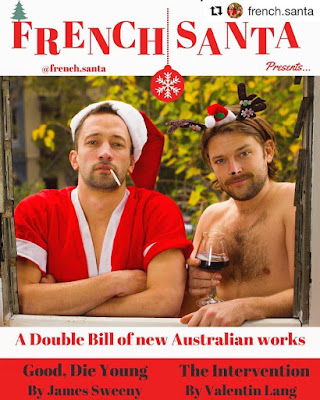 THE INTERVENTION, by Valentin Lang and GOOD, DIE YOUNG, by James Sweeny, are two new Australian one act plays. They are part of the Sydney Fringe Festival.

In THE INTERVENTION, three young people, a woman  (Mary) and two young men (Steve and Joe) are in a share house and have found their lives going nowhere and, maybe, are dangerously overwhelmed by a dependency on alcohol and recreational drugs. They try an intervention. One of them dies - drink-driving - and the other two commiserate on their way to the funeral with more drinking. There is, as well, a vacuous creative artist/singer (Anthea), that serves as a catalyst to the events of the play scenario.

The writer, Valentin Young, has an observational accuracy to the comic/drama of these characters and their plight, and in a non-interrogatory way simply presents the situation without judgment. We are left with the experience of these four young people to make of it what one will. Lloyd Allison-Young has Directed his company with an approach to character that varies from straight realism to melodrama to a self aware comic comment on character and situation. It is in the inconsistency of the acting styles amongst the actors that causes one to be never sure of the tenor/tone of the point-of-view of the production. Is this a piss/take or a soulful reality check? Are we meant to ruefully observe this as a mirror of contemporary living amongst a certain profile of young Australians? Should we find it tragic? Pathetic? or, ridiculously, accurate? stupidly sad? Hmmm?

Damien Strouthos Directs the second play, GOOD, DIE YOUNG, by James Sweeny (who also plays a leading role). It begins with a young man (Alex) declaring that he and his 'Company' have developed a way for a digital tattoo to be inserted into our body system that will make one AMORTAL - the ability to 'conquer' all disease and ageing. He has voluntarily partaken in the process. He is 28 and that will be the age he will always be - he will avoid death, unless there is an accident or a decision to suicide. He looks forward to live into his hundreds, he says. He has a casual sex-partner (Jane) who is simply mortal. She is vulnerable to disease, ageing and consequent death. He tells her of his physical status. He offers her, entrepreneurially, the same opportunity. She is appalled at the fiscal cost - and protests that this 'technical' intervention is only for the rich. She declines. She procreates a daughter with him. The mother  is diagnosed with an inoperable cancer. The daughter, (Poppy) in a late scene, is preparing for her first teen-age date. He is, still, physically only 28. She, the mother, is ageing, dying.

Mr Sweeny provides an intriguing premise for a conversation in the theatre.

We believe that we have found ways to control the world around-outside us, but now with the twin revolutions of infotech and biotech, it seems, we could restructure not just economies and societies but our very body and minds - we could gain control of the world inside us, and be able to engineer and manufacture life. This is one of the concerns in Yuval Noah Harari's latest book, 21 LESSONS FOR THE 21ST CENTURY [1]:


We will learn how to design brains, extend lives, and kill thoughts at our discretion. Nobody knows what the consequences will be. ... It will be easier to redirect the flow of our minds than to divine what it will do to our personal psychology or to our social systems.


Mr Sweeny, with his play, tantalised me with the prospect of an exposition and discussion concerning a most urgent present Social crisis, but, deflects to concern us in a rather too domestic, romantic dilemma between a man and a woman, than an interrogation of the discovery and choice that the 'hero' of this story has become part of. Things, such as, the ethics concerning the power to manipulate the world inside us and reshape ourselves. Asking more interrogatively, are the engineers, entrepreneurs and politicians aware of the political and social implications of their decisions. Investigating the consequence of this Technological Disruption inside us. And, as we are experiencing the results of our species' Technological Disruption on the ecosystem of the world outside us, believing that we were the Masters of Universe, what pause might we give to this 'hero's' new Biotech advance, as he practices a new role as Homo Deus - being a God-like being?

None of these questions concern Mr Sweeny's preoccupation. Tom Stoppard famous for his intellectual playwriting interrogations and human observation was 29 when he wrote ROSENCRANTZ AND GUILDENSTERN ARE DEAD. I am not sure of the age of these two new playwrights. But, both of these plays by these two young writers are encouraging to witness for their  grasp of the literary playform and character. I wished that the concerns were not quite so soppily immersed in youthful angst - sex, drugs - and more visionary in putting their skills to the discussion of more philosophic profundities about the incidents of life that their characters are immersed in. Maybe, with more life experience they will move into that territory. I have especial hopes of Mr Sweeny who 'tricked' me with his play premise that there was going to be a possibility of a contemporary, adult ethical debate of urgent relevant issues - alas, this was not to be. This time.

It was a cold night out last night. The Erskineville Town Hall is a cold, uncomfortable make-do, make shift venue, part of the resources of the Sydney Fringe. However, I loved being at the Erskineville Town Hall with the French Santa Productions. It was reassuring to see all these young artists - writers, actors, directors - putting their developed skills and passions onto the stage - knowing what 'sacrifice' they had made to prepare this 'work' for us - writing, rehearsing, probably with little budget - if any. It was exciting and hopeful to be the oldest person in the theatre - the audience I was with a full house, demographically were, probably, in their mid-twenties, and they were there supporting their peers, and with attention, appreciation and generosity. The theatre is not dead, and is a part of the Australian psyche and culture, and is being pursued, generationally, with passion.

P.S. There was no program and I have not been able to find a cast list (as yet) and so no actors have been credited. I appreciate their devotion to this new writing.

N.B. Sent to me later. These are the actors in the above productions:
THE INTERVENTION.
Mary - Jesse-Belle Keogh.
Steve - Luke McMahon.
Joe - Valentin Lang.
Anthea - Elle Harris.