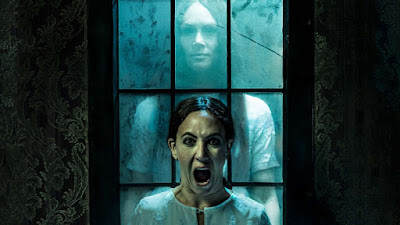 Olivia Ansell, the Head of Contemporary Performance Sydney Opera House, has curated HORROR, a work by Jakob Ahlbom , which she says


... was the cult hit of the London International Mime Festival, before taking Europe by storm.' This production has promised us that this stage show will help us 'remember the first time we experienced sheer terror ... with classic films like THE POLTERGEIST and THE EXORCIST ensuring young people never slept without a night light.

The hype must have worked because this show has sold out - on opening night they had even sold Standing Room! I guess there are a lot of Horror geeks out there - remember the popularity of the Ghost Train at Luna Park - who were prepared for the LIVE challenge of being made to experience 'The oldest and strongest emotion of mankind (which) is fear. And the oldest and strongest kind of fear is fear of the unknown.' I and my companion, in great expectation, bought our tickets (70.00 each) to have just such a terror filled night.

Unfortunately, this HORROR succeeds best as a curious entertainment that has fairly stock theatre/vaudeville, 'magic' tricks of Design, Lighting and Sound, and a troupe of competent Physical Theatre-Dance artists that make not a Homage to the horror genre but, rather, fleeting References to cinematic thrills that we have treasured.

The most fun or 'thrill' I had watching this show was trying to keep up with the many, many references.


Hey, to get us true HORROR fans on board you need more than this safe guessing competition and perhaps, a clearer story for us to travel with (there is no spoken dialogue) - and a lot more provocative grossness to truly shock us would have helped - how about throwing the intestines sprinkled in a shower of blood out to us, in the audience to gnaw on?!!!. (Opera House Workplace Health and Safety Issues, I guess).

If you are a regular theatre goer this show is fairly ho-hum in its skills, nothing 'wonderful' here. You would have to be a neophyte to be wowed by this company's skills, or to be 'suckered' into any of this as horror. As part of a MIME Festival entry (London), the genre that these skills are 'seated' in, might be a novelty, but as HORROR - NOT.

Let's pack-up for a trip to New Zealand to see, experience, SPOOOKERS at that ex-psychiatric hospital that has been set up with a cast of participants to scare the 'shit' out of you as you walk through - they even have a Corn Field rustling outside. It is all LIVE and interactive. Florian Habicht's documentary on this venture - also called SPOOKERS, was screened as part of the Horror Films section at the Sydney Film Festival, in 2017.)

Mime Troupe: five out of ten (too careful in the fight sequences - one could see the technique at work. And, hey, could't we have had some women threatening a man, instead of the usual scenario of threatened 'rape', with three (four?) men versus one woman in a robust fight sequence, you know, just for a contemporary reflection's sake?)

Horror (Terror): One out of ten.

Us Horror geeks are hard to be conned.

Mr Ahlhom's HORROR does not deliver what was promised: "Sheer terror" - NOT.