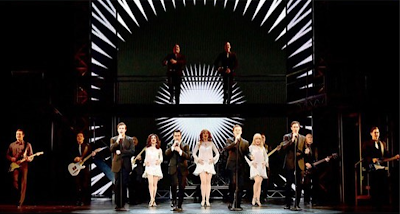 Look, this is the third iteration of this musical, JERSEY BOYS, that we have seen in Sydney. I saw it last in 2011. Since its initial outing on Broadway in 2005, this jukebox musical has continued to survive, all over the world . Please read my other Blog contribution - it all still stands.

The conceit of the work to have the Four Seasons: Tommy De Vito (Cameron MacDonald), Bob Gaudio (Thomas McGuane), Nick Massi (Glaston Toft) and Frankie Valli (Ryan Gonzalez), narrate, each in turn, the story of these men and their career, is a stroke of genius (and equality). The Book by Marshall Brickman and Rick Elice is so streamlined, not a single piece of the 'fat' of sentimentality is heard, that it propels us constantly, dizzily, forward into the Musical repertoire of the Group that is so, so familiar and so, so, so wonderful. The wonder is not nostalgia but appreciation of beauty. Crisp to the heart beat of 'green' love beauty: BIG GIRLS DON'T CRY, WALK LIKE A MAN, MY EYES ADORED YOU, CAN'T TAKE MY EYES OFF OF YOU, WORKING MY WAY BACK TO YOU. Oh, boy, and they are just the 'killer' songs - so many others to savour.

All of this is aided by an industrial-looking framework Scenic Design, by Kiara Zieglerova, aided by a Projection Design, by Michael Clark, of Lichtenstein-like images, that is stark, speedy and narrative simple. Costumes by Jess Goldstein create period and glamour and the Choreography, by Sergio Trujillo, in the nervous tight energy of Opening Night is unfussy but stirring - visually simple, breathtakingly exciting. The storytelling energy of this production under the Direction of Des MacAnuff is like boarding an express train to heaven - you never want to get off..

On opening night Bernard Angel was indisposed and the Frankie Valli Alternate, Ryan Gonzalez, was catapulted into the role. Having watched Mr Gonzalez up close recently at The Hayes Theatre in IN THE HEIGHTS and THE VIEW UPSTAIRS, it was a thrill to see him manage, manipulate and acquit both vocally and choreographically this role with a 'real' actor's ease in the large scale demand of the Capitol Theatre. Move over Lady Gaga, a Star is Born in Sydney, first - ha, ha. Mr Gonzalez is great, leading this show with a phenomenal unflagging stamina and 'beauty'/excitement.

He is supported by excellent performances from Cameron MacDonald, Thomas McGuane and Glaston Toft (who has already amassed, over four years of touring this show, 1300 performances). Glenn Hill has fun as Bob Crewe, as seemingly does everybody in the Ensemble of the show. The women of the Ensemble have little to do but dole what they have with energy and clear precision: Cristina D'Agostino, Mia Dabkowski-Chandler, Mackenzie Dunn.

JERSEY BOYS, still as crisp as last time and a sure fillip of pure joy. Worth the Time. Go.

JERSEY BOYS at the Capitol Theatre: