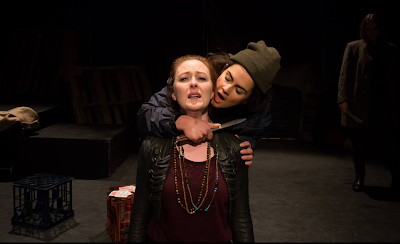 MACBETH is the second Shakespeare that this company SheShakespeare as presented. The first was AS YOU LIKE IT.

If the Mission of SheShakespeare is to provide an opportunity for some actors to perform a role in a text that has usually excluded them, because of gender assignment, then 15 young women have had a go with this production of MACBETH. In doing so Director, Shelley Casey, has adapted the play and changed all the male gender references to female. King becomes Queen; Lord becomes Lady; father becomes mother; husband becomes wife; son becomes daughter; he become she; him becomes her, etc etc. We are, then, in a warrior kingdom of women only - not a man seen, heard or even referenced. A land of sequential Protomdrous Hermaphrodites - presumably, a Scottish one (though not a kilt was seen).

It seems Ms Casey has a vision of the simple storytelling. There are some promising moments of Directorial control in some of the theatrical gestures of her production. But the Design, both Set and Costume, as elements to create atmosphere for the storytelling needs much more consideration - it looked non-descript, a visual mess, and the production would probably have been better served with a bare stage - an open space.

The production begins, it speaks through five acts, and finishes. There is no other dramaturgical point-of-view as to why SheShakespeare has chosen this particular play. Why MACBETH? What does it say to us today? What does this all female Shakespeare company want to say with this play with this production in Sydney, in 2018? Actors are called by their scripted names and essentially 'gabble' the lines and move about the stage in ordered groups. Some have been coached in some very active and efficiently choreographed 'fight' scenes by Kyle Rowling. And interpolated into this production are some songs, of lament, of cheer, of celebration - though their contextual usefulness in the story of Macbeth was elusive. There was no character distinguishing, no motivation or back story.

The hallmark of this opaque production is the undoubted commitment of the ensemble to the performance. One could not deny the supportive energy. The difficulty is that the experience or skills of this company is widely disparate and resultedly the clarity of it all is very muffled. One simply needed better actors, or better prepared actors, to be working on a text of heightened language/poetry, dense in its vocabulary and circumlocution, and unfamiliar in its expression to be understood easily by the modern ear. The responsibility of the actor always is to create character, to tell a story, to reveal the metaphoric relevance, and, lastly, to celebrate the use of language - the joy of English.

Interestingly, the clearest and most engaging scene in this production of the play was that between Grace Naoum, as Malcolm, and Erica Lovell, as Macduff, (belatedly, Cassady Maddox as Ross) in the notoriously difficult England Scene, of the second act. It was a long time to wait for something more than a gabbled gist of language usage to create with. Accuracy of word by word enunciation and the imaginative developing of the logic, argument, of the speeches from Ms Naoum, was a respite of relative clarity in this long night in the theatre.

Beth McMullen in the titular and famous role of Macbeth (it has made or broken the reputation of actors), does not have the charisma of a warrior or the vocal or physical skills of a leading actor. It is not enough to pull one's left hand down the bridge of the nose and squeeze the nostrils  between thumb and index forefinger and then flick its end with the same left index finger and stroke the fingers from the centre of the upper lip to the edges, and draw open the mouth and pull open the jaw hinge, stroking down the cheek to the centre of the chin, and then flick the hand to the finger tips in a gesture swingeing down away from the body to signify warrior status - it was the signature gesture, oft, tediously, repeated. The chemistry that motivates this warrior and her wife Lady Macbeth (Emily McKnight), to commit regicide and then many, many other slayings did not exist. There was no central driving force of quandary.

Most of these actors had no discipline of vocal or physical skills to have me believe that they were what they said they were. I hoped that the actors had studied the performances in the opening Act of the 2017 film of WONDER WOMAN, and watched the choices of characterisation employed by Gal Gadot (Diana), Robin Wright (Antiope), Connie Nielsen (Hippolyta), to play the female Amazonian warriors on the island of Themyscira. Look at the warrior women portrayed in BLACK PANTHER. Preparing the instrument for the playing of SheShakespeare MACBETH's female warriors, obviously needed more attention.

Whilst I admire the formation of SheShakespeare the Artistic Vision needs to be more defined, clearer in production intention and better supported with well prepared (trained) actors. Much, much more rigour.

(They) have no spur,
To prick the sides of (their) intent, but only
Vaulting ambition, which o'er leaps itself,
And falls on th' other.

N.B. 1. No Bio-graphical note of the writer of this play. The writer, Sydney-typical, ignored.
2. The Donmar Warehouse trilogy of all Female Shakespeare productions, Directed by Phyllidia Lloyd, are to be screened late this year on BBC Television: JULIUS CAESAR, HENRY IV AND THE TEMPEST, featuring Harriet Walter.